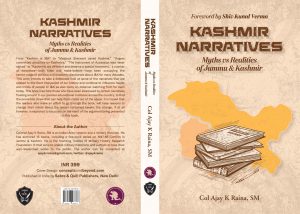 ‘Kashmir Narratives: Myths vs Facts of Jammu and Kashmir’ comes across as a bold, hard-hitting piece of work that is devoid of attachments and biases that tend to creep into works of this nature. Authored by an established Military Historian, Col Ajay K Raina, SM, the work follows the pattern of his earlier books wherein he has brought out facts, tales and anecdotes that have never been told before. In this book, however, he goes a step further and ruthlessly bares the motives, agendas and reasons behind some of the biggest misconceptions that willy-nilly get associated with the erstwhile State of J&K.

Backed by some real deep research, the book covers the issues related to Dogra rule from the middle of the 19th Century and some of the most important developments that happened in 1947. The author, while focusing on the events of that era, relates them to the present-day situation in the region. While writing on individual narratives—and there are 28 such narratives—the author lays down the statement of the narrative, does a brief fact check, carries out a detailed analysis and then concludes with an endnote. The format, common to all the narratives being examined, is reader-friendly and easy to comprehend. However, what is remarkable is the amount of research that has gone into the work. In addition to the usual works that are invariably quoted in any work related to J&K, there are some unique quotations that, if read in greater detail separately, can throw open a new world to the seekers of knowledge about J&K.

Some of the agenda-driven narratives that have, over the decades, become part of the belief system and are now believed as historical facts stand challenged in this book. The range of narratives is vast and follows the timeline of the events that have happened.  Some of the beliefs put under scrutiny include deliberate maligning of the Dogra rulers, victimisation of Kashmiris, pertinent legal issues related to the sanctity of the Instrument of Accession, bids to overshadow atrocities on Hindus and Sikhs in the Jammu region, a convenient name given to the invaders, the conditionalities attached with accession, Pakistan’s claim based on geographical contiguity, patronisation of a local hero as the saviour of Kashmir, massacres of Muslims in Jammu, the idea of secularism as it applied to Sheikh Mohd Abdullah, aspersions against J&K State Forces, the promises made by the Indian Government, annexation of Gilgit and even a political invention called Kashmiriyat. As the chapters switch from one narrative to another, the role of the British, follies committed by an inexperienced Indian leadership and macro issues connected with the ongoing Great Game, too, get covered in adequate detail.

Shiv Kunal Verma, the reputed author of books like 1962: The War that Wasn’t and Long Road to Siachen, has written the Foreword to the book. In line with the theme of the book, he, too, mentions an interesting anecdote about Alastair Lamb’s claim about the Indian leaders during those turbulent days of October 1947! The book, therefore, makes an interesting read from its first page to the last.

Printed on fine quality paper, the book is available in both paperback and hardcover formats as also as an e-book on Kindle. Published by Sabre & Quill Publishers, the book was written under the aegis of Military History Research Foundation ®.

If the work has to be described impartially in one sentence, it would be fair to call it courageous work. Such conviction and confidence can only come in if one has a deep knowledge and a fair sense of history; the author appears to be blessed with both.

Finally, if knowledge is a weapon, this book is capable of arming its readers to the teeth. A must-read by the students, commentators, observers, historians and debaters who deal with J&K or have some kind of interest in the affairs of the erstwhile State.