Home About Us Director General 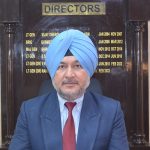 Lt Gen Ranbir Singh, PVSM, AVSM**, YSM, SM (Retd) as the General Officer-Commanding-in-Chief (GOC-in-C) Northern Command. The General Officer is an alumnus of Sainik School, Kapurthala & National Defence Academy, Khadakwasla. He was commissioned in the 9th Battalion, The Dogra Regiment. He has held various important Command, Staff, and Instructional appointments during his career. His Command assignments include Company Commander in Siachen Glacier as also in Counter Terrorist Operations in Jammu & Kashmir, Commanding Officer of a Battalion deployed along the Line of Control in High Altitude Area, Commander of a Mountain Brigade in Counter Insurgency Operations in the North East, General Officer Commanding of an Armoured Division and a Strike Corps. His staff appointments includes that of Staff Officer with the United Nations Peace Keeping Assignment Mission at Rwanda, Chief Operations Officer of the United Nations Mission at Sudan, and several stints in the Military Operations Directorate at Army Headquarters He was the Director General of Military Operations wherein the General officer was responsible for planning and execution of surgical strikes against terrorists in Myanmar in 2015 and Pak Occupied Kashmir in 2016, and was the face of the Indian Army when he announced these strikes to the nation and the world. He has also held the coveted appointment of the Deputy Chief of Army Staff (Information Systems and Training). His instructional appointments include tenures at National Defence Academy, Khadakwasla, and the Counter Insurgency & Jungle Warfare School, Vairengte. By virtue of his vast experience, he is considered to be an expert at counter-insurgency operations, operational art, and information operations.

The General Officer has attended the prestigious Royal College of Defence Studies Course in the United Kingdom. His academic accolades include an MSc from Defence Services Staff College, Wellington; MA in International Relations and Security from King’s College London, MPhil in Defence and Management Studies from Army War College, Mhow; M Phil in Defence and Strategic Studies from National Defence College, New Delhi, and a Ph.D. in Disaster Management.

The General officer assumed the appointment of Director General, Centre for Land Warfare Studies on 14 Feb 2022.

Articles Dokku Nagamalleswara Rao - December 2, 2022
0
What is causing nationwide anti-lockdown protests in China? Since, the fire incident, at an apartment block in Urumqi, Xinjiang that took 10 lives was...