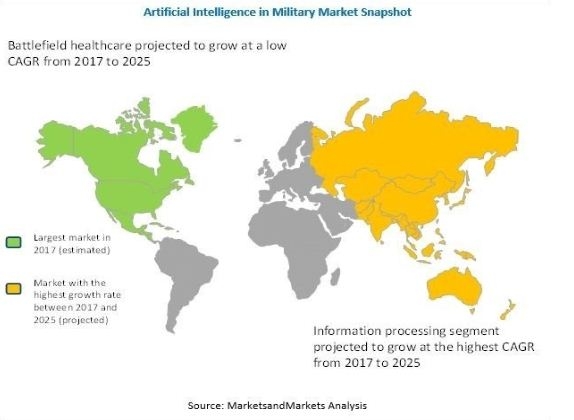 In contrast to the bipolar world order during the Cold War, the world today witnesses multipolarity characterised by the existence of Nuclear Weapons States (NWS) such as North Korea. This multipolarity has led to a significant shift in the strategy of warfighting. The modernisation and overhauling of the force structure of the militaries around the world have created anxiety of the first strike by the adversary. This has led to the strong urge for the development of more complex and sophisticated technologies for the detection of a first strike by the militaries around the world. Such strive for technological superiority is linked to the idea of deterring the adversary with more precise forms of detection, retaliation or even first strike. In course of nuclear modernisation, countries like United States, China and Russia are exploring opportunities for strong deterrence by manoeuvring emerging technologies such as AI. There is a high possibility that nuclear force modernisation coincides with Artificial Intelligence in the near future.

The urge for Artificial Intelligence and its induction into the battlefield has led to striking similarities of Cold War days. During the Cold War, in the 1950s, two nuclear blocs feared their adversary’s numerical and technological superiority. Today, the similar anxiety for technological sophistication in AI can be seen among US, Russia, China and emerging militaries. The Russian President Vladimir Putin in a meeting with the top Defense Ministry officials in Moscow hinted “AI is key to Russia in beating the US despite the budget gap.”[1] United States Department of Defense sees advancement in AI and Autonomy as the “Third Offset Strategy”.[2] China is not lagging very far in this race. The Chinese premier Xi Jinping has given the call for China to be ‘global AI innovation centre by 2030’.[3]  Speaking to Central Military Commission (CMC), he asked China to move ahead by fusing advanced technologies like big data, cloud computing and AI for the Communist Party’s People’s Liberation Army (PLA). Apart from these global players, regional powers such as India, Israel, Japan, United Kingdom and others are also exploring such capabilities.

The connection between Artificial Intelligence and the Nuclear Weapons dates back to the 1950s and 60s. The period of the Cold War saw the employment of AI into the Nuclear Weapons Systems. They were used both by the Russians and the US for enhancement of the retaliatory capabilities with swift decision making in command and control process. Early application of AI in Nuclear Weapons included early threat detection of a first strike and available responses for retaliation to a first strike. ‘The Dead Hand’ project of the Russians was reported to be an automated system which was created to launch surviving ICBMs at the United States in case of any complete annihilation of Russia’s nuclear arsenal.[4] The United States had also allegedly explored the possibility of induction of AI into its nuclear forces. Survivable Adaptive Planning Experiment (SAPE) was one of the United States’ crucial projects which aimed at targeting ICBMs of Russia by translating the reconnaissance data into targeting plans, thus enhancing the counterforce strategy of the United States. [5]

Armed forces around the world have already recognised AI as part of their future strategy. The sharp trajectory of advances in computing and other tech advancements is sure to have a major impact at the larger strategy both at the tactical and operational levels. The pace of development in AI and its use in Strategic level is due to the ability of AI in making more swift, precise and meticulous decision in real time. The power of reconnaissance, precision strike and complete destruction of targets gives a complete unpredictability of intentions and capabilities of the adversary thus altering the strategic stability between countries. [6]
US, China, Russia and other major armed forces around the world are struggling to actualise the unmatchable potential of AI to augment analysis and decision-making capabilities in real time. Such significant progress is happening at phenomenal speed in various countries in air, ground and sea. This comes as no surprise that military around the world today have active research and development (R&D) programs simultaneously with the active deployment of some of these technologies for the military purpose.

Today, what drives the Chinese dream is the motivation of surpassing the United States in advancements in AI. The Chinese premier has prioritized AI at the highest levels as a core aspect of national and military power. China’s AI in military calls for the application of hi-tech AI to support command decision-making, military deduction, defense equipment and other areas. [7] This will impact the Chinese decision making of its overall strategic defence which in future may include its decisions in nuclear strategy as well. Leading the race, the United States past experiences with the AI such as Drone Technology has been key driver of the research and development. The budget request for research and development in AI included $12-15 billion. These funds aimed for research and development programme on war gaming and new technologies – including wearable electronics, autonomous weapons and unmanned aircraft and deep-learning machines.[8] According to Reuters, Pentagon is also carrying out a secret programme which uses AI as tool for precise detection of the nuclear arsenal of North Korea and of others.[9] If the research turns into reality, AI machines will be able to process huge amounts of data, including satellite imagery, with a speed and accuracy which is beyond the capability of humans. The report also says that the Trump Administration has proposed more than tripling the funding in 2019 budget to $83 million for just one of the AI-driven missile programmes. Just a little behind stands Russia which is also in the race of AI driven defense strategy. In 2015, Russia revealed its nuclear powered under water sea drone which is capable of carrying a thermonuclear warhead. A robust use of AI, the Oceanic Multipurpose System Status-6 is capable of overcoming any enemy defences put in its way. Through this programme, Russia has been exploring AI in order to boost its retaliatory capabilities against the United States’ nuclear superiority. Apart from this, Russia is annually spending around approximately $12.5 million a year on AI driven research which is much behind of China and the United States.[10]

Impact of AI on Nuclear Strategy

The History of Cold War has been the testimony of almost a triggered war between the United States and Russia when Soviet satellite (Early Warning System) misinterpreted flashes as missile launches. It was the human interference which led to a decisive judgement that the early warning was a false alarm but not an attack. However, presently, the AI has unmatchable abilities which can boost the early detections capabilities and improve the analysis of intelligence, surveillance, and reconnaissance data. Given the current pace of nuclear force modernisation where militaries are exploring opportunities for strong deterrence, AI and force modernisation are likely to coincide in future. This brings a lot of uncertainties which will impact the strategic stability in the near future. There have been clear indications of the advancement of military applications such as killer robots, autonomous weapons systems and various others. The recent development in terms of intelligence and decision making by AI has marked enormous development. Deep learning models in which algorithms are capable of decision making even without supervision. The ability to statistically analyse and assess making a real-time decision does have tactical and strategic imperatives for the military operations. However, what is driving the rampant development of AI in the military is the increasing volumes of data which it can process. It can provide ground troops with sufficient amount of decision support where it is almost difficult for normal systems to access and analyse. It is not only going to change the larger dynamics at the strategic level but also at the operational level, making it more effective.

Given the unprecedented advancement of AI, the nuclear states around the world are likely to manoeuvre AI to strengthen its nuclear strategy. The AI capabilities are likely to have both positive and negative impact on nuclear strategy for countries individually. AI will equip nations with better data processing, surveillance, accurate analysis of data inputs as well as more robust form of early detection of any first strike and control any escalation due to miscalculations. However, the negative impact of AI includes the ambiguity for nations against their adversary’s capabilities. This can lead to miscalculations, thus disturbing the strategic stability. The unpredictability could also lead to development of asymmetric form of defense which can lead to escalation in worst cases. Also, the increase in the precise strike can also lead to complete destruction of the nuclear arsenal leaving no room for a second strike. The anxiety of complete destruction of nuclear assets can fuel the arms race with more and more strategic assets on active deployment which will have serious impact on the strategic stability between nations.

Like every major armed force, India has also been looking for leveraging the benefits of AI into its military strategy. Prime Minister Modi in his address to Defense Expo in April 2018 highlighted that emerging technologies such as Artificial Intelligence and Robotics are the most important determinants of defensive and offensive capabilities and India, with its leadership in the information technology domain, would strive to use this technology to its advantage.[11] An AI Task Force constituted under the Ministry of Defence on Using AI for Achieving Military Superiority argued for utilisation of the significant power of AI in defence, specifically in the area of aviation, naval, land systems, cyber, nuclear, and biological warfare.[12] However, there has not been any clear roadmap for India to leverage AI and its capabilities when it comes to strategy at a broader level such as Nuclear Strategy. India must realise that it lags far behind in terms of utilisation of AI into its tactical and strategic level. At present, as per the open source, the Armed forces and the Indian Army in particular does not hold the data and records of the exercises and war gaming. For India to leverage the ability of AI, it needs huge amount of data which can be used by algorithms in assessments. Armed forces need a strong infrastructure for securely saving databases for further utilisation of AI in the Indian Armed Forces.

Presently, on a smaller scale, Research and Development on AI are looked after by Centre for Artificial Intelligence and Robotics (CAIR) under Defense Research and Development Organisation (DRDO) which works on Net Centric Systems for Tactical Command Control & Communication Systems, Intelligent Systems, Unmanned Systems and Information Security. However, India still lacks in a proper infrastructure and policy framework which could support its research and development programmes on AI. Given the pool of talents in information sciences and technology, India must tap its potential which could provide indigenous solutions to military strategy. More public and private engagements could also lead to explorations of potentials of AI for military purpose. Future wars are going to be fought with technologies such as AI. The earlier India realises its importance, the less it will lag behind against any potential adversaries in future.

Changing Nature Of India-China Relations: Powershift in the Indo-Pacific