President Xi Jinping was on a two-day (17th and 18th January 2020) visit to Myanmar and this was the first visit by a Chinese president after Jiang Zemin in two decades. The President has been visiting the countries of Indian Ocean Region (IOR) and announcing new Chinese projects. As part of his diplomatic visits, he started with Maldives[1] and Sri Lanka[2] in 2014 followed by Pakistan[3] in 2015 and Bangladesh[4] in 2016. The recent visit to Myanmar was in line with his visits to make inroads in the IOR. During the Myanmar visit, President Xi’s agenda was on similar lines with his past visits to other countries of IOR. This region has got prominence in Chinese foreign policy after the announcement of Belt and Road Initiative (BRI).[5] An analysis of all his visits to the countries of the IOR reveals that during the visits he has focused on three things. These are: deepening its economic engagement, boosting the infrastructure of the host country and enhancing its connectivity with the countries of IOR as they are a vital cog in the BRI.

The joint statement clearly showed the focus area of the visit was the China-Myanmar Economic Corridor (CMEC). During the visit, China-Myanmar signed a total of 33 agreements[6] comprising of Memorandum of Understanding (MoUs), Letter of Intents, Protocol Documents, Handover Certificates and Exchange Letters.  An analysis of the signed agreement shows two things. Firstly, CMEC centrality and secondly, its cautious approach towards the Chinese investment. 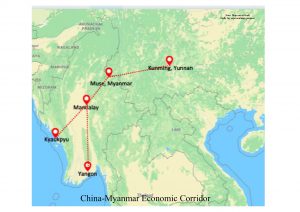 The ‘Y-shaped’ corridor was in focus as out of the 33 agreements 14 were related to CMEC. China is investing in Myanmar as it is part of China’s larger vision-BRI. This corridor aims to connect Kunming, Yunnan province of China through Mandalay to Kyaukpyu and Yangon in Myanmar. Once complete it will provide it with the shortest route to IOR which in turn will reduce its dependence on Malacca strait. Secondly, eight agreements out of the 33 were related to feasibility study. China understands the importance of Myanmar for the progress of the BRI in the IOR. The three crucial pillars of CMEC- the Kyaukphyu special economic zone (SEZ), the new urban development of Yangon city and China-Myanmar economic zone was strengthened with the signing of new MOUs to further the development of these projects.

Despite all these facts the economy of Myanmar is not in great shape due to the rise in negative sentiments. In the last five years, its economy has gone from bad to worse. Its GDP growth rate has fallen from 8.2 percent in 2014 to 6.8 percent in 2018.[7] The poor performance of Kyat led to an increasing debt. As the value of the US dollar to Kyat dropped, the debt, both domestic and external, approximately doubled from 2014-15 to 2017-18. The domestic debt rose from 12, 484 Kyat billion to 20,724 Kyat billion and external debt rose from 6,133 Kyat billion to 13,892 Kyat billion.[8]  Foreign Direct Investment (FDI) which is considered essential for economies of developing countries has been falling sharply. The total FDI received by Myanmar has gone down from US$ 8010 million in 2014-15 to US$ 4,158 million in 2018-19.[9] The major reason for this fall has been the FDI from the countries of the West, such as the USA, the U.K, Netherlands etc. has almost dried up due to the increasingly negative sentiment towards Myanmar after the Rohingya crisis which has been termed as genocide. 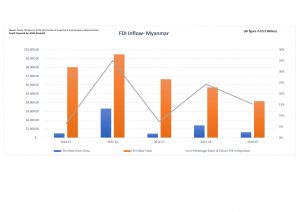 Myanmar’s cautious approach towards Chinese money can be seen by the fact that nearly 25% of the signed agreements were related to feasibility study. The cautious approach is followed by Myanmar due to the scrutiny of BRI projects in Asian countries such as Malaysia and Maldives post-Hambantota episode. The feasibility studies achives dual purpose for Myanmar. Firstly, it has allowed Myanmar to accommodate Chinese investment-related demands. Secondly, it has bought time for the host Myanmar to evaluate the need and cost of the project. The present government is also sensitive to public sentiment as General election is due this year. This is the major reason why there was no mention of the Myitsone dam project anywhere in the joint statement project as it has faced severe backlash from the local population. The leasing out of Hambantota port to Chinese company has made a lot of countries of IOR region cautious about the BRI projects.

China finds this moment apt to expand its economic engagement in Myanmar. It has come to the aid of Myanmar. It tried to fill this void left by the West and its share in Myanmar’s total FDI investments has  increased more than double  from 6 percent to 15 percent during the same period.[10] It is now the second-highest FDI investor after Singapore, however, China has the highest number of enterprises (430) operating in Myanmar.[11] Chinese engagement in Myanmar is dynamic and as it shares a relationship with all the major actors which are: government, Tatmadaw and Ethnic Armed Organisations (EAOs). It is engaging with all actors, particularly with the EAOs as number of its strategically important projects such as the Kyaukpyu SEZ lies in the Rakhine region where EAOs have considerable influence. This is the reason why China is now playing an active role in the peace process. It has achieved some success as the Arakan Army has also declared support towards Chinese investments in Rakhine.

The chances of any breakthrough in the peace process look rare but this will not impact the Myanmar-China relations. Both the countries understand each other’s importance and are moving forward keeping their national interest in mind. However, the trajectory of the relationship between Beijing and Naypyidaw will also depend upon the attitude of the West towards Myanmar. As the Western isolation had pushed Myanmar towards China the continued isolation will further lead to an increase of Myanmar’s dependence on China.

The increased dependence of Myanmar on China will have a three-fold impact for India. Firstly, it will impact our foreign policy goals. With ‘Neighbourhood First’, ‘Act East’ and growing importance of BIMSTEC; Myanmar makes it a vital cog in Indian foreign policy. Secondly, Myanmar has oil and gas deposits which will be needed for India’s growing energy needs. Thirdly, enhanced connectivity between India-Myanmar will aid the development of India’s North-Eastern Region.

Myanmar’s cautious approach towards Chinese investments shows that it is willing to diversify its relations beyond China. This presents a window of opportunity for India. It should work towards boosting its engagement with Myanmar. This will be a win-win situation for both the countries, as India will be able to contain the Chinese influence and Myanmar will be able to reduce its dependence on China.

[9] Directorate of Investment and Company Administration, The Republic of the Union of Myanmar, Yearly FDI Report- 2019, Available on internet on

[11]Yearly FDI Report- 2019, Directorate of Investment and Company Administration; The Republic of the Union of Myanmar, Available on internet on