The Indian Security Forces have been embroiled with Pakistani state-sponsored terrorism in J&K since the time Pakistan first used mercenaries wholly backed by its Army to invade Kashmir in 1948. The stated policy of Pakistan is to build a narrative of an indigenous uprising of the local population against perceived illegal occupation by the Indian state. Towards this end, Pakistan continues to try and radicalise the local youth and draw them into terrorism through the provision of training, arms, and ammunition. The Pak military actively supports training camps set up in Pakistan Occupied Kashmir (POK) and provides safe and secure launchpads for the terrorist to attempt infiltration across J&K. The Indian Army is entrusted with the maintenance of territorial integrity of the land borders of J&K since it is a disputed boundary with Pakistan. It has established a Counter-Infiltration (CI) grid in multiple tiers assisted by an obstacle system known as an Anti-Infiltration Obstacle System (AIOS). The system is assisted by technological innovations and humongous amounts of surveillance systems both optical and electronic which need to be manned 24×7 to timely detect infiltration attempts. The entire grid is fed with intelligence and surveillance data from multiple agencies like the R&AW, NTRO, IB, BSF, CRPF & State Police, etc, which is then analysed to plan physical domination of the areas by patrolling and ambushes as well as maintenance of an aggressive forward posture to dissuade the Pakistani Army from planning and assisting infiltrating terror groups. However, such a system has its drawbacks in terms of requirements to be alert 24×7 and prioritise each intelligence input[1]. This creates a complex paradoxical dilemma in the minds of commanders at each level who need to allot priority to these inputs.

While humanly it is difficult to work out the probability of the event occurring as given out in the intel input, most of the commander’s decisions are based on his/her experience of the area which is a variable. Thus, this challenge of predicting the probability of occurrence of an event of infiltration as per an intel input can be overcome through the application of AI-based models which can help in predicting the probability of the likely location of future infiltration and thus act as a decision support system to prioritise intelligence inputs on which actions to thwart infiltrations can be planned and undertaken. Recent developments in niche technologies like Big Data Analytics, AI, and ML-powered by the exponential increase in computational speeds of computers allow for carrying out such prioritisation while sifting through humongous data being generated by various intelligence agencies.  Artificial Intelligence & Machine Learning (AIML) tools are today powerful enough to capture, study and provide the desired probability of outcomes from a disparate dataset warehouse which may contain a variety of structured and unstructured data. Within the ambit of AI, Random Forest-based probability prediction is a powerful Machine Learning (ML) based model which is being used in the civil industry like finance and sports to predict the movement of stocks or predict the probability of wins of a particular team based on past data which is used to train the ML model. The probability of any event is associated with the success rate in the context of the likelihood of future events which decide the confidence level, but the element of getting unsuccessful in the experiment also goes hand in hand. To overcome this ambiguity, predictability comes into the picture which uses statistics for analyzing the frequency of past successful and unsuccessful events. The correct decision-making process largely depends upon the human bias and accuracy of this predictability notwithstanding the inherent risk involved in predictability[2].

While the type of model to be used for the prediction will be determined by the training data set available and also the accuracy of scores obtained in the testing phase. The Indian Army has been deployed in the region since 1947 and heavily involved in CI operations since the late 1980s. The army formations have a huge historical database of actual infiltration attempts taken place including those which were successful and those which were foiled. This data includes data on the locations where these attempts were made as well as the exact time and date of the attempts including data on intelligence agency inputs that corroborated the attempts. Thus, this comprehensive database which is based on actual intel inputs and actions which have taken place can be utilised to train and test the ML model which is evolved. The challenge, however, will be to collate the database as data points though available may not be available in one place. This collation of data would be a major exercise post which training and testing will not be a major issue. The various variables which need to be collated would include historical data of the various factors like the location of infiltration (aided by GIS input), weather and season patterns of that time, time of the day when the attempt took place, grading of intelligence source which provided the input, type of source from which intelligence has come, the agency which has shared the input, the target terror group, etc. Once this database based on actual past data is collated and made ready, the same can be used to train and test the ML model which can then successfully predict probabilities of likely infiltration as given out in current intelligence inputs which are regularly received by the Army formations thus allowing for prioritisation of countermeasures by commanders on the ground. The suggested system (Table 1) should consist of the following sub-parts:- 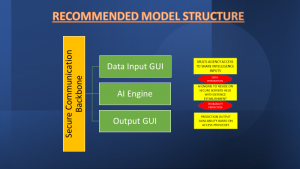 The suggested project should be taken up under the Make category with the involvement of Indian-based companies working in the field of AI. This will ensure better access to sensitive historical data to the developing agencies as the government will be a major stakeholder in the project.  A suggested development roadmap for the project is given out in table 2 below:- 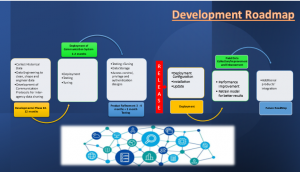 Decade-long terrorism in J&K has scarred the population and prevented meaningful economic and social development. The abrogation of Article 370 has presented an opportunity to both the lawmakers and the civil society to infuse development in the state. The effects of hurdle-free development are beginning to be seen in many areas in J&K. This has unnerved Pakistan which sees itself losing the leverage it once had over the local population. It will therefore try its level best to put in place innovative measures to infiltrate more and more terrorists in the coming season and time to aid locally radicalised youth. The availability of a huge amount of computing power and sophisticated AI-based Data Analytics in the world today allows for the inclusion of specific AI Models in government white papers and strategy formulations[3] which can be used to give the security agencies an informed edge aided by an AI-based Decision Support System which will allow the decision-maker to co-relate his or her experience supported aptly by data[4] to empower him/her to correctly prioritise counter actions which can pre-empt or prevent infiltration attempts and thus curb the menace of terror and prevent valuable Human Resources being sacrificed at the altar of Pakistani state-sponsored terror packaged as religious fundamentalism, fanatism, and indigenous uprising.