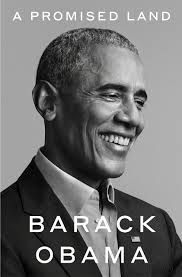 A Promised Land, is the first in a planned two-volume series memoir. What makes this book exclusive and interesting is the fact that the author is a former President of the United States, President Barack Obama. Published on November 17, 2020 by Crown Publishing Group in the United States and Viking in the United Kingdom, the book provides great insight on the author’s first term as the President of the world’s oldest democracy.  The book provides minute details from a policy maker’s notes before making decisions that effect the entire International community.

Looking at the way he frames his (self-)portrayal, two things stand out: Obama identifies instances and tendencies that, from his perspective, lead to the rise of Trumpism, like Republican obstruction politics or the normalization of figures like Sarah Palin. The book has both poetry as well as prose, but the prose allows the reader to understand the difficulty of achieving any legislation in the current climate of partisanship and multilateralism. As a work of political literature, A Promised Land is impressive. It discusses a wide range of policy questions that rose during the president’s term in office including bailing out the banks and auto industry, to his healthcare plan, the withdrawal of the American troops from Afghanistan. The facts of the events during the president’s presidency are well written and give the reader a clear picture of things that were going on during that time. President Obama delivers his most truthful account of each crisis and explains how he handled each issue while engaging support from both democrats and republicans. Obama enthralls the reader by pulling them into the inside the Oval Office and the White House Situation Room, and to Moscow, Cairo, Beijing, and points beyond. The book treats the reader with respect and draws attention to the President’s humanity and humanitarianism.

The book is beautifully written in prose and lyrical passages that are both captivating and informative. The book encourages the reader to understand President Obama’s eloquent, cosmopolitan, nuanced, and consensual PR style. His method of pragmatic diplomacy brings out the stark contrast between the Presidency and that of his predecessor President George W Bush who was monosyllabic, parochial, brash, and divisive. The book highlights the imperative that his presidential predecessor highlighted Obama’s strengths and made Americans hopeful right after his Presidential candidacy.

While a 700-page book makes seems too lengthy, the book examines and addresses a wide range of issues in a crisp and concise manner. The author shows great precision at explaining and summarizing fairly complex ideas in a few short paragraphs. The 700% increase in drone strikes in Pakistan receives just a couple of lines here; the escalation in deportations gets only a paragraph; the prosecution of twice as many whistle-blowers as all his predecessors combined is not even mentioned. Among the several issues that have been addressed, the President’s decision to bomb Libya with European approval stands out because the aftermath of this decision is not accounted for. His side of the story is not, of course, the whole story. In one of his interestingly drawn-out recollections, Obama recalls a meeting with Wall Street executives after the financial crisis in which he ripped into them for their lack of restraint over bonuses, and they left, he believes, feeling he was anti-business. On a deeper analysis of the book, the reader may wonder if Obama came to power in the middle of a financial crisis and two failed wars under the banner of hope and change, only to offer continuity.

The president discusses his trip to India in less than 2000 words out of which the most-talked-about portion is possibly the President’s first impression of Rahul Gandhi. Obama calls the leader of the Indian National Congress ‘a young man who lacked either the aptitude or the passion to master the subject’. The author was all praise for the then Prime Minister Dr. Manmohan Singh. However, the reader is left anxiously waiting for the author’s spectacle of the current Prime Minister of India, Narendra Modi.

The President seems quite willing to admit his mistakes and establishes a sense of confidence in the reader’s ability to understand spontaneous yet tactically complex decisions. His conviction throughout the book remains that democracy is not a gift from on high. It is something founded on empathy and common understanding and built together, day by day. President Obama is not only a charismatic leader but also an efficient and magnificent writer and his book is a riveting and deeply personal account of history in making. The global community awaits the second book in the series by the president who inspired crores of American’s to believe in the power of democracy.