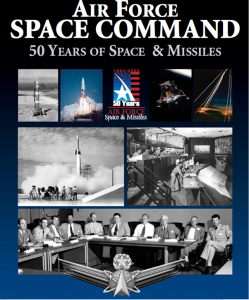 The book Air Force Space Command: 50 Years of Space and Missiles is published by Faircount.  It marks a special event and is a celebration of the presence of the United States Air Force (USAF) in space for over 50 years.   In effect, it was the formal space force of the Armed Forces of the United States.  It was active for 37 years from 1982 to 2019. Its main role was specialising in space warfare.  It has seen operational wars like “1989 US invasion of Panama” and the Gulf War probably known as the First Space War.  Currently, its successor is the United States Space Force.

The book starts off with the groundwork for the genesis of Air Force Space Command, nearing the end of 1945 General Henry Arnold recognised space as the new frontier to be dominated.  USAF started the development of ballistic missiles. What followed was a series of advancements in army launch vehicles and spacecraft. The changing dynamics of the US-Soviet Union led to camera-carrying balloons taking aerial photography of Soviet airspace.  There was a missile gap as the Soviets successfully placed Sputnik in orbit.  Whereas, the US failed in five high profile launches.  Satellites became the only alternative for intelligence collation over “denied geography”. The establishment of NASA in 1958 inspired and gave the space program a new impetus.

The book contains letters from eminent military and political stalwarts. They provide a unique perspective from the many years of their service.  They provide an insightful introduction to this book. They reminisce over the past and future of USAF in Space. They encourage private players to build missiles for the protection of the United States.  During this time the military extended its capabilities to reach for space.  In the words of Under Secretary Peter Teets “….the next fifty years National Security Space will continue to be a vital asset serving diplomatic, military and economic needs in peace and war”. He stresses the importance of space capabilities, which will impact all wings of armed forces both enlisted and civilians. He signs off with remarks of future proof technologies in the present age and makes US a booming military superpower.

Apart from the appreciation notes, there are in total 13 articles from various experts in the field of defence. The main underlying theme of all of them is that they trace the development of USAF Space Command history from its beginning to the most recent times; the role it played in the early days of space warfare.

The absence of a unilateral space command and separate offshoots led to the merger for a more centralized Organization There was restructuring with the formation of the Space Systems Division. Different organizations like Aerospace Defence Command and Strategic Air Command took the role of missile warning and reconnaissance respectively. Towards the beginning of 1980, the USAF established officially the Air Force Space Command and thereby integrating all the divisions. This was highly useful in the Vietnam War as they provided the troops with weather details.

The book further discusses the history of missile programs starting from Atlas, Thor, Titan, Peacekeeper and eventually Minuteman.  Project Mercury utilized Atlas rockets and Project Gemini used Titan rockets emphasizing the role of Inter-Continental Ballistic Missile (ICBM) in space affairs.  They were stored in hardened silos to protect them from enemy nuclear attacks. The war on terror Operation Iraqi Freedom haS reinforced the role of AFSC. The satellites provided battlefield awareness to the soldiers to keep them a step ahead in their missions.

All in all, the book encapsulates the history of satellite technology and definitely not undermining the role of USAF as they reach greater horizons in their military might. The book justifies the statement – “The rockets and the satellites, spaceships that we’re creating now, we’re pollinating the universe” by Neil Young.

Personally, what I liked most about the book is the incorporation of a historical account which does not ennui the readers.  This book makes us realize how important and indispensable satellite technology has become and with the advent of smartphones navigation has made our lives easier. We must pay attention to how small inventions can affect the bigger picture and add to our comfort in the longer scheme of things. The articulation and views expressed make this a compelling read for all individuals interested in space advancements.

It is evident and obvious that the growth trajectories in space power will be different for different countries, however with this book we can visualise the innumerable challenges faced by the US.  It is not just an individual attempt of placing humans on the Moon in the Apollo series of missions. It also highlights the various failures.  Going forward embracing and learning from them is quintessential in making steadfast progress.

The book has a rich collection of photos that have been sourced from archives. As there exists a collection of articles from different authors, the writing styles differ vastly, yet it showcases the expertise of these accomplished individuals in its entirety.  It is easy to understand and is constantly keeps the reader engaging.  I found it useful as the book follows an easy and simple to understand language that is intriguing and gripping at the same time.

In conclusion, the future lies in looking beyond conventional warfare techniques and the exploitation of space. In 2019, the Air Force Space Command was renamed and reorganized into the United States Space Force. Hence, joint cooperation is of utmost necessity from nations looking to play a bigger role in future world politics and the United States as always plans to lead the race however now has more partners than ever before with India leading the way.

Articles Dokku Nagamalleswara Rao - October 3, 2022
0
Tensions along the Line of Actual Control compelled India to give away its symbolic South China Sea Policy. It is worth taking time to observe...