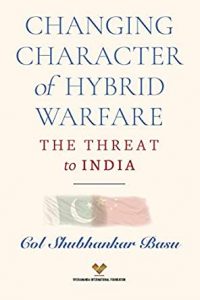 During the emergence of the Cold War, US Secretary of State, John Foster Dulles, said, “The ability to get to the verge without getting into the war is the necessary art”. These words have the same truth and meaning behind them today as it did in 1956. While Sec. Dulles’ said the statement to stand up against communism, today, we can see now the para-effect of the sentence has dramatically evolved.

The book, ‘Changing Character of Hybrid Warfare’. explains how countries have adopted new methods and policies to achieve their national interest in the form of hybrid warfare. Hybrid Warfare is a form of unconventional warfare that is just below the threshold of open confrontation. This war is fought by proxy forces, cyber intrusions, transnational terrorist organizations, and economic and legal forums, but hybrid warfare has been occurring for an extremely long time. In this book Col. Shubhankar Das gives us a detailed analysis of hybrid warfare with recent case studies and also explains how global powers are exerting their influence and achieving national interests using Hybrid Warfare since the cold war. He explains the concept of hybrid warfare with the foundation of Kautilya and Sun Tzu, whose theories have laid the foundation of warfare in the international security arena, while simultaneously giving the reader the sense of how hybrid warfare and grey zone tactics work the author has not lost the sight of the big picture and challenges faced by India and its security establishment.

The author has started by giving a series of case studies to establish a pattern of hybrid warfare played by different countries and the accepting nature of hybrid warfare in western superpowers like the U.S.A and U.K, Furthermore, it amalgamated the studies with present-day challenges faced by India and what it should do to counter them.

While every country has its own capability of countering and performing hybrid warfare the core principle of conventional and non-conventional warfare has been taken from the theories of ancient Indian strategist Kautilya and Chinese General Sun Tzu. This book has shown in great detail the emergence of non-state actors and proxy forces disrupting the working of a whole national thread and redefining its identity through different facets of hybrid warfare; such as the rise of ISIS. The most relevant example of hybrid warfare practiced by any global power is that of Russia and its interference in the surrounding countries and incursions in Estonia, Crimea, Georgia, and Ukraine to name a few. While giving a step by step details of how Russia invaded Crimea through cyber-attacks, proxy forces, and media propaganda to change the national conversation. In many cases, it has been established that through disinformation and fake news riots have been started resulting in an internal disruption in the country resulting in the falling of the national government. This is how Russia advanced its national interest without actually going to war. Russia’s invasion of Crimea is one of the most bloodless invasions of all time. Now, this also establishes the evolution of warfare in the last 50 years.

Moreover, the book has mentioned the Israel-Hezbollah war of 2006 where one form of hybrid warfare that included guerilla tactics and brilliant use of media to turn the western world against Israel by showing the damage and suffering brought by the airstrikes of IDF because of inadequate intelligence. The media was the biggest weapon of Hezbollah in this asymmetrical war against Israel.

The rise of ISIS, a state within a state, their successful attempt in creating a caliphate garnered international attention and also attracted followers from all over the world. The noteworthy use of media and guerilla warfare tactics in Syria and Iraq led ISIS to capture more than 3,400 square miles along with the oil field.

Before the Western Alliance almost put the caliphate into the ground, ISIS had carried out terror attacks in Paris, Egypt, Turkey, and even in the United States. The rise and fall of ISIS provide an insightful view of using media as a weapon of disruption. By giving the case studies of every facet of hybrid warfare, the writer established a pattern and concluded with the challenges faced by India in the new world order and ways to counter them.

Today the biggest challenge India faces is from its neighbors, Pakistan, and China. Both the countries have fought multiple conflicts with India, but in the last 20 years, the nature of conflict has evolved from open confrontation to minimal disruptions in the daily life of citizens by fake news, terror attacks, constant cross-border intrusions, and baseless legal attacks in International forums. Pakistan has been supporting proxy forces in the Jammu and Kashmir region for more than 20 years, with diplomatic backing from Beijing. The rise of China into a global power has been the most notable success story of the 21st   century.

China has waged a form of asymmetrical warfare in the region. Chinese interference in the South China Sea, East China Sea, Tibet, and other neighbors have increased in the last 10 years in the form of small irritations in the sea, media, borders, and international forums. China’s economic might has been able to block most of the Indian neighbors into their debt trap diplomacy but in addition to that, China is also supporting Pakistan in the form of finance, military, and diplomatic aid, especially in United Nations by vetoing against India on numerous occasions. Chinese support to North-East rebel groups and indirect support to Pakistan, constant cross-border intrusions, and cyber-attacks on Indian defense networks has shown that China has come up as a bigger threat to India than Pakistan. This is obvious that China considers India a future threat if not contained now. To counter these multiple forms of attacks in 2018 Indian Army Land Warfare Doctrine recognized the need to protect and adapt to the new threat towards Indian sovereignty, while it provided the answers of what needs to be done it lacked the notion of how to be done.

This book can be put forth as an argument that the Indian security establishment needs a total overhaul and needs to adapt to the modern world using advanced infrastructure and total political backing. There is a need to establish a council with decision-making powers or give the national security council a more primary role than just an advisory board. Indian defense complex needs a private boost with government backing to overcome the security challenges & to establish India as an importer of defensive weapons rather than an exporter.  As India is getting more involved in international politics every day the need to have a substantial defense complex has never been more important.

Artificial Intelligence And The Future Of Power: 5 Battlegrounds

Options for the Northern Theater

Articles Col. Ali Ahmed (Retd.) - September 14, 2021
0
The Northern Command (NC) appears to have been left intact in the latest structural rejigging of the army, the most consequential since Independence. The...

Why Taliban’s Rise Should Worry India and its Neighbours

Articles Mohak Gambhir - September 9, 2021
0
Taliban’s rise to power in Afghanistan is perhaps the most important geopolitical development of recent times. What worries global community is the possibility of...