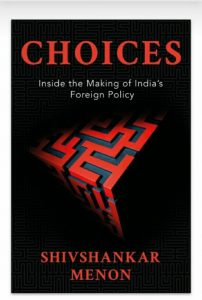 “Diplomats do not combine means with a view to ends like engineers; they take risks like gamblers” – Raymond Aron

The past two decades saw a significant transition in India’s global outlook as a rising power. Former National security advisor and Foreign Secretary Shivshankar Menon, with a distinguished diplomatic career, offers an insider’s view of India’s foreign policymaking in crucial times through this book. The book gives a clear and insightful view of five critical decisions taken by the government of India in the post-cold war era. Menon was directly involved in the decision-making process of all these instances.  Also, as a former envoy to Sri Lanka, Pakistan, and China, he makes a sensible analysis of incidences which was a turning point in India’s relations with these nations. The author has judiciously chosen the title as “Choices” as the book explores the reasons behind the nation opting for these particular choices and its long term consequences. Moreover, this book is a practitioner’s sincere description of circumstances and interests that led to these still debated decisions.

The book possesses Introduction and six chapters as contents. The five crucial decisions examined in Choices are as follows:

The recent developments in the Indo-China border make it worthwhile to analyze this earlier written chapter on the border agreement, which was the first of a kind between India and China. This agreement had delinked the boundary from the bilateral relations. The author discusses how this agreement has served its purpose, in accordance with the happenings in 2016. He also gives a glimpse of how china’s behavior is changing since the 2008-09 financial crisis, whereby it becomes more aggressive. Various lessons that can be drawn from the negotiation and implementation of this agreement is also discussed.

In the second chapter, the author throws light into the backstage of a vital turning point in Indo-US relations. The idea of the Civil nuclear initiative was initially welcomed with a lot of skeptical remarks citing the reliability of the US in such a crucial area. The author then gives a clear and detailed account of the choices made and the processes involved, like resolving differences regarding negotiations for Section 123 Agreement and obtaining the NSG clearance, which was described as the “hardest task.” He also appreciates the perseverance of Prime Minister Manmohan Singh, without which the deal may not have been successful- “Personalities matter,” he writes. It is argued that it was worth all this as the whole deal is not just about meeting India’s energy security; there is an indirect mention of the rise of China as a factor. He further gives a glimpse of how this initiative enhanced bilateral strategic and defense cooperation. India’s bold but careful approach is made clear as he states that the government had shown “the combination of Strategic boldness and tactical caution,” as in the case of other major issues.

The author, as the foreign secretary of India back in 2008, tries to answer a dilemma that many Indians hold in their mind. This chapter deals with the question of the utility of overt forces against Non-state actors with state support. The larger dilemma of not attacking is answered simply by stating, “more was to be gained from not attacking Pakistan than from attacking.” He then discusses the possible disadvantages if India had chosen to attack. His argument in support of PM’s decision not to attack is backed by stating India’s success in organizing the international community against Pakistan and is not responding in a way in which terrorists wanted. There is a brief mention of choices in India-Pak relations whereby the author argues that “ India today lacks the power to solve the problem”  as the roots of it are from Pakistan’s condition, and all it can do is to “manage” it. The Mumbai attack brings out the limitations of both forces and diplomacy in such situations. The author ends by stating that India will be responding differently to a similar situation in the future.

The book then discusses the widely debated topic of India’s involvement and options in the Sri Lankan Civil war. A brief background is given highlighting India’s concerns in the happenings, such as the issue of Tamil separatism. Amb Menon calls India’s intervention in the 1980s an “inexorable tragedy” but states India had very few options then. In 2009, the Priority of New Delhi was clearly to ensure the least civilian harm for political and moral reasons and also as the general elections were approaching. The author gives an insider’s view of the dilemma of very few policy options that India had in this case, citing that Indian policymakers felt that they did all they could. “ “Sri Lankan civil war is one of the few instances which I can think of where terrorism was successfully eradicated purely by military means,” the author also went to mention a combination of various factors other than the force which led to the fall of LTTE. He criticizes the Rajapksha administration’s Post-war reluctance to address Tamil grievances, which may lead to another separatist movement in the future. The Sri Lankan civil war is rightly pointed out as an example of the dilemmas of statecraft, and India had chosen Minimax foreign policy decisions- “ Minimizing the harm to one’s own interests and maximizing the gain.”

Menon starts by referring that India’s nuclear doctrine has the answer to this query. India considers its nuclear weapons to be primarily political tools rather than its use in warfighting. Simply stating, India had acquired nuclear weapons to prevent nuclear threats against it mainly as Pakistan and China became NWS in the 1990s. The author argues that these nuclear weapons have “ served their purpose” as  India hasn’t received a credible nuclear threat since 1998. India’s doctrine of credible minimum deterrence can be seen in the policy of assured retaliation combined with no first use. Menon also gives reasons for the paradox of India’s advocacy for a nuclear-free world as he states, “India is the only NWS that is a full-throated advocate of nuclear disarmament.” This choice by the nation is described as realistic and sensible.

In various instances, the author expresses concerns over the danger that the fragile states like Pakistan pose on the neighbors, pointing to the weak control over its nuclear weapons.

The author concludes with a chapter named the final word, in which he analyses his examination of these five choices. He backs the government’s decisions in all these cases by stating, “ There is no single correct or right answer to the questions foreign policy throws up, no answers that are valid in all circumstances.” The pioneer diplomat advises practitioners to be open to the possibilities and consequences of the choices. India’s predilections and strategic culture, which are revealed through its behavior at critical points, are also discussed.

Choices offer an unbiased and valuable first-hand record of some most controversial and critical events and decisions that contributed to the present global standing of the nation. This book is highly recommended for academicians and enthusiasts of India’s foreign policy and is indispensable for any Practitioners and aspiring diplomats. The book has fulfilled its purpose as it gives the readers a clear idea of processes involved in foreign policy decision making.

Menon raises the question of India’s journey to become a great power in the final part- discussing why India wants to be a great power and what that transformation requires. It is worth to end quoting Menon, where he is optimistic about India’s future stating,

“ Why am I sure that India will be a great power, despite all the limitations and frustrations that Indians express so vocally, eloquently and often?”

“ Because it is in India’s interest to be a great power.”

Book Review | China in the Indian Ocean – One Ocean, Many Strategies

Atmanirbharta in Defence: How has been the Journey So Far? Where are we Headed?