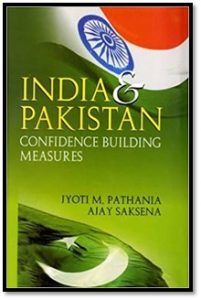 The Book is exhaustive reference material for scholars interested in Non-Official diplomacy, virtual diplomacy, informal and formal CBMs between India and Pakistan. Furthermore, the book also dwells on how CBMs have been used in mending the volatile Indo-Pak relations.

Indo- Pak Relations have been volatile since the time the two nations have existed. The history, pluralistic nature of the society, leadership and geography of the two nations has always been a major player when it comes to the relations. (This is more clearly discussed in the book from Pg.3-5). Neither nation is able to forgive the past and look ahead towards a more stable relationship. Both countries face immense asymmetry when it comes to the representation of interests and concentration of power, causing further problems in building stable relations. Most of the citizens, however, have now realized what war can do to each other and want to avoid it. Pakistan considered a failed state by most nations and India trying to gain regional powers, have both started putting their differences aside and working towards a more stable environment by gaining more and more confidence and trust in each other. The only way to do so is to have trust and mutually beneficial agreements along with mutually assured destruction.

However, it is easier said than done. Over the past 74 years both nations have done more harm than good to the relations by taking swings at each other left, right and centre. The need for trust and to back it with enough action to actually forgive and move on is indeed a long journey. One major way of starting this journey is by undertaking Confidence Building Measures (CBMs). CBMs are defined by the Defence Journal website as “Those steps or agreements on which the states agree with mutual benefit in mind, and states have faith that such agreement shall be obeyed by all the concerned. It could include diverse arrangements — such as hotlines, people-to-people exchanges, and prior notifications of military exercises — that can help reduce tensions and promote good neighbourly relations. These steps or agreements ultimately develop trust between the states and help in having peace and stability in the region.” Over the years, both nations have taken to the table, most issues. Others were resolved through war. This shows what each nation is capable of and what they are willing to put on the line for integrity and progress. This book looks at the various formal, informal and cultural CBMs undertaken till date. The first-ever need for such measures was felt when both nations became nuclear-capable and the leadership of both nations realized the destructive powers of a war which was most likely to go nuclear if relations were not mended.

Before talking about the Indo-Pak relations lets first look at why these measures are important and how can this book help us understand the previously taken measures in order to shape the future better. The impact Pakistan has on Indian policy is rather troubling. Pakistan is able to give refuge to radical elements form surroundings which in turn come back to India or join radical organisations within the state causing further damage to life as well as the already volatile relations. These radical groups are funded partly via narcotic trade and such rackets which by themselves are a huge problem to the society. We also see hybrid warfare in use via such entities against India. The CBMs can help both nations build more real relations and not fight over harmless issues ultimately hurting bilateral benefits. How both nations can build CBMs and what actually makes CBMs successful is talked about beautifully in the book on Pg. 58. There are various ‘understandings’ among the border patrols of the two nations. One of them was that neither forces were to attempt to capture or to attack the other via the Siachen route during winters. This was done to give a relaxer to both nation armies as the conditions on top of the glacier are inhabitable during those times. We saw a violation of the same when the Pakistan army infiltrated and built bunkers on the top.

This unfortunately wasn’t an isolated event and such events have been taking place in an extent which makes it harder for the two states to trust each other. Such informal memorandums of understandings (MOUs) by men and women facing each other each day at the ground is more fruitful as compared to the longer and wider compromises undertaken by the officials after months if not years of work and deliberations. This book gives an intricate and in-depth knowledge on what CBMs actually mean, different types, the various steps involved and numerous possibilities in real life through real world examples. The book takes into consideration all formal and informal talks, MOUs, and such data which already exists. The book even looks at the consequences of existing as well as perceived consequences of potential understandings, which give a much clearer and motivational factor to coming to the table instead of a battlefield.  In my view, understanding and accounting for the possible consequences of actions taken by actors in formal and informal capacities will massively change the discussion held behind locked doors which will, in turn, affect the entire dynamic of the geo-politics. India is looking for a permanent seat at the UN council and to achieve so we need to demonstrate the big brother capability along with the responsibility and accountability of one. Mending relations with Pakistan will be one of the greatest achievements in mending relationships with our neighbours and building long-lasting mutually beneficial partnerships. Economic, military, social and political growth are the four pillars of democracy and stability of a nation. A stable environment makes room and resources available for progress and development of self as well as allies. This book is an insight into the existing problems and possible future paths in front of us.

The already failing state of Pakistan which arguably has no concrete identity other than the Anti-India Idea behind which the leaders rally the citizens work mainly on foreign aid and thereby inviting foreign powers to mould its domestic and foreign policies. This need for keeping the coherence of the State is another huge obstacle which may be the end of Pakistan as we know it, if resolved. Thus, in my view, Pakistan has more to lose by making peace with India than it would stand to gain. However, a certain equilibrium may yet be possible via more realistic confidence of both nations. This can only be done by taking CBMs and backing them with concrete actions, unlike what we saw in the case with China in Galwan Valley where they promised to withdraw troops but didn’t actually do it till further pressure. You may be sceptical based on this review as to how CBMs could actually work in real life. The nuclear CBMs already existing between the two nations give up the ray of hope we need. Even though the use of nuclear weapons in war is not completely out of the question, but it gives us a good background of how future CBMs can be taken and similar MOUs be formed. This entire process is captured on Pg. 86-92 of the book.

The choice is ours, to be an educated public or a bystander, and reading this book will reflect what choices we make. The book covers all the aspects of how CBMs can be used by both, India and Pakistan to make this region peaceful, stable and progressive.

My Enemy’s Enemy: India in Afghanistan from the Soviet Invasion to the US Withdrawal by Avinash Paliwal