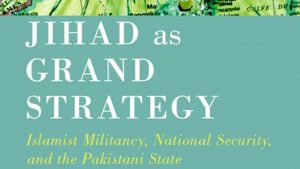 The book Jihad as Grand Strategy: Islamist Militancy, National Security and the Pakistani State elucidates Pakistan’s 74-years old strategy of using proxy militants and operationalising Islam to wage Jihad on India. The book consists of Seven Chapters that exclusively focuses on the Jihadist strategy of the Pakistani elite and its consequences for the state and the society and for the regional and international security orders.

The book starts with the introductory chapter where the author – S.Paul Kapur establishes Pakistan’s role in sponsoring terrorism to gain strategic advancement. He validates this argument by showing Pakistan’s direct or indirect role in all the major terrorist attacks in the Post-Cold War era. In this chapter the author elucidates the different aspects that have been taken into consideration by various researchers for studying Pakistan’s role in sponsoring terrorism and the limitations of conclusions drawn from it.

Kapur suggests that the research so far has been very limited in nature and left many questions unanswered. He points out that the existent literature either considers Pakistan’s terror sponsorship, a result of the insecurity which stems from the superior conventional capability of India or attributes it to the weak political foundation of Pakistan, where its leaders were short-sighted and driven by self-interest. The author accepts these arguments but states that it provides a narrow interpretation of proxy militant strategy. The writer sheds light on the strategic aspect of proxy militant strategy and the operationalization of Islam to wage Jihad on India. The author discusses the cost and benefits of this strategy. This chapter sets the foundation from where each issue pertaining to Pakistan’s proxy militant strategy is discussed comprehensively.

In the Second chapter – The Logic of a Militant Proxy Strategy, S.Paul Kapur begins by laying down the cost-benefit analysis of proxy militant strategy. These includes:

The author explains how Pakistan reaps the benefits of militant proxy strategy and how it goes well with Zulfiqar Ali Bhutto’s strategy of bleeding India through thousand cuts. The operationalization of Islam, which accentuates the anti-India narrative, acts like a binding force that unites the otherwise ethnically segregated Pakistani society. However, Pakistan faces a situation where some of the terrorist organizations have gone rogue and the radicalization of the society has led to sectarian violence. The author calls it Jihad Paradox. Thus, this chapter gives an overview of Pakistan’s sponsored Islamist Militancy.

In the Third chapter – Partition and an Emerging Strategy, the author describes the evolution of Pakistan’s proxy militant strategy since its creation and the first Kashmir war. Kapur states that the primary motivation for the adoption of such a strategy was to lessen the power configuration with respect to India. The Pakistani establishment was dissatisfied with the division of resources done during the partition and considered India as an existential threat. Pakistan wanted Kashmir as it would have provided access to the strategic locations and also because the region contained important water resources. Kashmir was a Muslim majority state, control over which would have enhanced the Islamic identity of Pakistan. The first Kashmir war happened in 1947. Pakistan used militants from the North-Western Frontier Province to trigger an armed revolt in Kashmir. They were defeated by Indian troops after the state was acceded to India by Raja Hari Singh. Pakistan strategic community learned the benefits of using proxies and also acknowledged the need for upgrading the proxy militant strategy. This laid the foundation for the next, more sophisticated attempt to capture Kashmir.

The Fourth chapter – Pakistan’s Militant Strategy Evolves, is based on the upgrading of the militant proxy strategy by Pakistan. The author explains these advancements by comprehensively studying the 1965 Kashmir War, The 1971 Liberation War and The Afghan War. The 1965 warsaw Pakistan using well-trained and more religiously motivated guerrillas. Kapur states that it was because of political miscalculation that Pakistan lost to India. The 1971 war was the first war where Pakistan used its conventional forces. The humiliating defeat and the creation of Bangladesh convinced Pakistan’s establishments that it will not be able to defeat India using conventional methods. Thereafter, the proxy militant strategy became an integral part of Pakistan’s strategy. The Afghan war was treated as an opportunity by Pakistan. A major part of financial aid and resources were channelised to fuel the war against India.

In the Fifth chapter – Kashmir and Afghanistan Reprise, S.Paul Kapur talks about the role of the 1987 state elections in Jammu & Kashmir, in creating an anti-India sentiment within the state. Pakistan used this opportunity and funnelled its resources to support and maintain the Kashmir insurgency. Pakistan was successful in exploiting India’s resources and in creating a negative image of India on global platforms. Pakistan lent its support to the Taliban in Afghanistan. This helped in creating a friendly regime in its western borders and it also helped Pakistan in recruiting Mujahideen to fight against India.

The Sixth chapter – Jihad as Grand Strategy, discusses the strategic achievement and the collateral damage Pakistan has incurred while pursuing the proxy militant strategy. Contrary to many scholars, the author suggests that Pakistan has gained significantly. The strategy has helped in creating a unified front against India, it has challenged India in Kashmir and has drained a significant amount of India’s resources. It has partially helped in closing the power configuration and has helped in maintaining a favourable geopolitical environment in its western border. The author also lays down the repercussion of the same strategy. The dilution of control over the terror outfits results in such outfits becoming rogue. The Tehreek-i-Taliban Pakistan (TTP) is predominantly anti-establishment and is responsible for many terrorist attacks in Pakistan. The author calls it the principal-agent problem. It has created a negative global image of Pakistan. It creates a threat to global security as both Pakistan and India are nuclear-powered nations. The increased radicalization has caused sectarian violence.

The Seventh chapter – The Future: can Pakistan abandon Jihad? takes a prescriptive turn. The author is of the view that the cost of proxy militant strategy has outweighed the benefits, in Pakistan’s case. The principal-agent problem, the Jihad Paradox has all contributed to it. Kapur suggests that the only way Pakistan can ensure its existence is by giving up the strategy and not allowing terrorist organizations in its territory. According to him, this can only be done by shedding the hatred against India and transforming its purpose and national identity.

The author – S.Paul Kapur is a professor in the Department of National Security Affairs at the US Naval Postgraduate School. His areas of expertise include nuclear proliferation, South Asian politics and security. The book has been successful in explaining the connection between Pakistan and Islamist militancy and the strategic role it has played against a conventionally superior adversary. The book has explained the logic behind such a strategy in an unbiased manner and in the same manner, it has explained the repercussions of the same.

Book Review | China in the Indian Ocean – One Ocean, Many Strategies