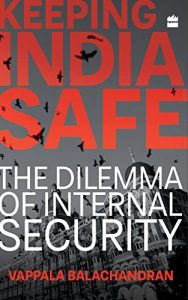 The India Police force whose sole purpose was to make sure that law and order of the state are maintained and heinous crimes are taken care of however it is shameful to see how Police forces are overburdened with works like celebrity protection, investigating petty criminals, etc. The essence of police is reducing in India and due to the fragmented Indian system, it is becoming tough day by day for the overstretched police force to take care of the internal security.

In this book, the author tries to bring out the important and historical aspects of the current failure in the internal security arena. Despite India’s diversity and cultural amalgamation why did still India suffer a wave of insurgencies, terrorism, and riots?  Is it due to the inefficiency of the police force to prevent it? Or is it due to the lack of Centrally guided architecture? These are a few important questions that the author tried to answer throughout the book with supporting pieces of evidence.

The book began with addressing the important aspect of Indian identity, which is the idea of multiculturalism. Despite the multicultural aspect of India, Social inequality persisted for a long and that is something which always creates an issue between different sections of people. The author here addresses the first important problem of the Indian Police force that is the fragmented nature without any central control, he satirically mentioned that “It is like going to war under twenty- nine independent generals”. Due to this fragmented nature of the Indian police force during a time of riot and crisis, it is always the army that is being called upon. Throughout the first chapter, he covered the important incidents that India faced exactly after the partition that bought the importance of having centralized armed police he also mentioned about the creation of different paramilitary units in India. The part also covered the emergence of Partition riots, Naga insurgency, Telangana revolt, and communal riots.

The making of the constitution was always seen as an element of success in the history of India however it was never noticed how our constitution drafting committee missed the importance of internal security. The second section of the book mostly deals with the historical aspect of constitution-making and focused more on addressing the important acts or agreements that later used in the internal security arena. The act of 1935 has been given a very important focus in this chapter and book. The chapter also dealt with the important issue of a tussle between the Congress and Muslim league which lead to many important events in Indian history especially related to internal security. The chapter also spoke about the debate between having a Gandhian model of Decentralized plan or having a Federal parliamentary form.

The overburden police force that is fragmented into twenty-nine states is the fundamental point in the book and not only this the book covers the important issue of how the police are being perceived by the government. In India unlike foreign countries the entire burden is put upon the state police that kind of overstretched the work of the police force due to the large strength of police force it is becoming hard to manage them unlike in the USA where the crimes and policing responsibility is shared with other policing systems like Transport police, park police, university police, etc. that is not the case with Indian police another issue is the lack of trust between the state police and intelligence that kind of put the police force into an off guard position as we saw it in the case of 26/11 were multiple alerts were presented to the state police.

Chapter 4 covers a very interesting story of a British officer who probably had effected the Indian Police function to a large extent it is the story of famous Thug hunter William Henry Sleeman. Who through his unique method able to eliminate the issue of a thug from India, the beauty of his work was how he created the whole idea of having a centralized database so that the movement of the thugs can be track down not only this it was Sleeman who initiated the idea of having a centralized prosecution mechanism. Sleeman’s example kind of raises an important question of why India needs a centralized police force with all India jurisdiction.

The Chapter ‘The Emergency’ deals with a lot of important aspects of Internal security in India. The chapter does not only deals with the political issue rather author tries to focus on the Non -traditional security Issue behind the emergency as during those times India was going through a refugee crisis, internal migrations, food shortage, etc. Which lead to many labor agitation and protests in India.

India’s Internal security analysis will remain incomplete without discussing the issue of 26/11. The attack highlighted a lot of drawbacks in Indian Internal security policies and the arena. The sixth chapter of the book highlights the Intelligence warnings provided to the Maharashtra government and how they reacted to that information.

The chapter addresses the negligence on the part of the government as well as the overconfidence of the Police on coastal surveillance. The chapter also covers how India neglected similar incidents in the neighboring countries and also put a big question mark on the Hotel security in India especially Five start hotels. The chapter addresses the failure of coastal Services in India as well The chapter gives a brief idea about the 26/11 committee and the issue they faced during the report preparation.

In the last part of the book, the author tries to answer the fundamental question of how India can solve the internal security issue. The author took a few examples from the foreign agencies in dealing with terrorism and appeal that India should also follow the same pattern for better results. The author also suggested the idea of developing a proper private and government coordination in the security aspect. He also emphasizes having independent Think tanks so that more proper research can be done on the issue and in the last part he again tries to focus on the same fundamental point of reducing the burden of the Indian police force for better functioning.

Author Vappala Balachandran was a former IPS officer who served during the worse situation. He was part of the 26/11 committee and he served in both as a police officer and also under the government of India, that’s why this book kind of become a great read for those who want to understand the reason behind India’s failure in curbing terrorism and insurgency.

The tone of the book is simple any reader who is a newbie and wants to know more about the origin of Indian internal security issues is the book for them. The author used simple wordings, an ample number of examples, and statistics for better understanding.

Overall the book is very informative especially for those who are working on internal security as the author has covered a wide range of topics from Constitution-making to lesson learned after 26/11 also author had done a commendable job in linking the recent events with the past and also applause for bringing his own experience into the limelight which makes this work more authentic and readable.

Book Review | Indian National Security and Counter-Insurgency: The use of Force Vs Non-Violent Response