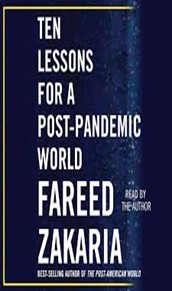 About the author: Fareed Zakaria is an Indian-American journalist, political commentator, and author. He is the host of CNN’S Fareed Zakaria and writes a weekly paid column for the Washington Post. He graduated with a Bachelor of Arts from Yale University in 1986. He later gained a Ph.D. in government from Harvard University in 1993.

This book gives us a snapshot of where we are at the moment. Each of the chapters has seamlessly woven in some of the very pertinent issues of our times.

This book is not essentially about the pandemic but how the world is coming into being as a result of the pandemic and also our responses to it.

The book begins with the fact that pandemics are nothing new to mankind; rather the Western Literature begins with one- plagues. In his book, the History of the Pennolepsian War, Thucydides writes, ‘a terrible plague swept through Athens, killing vast numbers of able-bodied citizens…’ Plagues often have consequences. For example, in the 1300s it was the bubonic plague that prompted an intellectual revolution- the Renaissance, Enlightenment, and Reformation.

The book is about the “post-pandemic” world not because the pandemic is over but because we have crossed a crucial stage in human history yet again, from which we have gathered several experience and knowledge which could be used in a new era- which might not be completely free of outbreaks or diseases because of the constant development and modernization which leads humans to encroach upon the space of animals. These technologically sophisticated economies are thereby turning into a perfect cauldron for the animal to human viral transfers. It is high time that we recognize these vulnerabilities and tries our level best to mitigate these – by regulating wet markets, outlawing the sale of exotic animals like of bats, civets and finally develop an efficient global health system.

While discussing a need for upgrading our health system what lies at the core is good governance and faith on expert knowledge or science. In this time of the crisis what mattered the most was how competent the government of a country, irrespective of its political ideologies, was able to control the virus. Both left-of-center (South Korea, New Zealand, Taiwan) and right of center government (Germany, Austria, Australia) did quite well in handling it. Only those countries with fiery populists who were laid back failed this pandemic. They completely disregarded the expert knowledge or advice and thought these ‘meritocrats’- a new ruling class are trying to dominate them. Good governance is all about giving officials and experts discretion, autonomy, and the ability to exercise their own judgment because they have gathered intense knowledge over the years through rigorous research, studies and practice in the field. Another significant point that comes up at this juncture is that we need to understand that with the world getting complicated we will more often need expert advice- who in fact is a sort of elite inevitably. But the relationship between elites and the people should be mutual. Both need to understand and connect to each other rather than the elite ‘meritocrats’ just feeling superior to the rest because of the knowledge they possess that gives them power or leverage over others. It needs to be a two-way street.

The covid pandemic has invariably widened the class gap. The rise of the digital world in the last two decades has proven to be beneficial for those who have the luxury of work from home(WFH) at the moment, unlike lower-income families. This has resulted in a class resentment at the moment which can no longer be ignored. Even though work from home seems to be a fantastic option at the moment, in reality, it might actually result in the gradual decay of productivity and innovations because at the end of the day we are social animals who crave human contact and it is this human contact with our colleagues and peers which is at the heart of learning and creativity. However, there is also a positive side as pointed out by the author previously that pandemics essentially bring changes- covid just might have revolutionized our work/jobs. The previous model of a 20th-century factory is coming to an end and our work is becoming more closely tied to home life. Future is taking us back to the olden days.

In this way, throughout the book, Zakaria has presented several choices that are available to us in this world where nothing is given or written as such. We need to make and break existing trends to meet our ends at a given point in time. However, here we need to act decisively, we could either settle into a world of slow growth, increasing natural dangers or inequality or act strategically using the entire capacity of the government to equip people with skills and security in the age of bewildering changes.