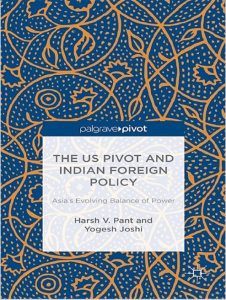 The premise of the book titled “The US Pivot and the Indian Foreign Policy” is centered around the rise of China as a challenger to the United States and the relative decline of the latter in terms of its global dominance. Under this backdrop, the authors have tried to study the pivot of the United States to the Asian theatre and the subsequent hedging strategy adopted by India against China as a result of this pivot. The pivot, according to the authors, happened in 2011 when the then POTUS Barack Obama announced the strategy. As both United States and India were faced with the exponential rise of China, the US under Obama took this pivot, while India undertook a three-pronged approach that was basically a hedging strategy against China in the region.

“Transition of power in international politics often leads to conflict and confrontation between the existing hegemon and the rising challenger.” (p.2)

The first major argument that the authors have presented is the ‘transition of power’ that is taking place as a result of declining US influence and at the same time, the rising influence of China. According to the authors, this transition of power will lead to confrontations between the two, and thus, will have an impact on the geopolitics of the world. Under this backdrop, the authors have further tried to study the Indian Foreign Policy, especially with the US announcing a pivot towards Asia and declaring India to be a strategic partner in the same. They consider India as a ‘middle power’ that according to them, can play a role in balancing China in the region. As a result of this, the authors have made an attempt to analyze the foreign policy options India has under these circumstances and at the same time, analyze the previous and existing foreign policy frameworks in this regard. According to them, this pivot provides India with a host of opportunities, but simultaneously also poses various challenges. The book also identifies the creation of so-called alliances with the US and India on one side and China and Pakistan on the other. While the US is accepting of India’s rise in the global arena, China has been wary of India in the region. In this context, the authors have stated that India needs a decisive foreign policy that permeates through the strategic challenges posed to it.

This brings us to the second major argument that the authors have tried to make in the book. They state that post the US pivot towards Asia, India had the option of endorsing it and forge deeper cooperation with the United States. However, India adopted a hedging strategy in three different realms, namely- recalibrating ties with Washington, normalizing ties with China, and forging partnerships with regional powers. In this particular regard, the authors feel that a hedging strategy might not be the correct geopolitical move for India, given the strategic challenges that such a move posits. They believe that in trying to maintain strategic relations with Washington and normalizing relations with Beijing, New Delhi can’t expect unconditional support of the former. Since India has undertaken external balancing as a tactic against China, it will need the United States to support it fully in its endeavors, according to the authors.

With this dilemma, the authors then have tried to compare the foreign policy undertaken by the UPA government and the NDA government. They state that the UPA government followed a hedging strategy based on the policy of non-alignment, which, according to them, has not proved useful. The book asserts that “under the UPA government, Indian foreign policy towards the ‘pivot’ was punctuated by reluctance and caution”. (p. 45). As a result of this, the relationship between the United States and India reached an impasse during the end of the UPA government’s second term. However, the authors feel that the NDA government reversed this policy of caution and took up more active engagement with Washington, especially with regards to the US pivot towards Asia. This, according to them, allowed India to take note of common convergences between the two nations, especially on the matters like China’s rise, maritime security, and freedom of navigation, and also allowed them to deepen their strategic partnership in areas like defence. The authors endorse this policy while stating that it is also in line with India’s Act East Policy. However, they also state that India’s aggressive stand against China has been more rhetorical, rather than action-oriented.

I personally concur with the thoughts and arguments of the authors in the sense that India needs a decisive strategy in dealing with China in the region, and hence, should seize the opportunities available to us because of the US pivot towards the region and their view of India as a rising middle power. However, there is a point of concern that I would like to voice here. The authors have rightly pointed out that even though India needs to normalize relations with Beijing, it should do so from a ‘position of strength’. While I completely agree with this notion, I also believe that India requires a stronger ‘threat perception’ in dealing effectively with China. Being wary and alert about China’s intentions and ambitions in the region is something that India needs to constantly look at in order to devise a coherent, long-term strategy that is in line with the NDA government’s three-pronged approach. It would be worthy to note a particular excerpt from the authors in this book which states:

“The Indian leadership has been able to articulate to Beijing the fundamental problem which besets China’s worldview: its urge for expansionism.” (p.75)

Borrowing from this particular thought, I also concur with the authors that being just rhetorical in dealing with China will not do the trick. Active pursuance of our foreign policy goals with action-oriented work is the way to go.