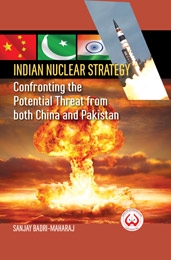 Twenty years after the 1998 nuclear tests and the publication of India’s Nuclear Doctrine, India has continued to face endemic security challenges from both China and Pakistan. The latter, through the apparent induction of tactical nuclear weapons into the equation and a rapid expansion of its fissile material production capacity has introduced an additional complication into Indian security calculations while China has become increasingly assertive and intransigent in its conduct towards its neighbors.
India’s nuclear strategy, facing a changing landscape, has shown some degree of flexibility though this has not been adequately articulated. Furthermore, discussion of India’s nuclear strategy, such that it is, has been somewhat one-dimensional with an excessive and, it is argued, an unnecessary debate over the stated Indian policy of no-first-use.
This book examines India’s nuclear strategy as it confronts the potential threat from both China and Pakistan. The potential threats – traditional as well as non-traditional CBRN threats – will be examined as will India’s approach to dealing with them. India’s nuclear arsenal, its dual purpose civil-military space program and its nascent BMD capability will be explored with a view to informing the reader as to the steps taken by India to confront its nuclear challenges. In addition, the Indian nuclear doctrine and the strategy evolved therefrom is examined to demonstrate the flexibility inherent in the Indian nuclear doctrine while also highlighting certain areas that require attention.
By adopting an excessively secretive approach, India has failed to articulate its approach to nuclear strategy. It is perhaps time that India reconsiders this approach and facilitates a more public and forthright discussion of its nuclear strategy in light of evolving nuclear threats while simultaneously continuing to develop its capabilities so as to deter any potential conflict.
Price Rs.980