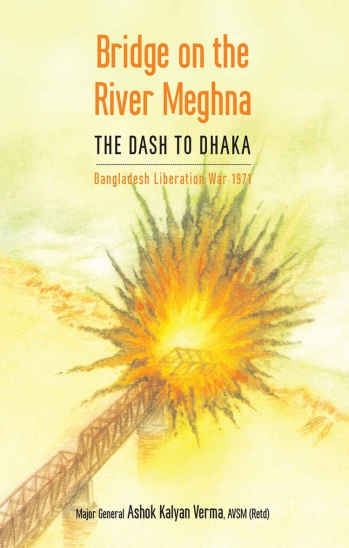 Akhaura was an important Pakistani Battalion size strong point located in the close proximity of Agartala, the capital of Tripura state in Eastern India. The Meghna River made the Eastern sector in East Bengal very difficult to operate through, owing to large water bodies and marshes. In fact, operating from Tripura, Lt Gen Sagat Singh’s 4 Corp’s plans were to liberate maximum territory east of the Meghna in the Liberation War in 1971. The possibility of getting to Dhaka across the broad expanse of the marshy terrain and the mighty Meghna, seemed too far-fetched, but when it quite suddenly happened to come about, it led to the stunning victory in the war.

It began with the very convincing success of 57 Mountain Division in the capture of Akhaura. It was a set-piece attack against a Pakistani battalion size strong point. This led to a sudden change in the direct thrust to the Meghna being adopted, using the railway line on an embankment as its axis of advance. A quite unprepared 57 division, with just two infantry brigades and no worthwhile bridging resources to overcome blown bridges, made bold to go for the Bridge on the River Meghna, leading to the most dramatic success story of the 1971 War. Gen Sagat seized the opportunity by employing helicopters to bypass Pakistani opposition and to dash to Dhaka–the ‘Centre of Gravity’ in the War. It was a stunning victory. In contrast, the Pakistani higher leadership failed to protect Dhaka in the war. Indian and Mukti Bahani innovations led to a convincing success. The general population of Bangladesh and Dhaka, in particular, contributed most significantly to the stunning success.

This account has been written 37 years after the Liberation War, following a visit by Indian Veterans to Bangladesh in March 2008. Authenticity in battle narrations is difficult, but in this book, we have the step by step narration of the action of the opposite side, obtained from the energy brigade commander’s book East Pakistan to Bangladesh–Brig Sadullah Khan’s narration of the same events as seen by him, which adds a unique flavour to the story.