A central, persistent theme in the South Asian region has been India and Pakistan rivalry.  Their relations by and large have always been a minefield of mutual discriminations, communal antagonism, and military confrontation. COVID-19 times can embolden the threats between the two nuclear neighbors. It will be worthwhile to examine what threats and challenges Pakistan can pose during the Pandemic hour.

In the Pandemic times when the efforts & capabilities of almost all nations of the world is directed towards finding a suitable response mechanism for their suffering citizens, Pakistan continues to maintain or rather increase its espionage, spy, and surveillance activities in India. On Sunday, the 28th of May, India declared two officials of the Pakistan High Commission as “Persona non grata” on charges of espionage and ordered them to leave the country within 24 hours, the ministry of external affairs said. The two officials, Abid Hussain and Muhammad Tahir were caught by Delhi Police, and other security agencies, while they were obtaining sensitive documents relating to India’s security from an Indian National in exchange for money, and this included detailed tracing of army movement via trains.[1]

To avenge the death of the Hizbul top commander Riyaz Naikoo; large-scale terror strikes across the valley have been planned; its main targets would not just be the security forces deployed in the valley at various places, but to carry out arms robberies; mobilise innocent youth amid encounter/curfew and COVID; exploit local youth as cannon fodder for the selfish purpose; using stone – pelters as a human shield while carrying out terror activities; and also a possibility of managed hostage situation cannot be ruled out.[2] A major Pulwama-like incident was averted by the timely intervention of the security forces, who recovered vehicles carrying Improvised Explosive Device (IED)in South Kashmir’s Pulwama district. The vehicles were carrying over 45-50 Kg of explosives, JeM role is suspected in this incident.[3]

Infiltration attempts will increase at the border. A pigeon suspected to be trained for spying and having a ring with alphabets and numbers written on it was captured near the India-Pakistan international border in Kathua district of Jammu. [4] Some reports point to targeting the Jammu region as well by using the road along the International Border between the two countries. On the basis of the intel inputs, the government has asked the Border Security Force (BSF) to step up security and keep a strict vigil along the border area.[5]

These incidents have happened in a matter of the past few months and do not appear to be merely by chance. In fact, they seem to be planned calibrated moves orchestrated by the deep state. Why does Pakistan do this? One reason may be to distract the attention of its own people from the lack of good governance in the domestic front coupled with mishandling of the coronavirus crisis, and secondly, to unite the people under the garb of nationalist fervor, especially their disgruntled Awaam, by upping the ante against India.

Use of the Virus as a Weapon

Though it is in the realm of speculation, there are chances that Pakistan can use infected asymptomatic patients to infiltrate the border and infect Indian citizens, with the aim of spreading the disease and overwhelming the state so much that it is unable to cope up, hence creating a sort of health emergency. This may not just be limited to J&K and can pose to be a viable threat all along the Western borders. The Pakistan Army is also moving coronavirus infected patients from Punjab province to Pakistan Occupied Jammu Kashmir (PoJK) and Gilgit Baltistan, the marginalised areas under the Pakistan occupation endangering the lives of indigenous Kashmiris. [6]

With the increase in the jobless migrant workers and unemployment, there is a strong likelihood for these people to be recruited by inimical forces for creating unrest in India. Pakistan may well attempt to utilise such an opportunity and instigate the rise of social unrest, looting, vandalism, radicalising the unemployed youth, thereby creating communal disharmony as well as Law and order situation. This may lead to further clashes and contacts between the security forces and the migrant workers/laborers leading to the flouting of social distancing norms, hence spiking the coronavirus cases.

Use of Religion for propaganda and fake news

Pakistan is and will continue influencing the Indian Muslims to violate the COVID-19 lockdown says the Delhi Police. As per them, a deliberate disinformation campaign is being run by Pakistan to instigate Indian Muslims to violate the nationwide lockdown announced by the Govt. Pakistan’s social media handles had spread fake news among Muslims India during the riots in Northeast Delhi in February end.  A similar campaign is being carried out now to disrupt the lockdown. Several videos circulated on social media appear to be shot in Pakistan and the Middle East but audio in Hindi has been superimposed to create a Hindi video.[7]

Many fake Arab handles slamming India are part of the Twitter War from Pakistan, these handles are posing as Arab Royalty and criticising “Islamophobia” in India. Social media witnessed a sudden increase in the numbers of Pakistani accounts. The print reported that account @sayyidaMona, which appeared to belong to Omani princess Mona bint Fahad al-Said, was allegedly being operated by Pakistani users. This account posted a tweet that the Indian government should stop prosecuting Muslim brothers in India and it went viral for its anti-India stance. The tweet is shown below: 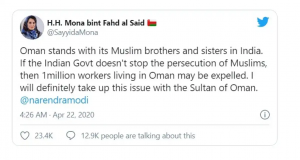 The real princess issued a clarification on 22nd April about the viral tweet not being posted by her. The Indian Ambassador to Oman acknowledged and thanked the princess the same day with the following tweet as shown below:

Twitter has finally suspended the fake Pakistani Inter-Services Intelligence (ISI) handle account of @idanialusaf,  impersonating Princess Mona bint Faisal, by creating a fake ID named @NouraAlSaud and was involved in anti-India propaganda. This twitter handle initially went by the name ‘pak__fauj’ and only changed it to sound more authentic and Arabic. [8]

Another Pakistan Social Media campaigner Hanzala Tayyab leads about 300 ultra-nationalist cyber warriors fighting an internet war with arch-foe India, in a battle that is increasingly sucking global giants such as Twitter and Facebook., he has more than 50,000 followers. This online battle of political and ideological narratives i.e. the fifth – generation warfare is the one that Pakistan military believes it must win at all costs.[9]

Videos of Muslims refusing to get tested and beating medical personnel are also being spread with the request to do the same and inspire other Muslim brothers, this fake news is watched by millions of users and end up influencing a larger section of people. Moreover, these are further shared on other platforms like WhatsApp, Twitter, and Facebook. Several original up-loaders are deleting their accounts after the videos are uploaded suggesting deliberate disinformation propaganda campaigns.[10]

A complete lack of governance and increasing suffering under the pandemic conditions will only lead to handing over the entire country to the Pakistan Army and strengthening the grip of the deep state. In another report titled “Is Pakistan heading for another Dictatorship”, the introductory paragraph says it all. “Pakistan takes solace in dictatorship every decade or so since it came into existence and the last dictatorship of Gen. Parvez Musharaf ended in 2008. Since then Pakistan has been fighting for its democracy to survive. But today the atmosphere doesn’t look good at all. All the indicators are in favor of an upcoming dictatorship. Gen Qamar Javed Bajwa stands at the crossroads today where he is haunted by General Ayub Khan’s dilemma of October 1958. His solutions to problems could generate more issues, and his allies may turn into his critics and his critics into hostile opponents. So will he take things in his own hands before any disgruntled general decides to undertake the route of Maj. Gen Akbar Khan of Rawalpindi Conspiracy(1951), or Maj. Gen. Tajammul Hussain Malik’s conspiracy to assassinate Zia-ul-Haq (1980), or Maj.Gen. Zahirul Islam Abbasi’s coup attempt against the government of Benazir Bhutto (1995).[11]

Gen Bajwa’s extension ends in the year 2022, along with  Iman Khan’s rule of “Uniform-ed Democracy[12]. And using the Pandemic crisis as an opportunity he has started tightening his grip. Will this crisis act as a trigger to reinstate the fifth dictator of Pakistan?

While the current crisis calls for all nations to come together and fight this menace together, however the deep-rooted desire of the radical and fundamental forces in Pakistan to harm the Indian state may well lead to the probable threats and challenges discussed above to become a reality. Considering the aforesaid, it is pertinent that Indian policymakers take cognisance of risks and perils that Pakistan may pose during the COVID-19 times.