On 30th March 2022, the Assam- Meghalaya signed a pact to resolve a five-decade inter-state border dispute.[1] The negotiation to resolve the dispute started in July last year, resulting in a joint recommendation by both states to resolve the issue peacefully.[2] With the pact, six out of 12 disputed areas -Hahim, Gizang, Tarabari, Boklapara, Khanapara-Pilingkata, Ratacherra-have been settled between the states through peaceful negotiation (See Fig 01). The committee adopted the ‘five-phase approach’ [3] to resolve the dispute, which involved exchanging records, joint field visits, detailed deliberation, and negotiation before making a final recommendation. Point here to mention that there have been several rounds of border negotiation since the formation of the Meghalaya state, concluding in maintaining the status quo.[4] 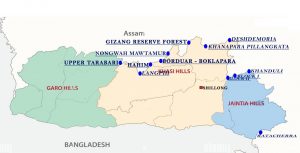 The signed pact between the states holds immense importance for the northeastern states and has given a ray of hope for future resolution of complex issues, especially after the violent clash between Assam-Mizoram personnel over an unresolved border point in Lilapur in the Cachar district of Assam last year. [5] Over the last decade, the Northeastern states have done progressively well in all aspects, may it be reducing insurgency incidents, developing connectivity infrastructure, or evolving as a fulcrum to India’s Act East Policy. Therefore, peaceful resolution of the border dispute, which is an emerging challenge in the region, holds immense importance for a peaceful and prosperous northeastern state. 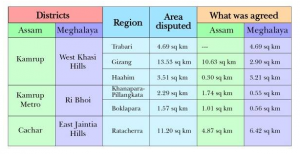 The signed agreement is a welcoming step as it involves a give-and-take approach by both the states and sets the stage for future resolution of the other complex border disputes in the region. However, the said approach can work to resolve minor border disputes, but for more complex issues, this can lead to apprehension and alienation among the people on both sides. Many stakeholders have opposed this approach [6], claiming that they are not involved in the negotiation process. Also, people are not willing to be part of a state where they will be treated as a minority.[7] In the current pact, many areas which were earlier under Assam will now fall under the jurisdiction of Meghalaya and visa-versa (Fig – 02). Thus, following this approach without the proper rehabilitation policy will create more problems in the near future. People residing, cultivating and occupying land along the border need a solution according to their will, which is hardly the outcome of such an approach.

Therefore, the remaining six disputes between both states demand a holistic approach for long-lasting resolution and imparting peace. Currently, Assam is having border disputes with Arunachal Pradesh, Nagaland, Mizoram and Meghalaya. Therefore, resolving other complex issues, including six remaining border points in the Assam-Meghalaya border dispute, requires a more proactive and beyond the give-and-take approach.

These proactive and out of the box approaches must hold the four vital points. First, a committee formed to resolve the issue must include the locals i.e., sons and daughters of the land. It is often found, especially in northeastern states, that locals are rarely included in the resolution process resulting in protest, delaying and even revocation of the pact signed. Therefore, involvement of local stakeholders is key to successful resolutions that include various civil service organizations (CSOs), traditional heads, goan buras, landowners, student unions and village headman.

Second, the resolution of the issue must not be seen through the lens of win-or-loss. The northeastern states have complex ethnic diversity and century-old rivalry, competition for resources and some time for pride between the different tribes or ethnic groups cannot be undone overnight. Therefore, the best way is to impart education, infuse development, increase people-to-people contact and advertise the merit of the shared goal and development in the hearts and minds of the people. However, Sir Gerald Templar used the winning ‘heart and mind’ approach in the Malayan Emergency (1948- 1960) [8] as a counter-insurgency method while dealing with insurgency passively, but it can also be helpful in other aspects of dispute resolution.

Third, the resolution must hold a certain timeline as it imparts accountability to the stakeholders. Otherwise, the people with vested interest used the status quo as an opportunity to exploit the common people. Such stances are quite prevalent in the northeastern state due to the presence of a large number of insurgent groups. Fourth, the resettlement and rehabilitation policy must be robust and people friendly. Settlement of border disputes at times involves the rehabilitation of the people across the border. In such a situation, people’s will must be given utmost priority with all the resources available.

Resolving a long-standing border dispute is a must for a peaceful and prosperous northeastern state. Also, being a fulcrum of India’s Act East Policy, the northeastern state holds immense potential for tourism, agriculture, sports, etc. Therefore, the time is now to harness the true potential of northeastern youth and increase northeastern contribution to national GDP to 10 percent by 2030. Therefore, resolving pending issues, border disputes and insurgency is a prerequisite and while resolving those issues, the needs and aspirations of the local people must be paramount.