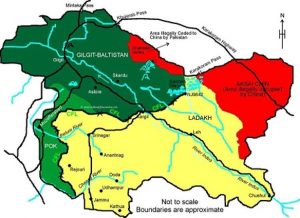 China-Pakistan Economic Corridor (CPEC) is the flagship project of One Belt One Road (OBOR), connecting Kashgar in China’s Xinjiang Province with Gwadar Port in Pakistan.  The projects under CPEC are of four types – Energy Projects, Infrastructure Projects, Gawadar related Projects and Industrial Cooperation. It has been estimated that besides creating two million new employment opportunities, Pakistan would benefit with at least two percent increase in its GDP per annum, and develop a wider regional connectivity.  Much has been written about CPEC, the immense effect that it will have on the debt burden on Pakistan, though in Pakistan it is brandied as a ‘game changer’.

Two parts of POJK, Gilgit-Baltistan (GB) and Pakistan Occupied Kashmir (POK) are integral to CPEC.  It is necessary to examine the effect CPEC will have on POJK, which is legally Indian territory, and any change has immense effect on India.

In the POJK, on the infrastructural front, is the National Highway 35 (N35) that passes through GB.  More than 400 kilometres of the CPEC route passes through GB, starting near the China border in Sust Dry Port to the Basha area at the periphery of the boundary with the Khyber Pakhtunkhwa (KP) province. The plan is to reconstruct and upgrade works which forms the Pakistani portion of the Karakoram Highway (KKH). The KKH spans 887km between the China-Pakistan border and the town of Burhan, near Hasan Abdal, through GB.  The 175 kilometre road between Gilgit and Skardu will be simultaneously upgraded to a 4-lane road at a cost of $475 million to provide direct access to Skardu from the N-35. Construction is expected to be completed at a cost of approximately $1.26 billion with 90% of funding to come from China’s EXIM bank in the form of low interest rate concessional loans.

POK is a narrow strip lacking intra-district connectivity. POK and GB are also not interconnected through a road network and exist as separate entities. In the absence of any viable land route, the people of the southern districts of Mirpur, Bhimber and Kotli, have to travel to Muzaffarabad via Islamabad, which is both expensive and time consuming. In the POK, 200km long Mansehra-Muzaffarabad-Mirpur-Mangla Expressway (named as M4) plans to connect Muzaffarabad, the capital of POK, with the Grand Trunk (GT) Road through Mangla and Mirpur.  This is expected to open the tourist potential of Jhelum-Neelum Valley, which incidentally received more than half a million tourists in 2018.  It addition to the natural beauty, Neelum Valley has Sharda Peeth which is one of the eighteen Maha Shakti Peethas and Sharda Buddhist University – an ancient centre of learning dedicated to the Goddess of learning Sharada.

A long term project under CPEC involves construction of the 682km long Khunjerab Railway line between of Havelian and Khunjerab Pass, with extension to China’s Lanxin Railway (Southern Xinjiang Railway) in Kashgar, Xinjiang. This railway will roughly parallel to KKH, and is expected to be completed by 2030.

Between Thakot and Raikot plans are underway to construct several hydropower projects, most notably the Diamer-Bhasha Dam and Dasu Dam. Sections of the N-35 around these projects will be completely rebuilt in tandem with dam construction.  A series of energy projects are being planned in POJK. It is home to two big power projects – Mangla and Neelum-Jhelum, which together produce over 2,000MW of electricity.   The Kohala Hydropower Project on the Jhelum River, upstream of Domel has been planned as a run-of-the river project with a total installed capacity of 1,124MW and an estimated cost of $2.5 billion. Construction work on the Kohala project has remained suspended since December 2018 due to the public concern over its ecological impact.   The Karot Hydropower Project is a run-of-river project, located near Karot in Punjab and Hollar in POK. A 100MW hydropower project near Karakoram International University in Gilgit, and an 80MW hydropower project in Phander area of Ghizer are other such projects in the region.  Obviously, this hydroelectricity production has given rise to transmission from power plants to National Energy Grid of Pakistan.

In November 2017, Pakistan dropped its bid to have Diamer-Bhasha Dam financed under the CPEC framework. Although not officially under the scope of CPEC, the 1,223 MW Balloki Power Plant, and the 1,180 MW Bhakki power-plants have both been completed in mid 2018, which along with the 969 MW Neelum–Jhelum Hydropower Plant completed in summer 2018 and 1,410 MW Tarbela IV Extension Project, competed in February 2018, will result in an additional 10,000 MW.

Similarly a fibre optical cable project covers an area of 820 km and will provide the ICT infrastructure for 3G/4G services between the Khunjerab Pass on the China-Pakistan border and the city of Rawalpindi. It has been constructed as part of the CPEC at an estimated cost of $44 million

China is a world leader in establishing SEZs, by 2017 having established and managing 77 SEZs in 36 countries. SEZ development has been adopted energetically at the heart of the Belt and Road Initiative (BRI).  In the host nation it would provide Chinese companies (and executives) near permanent presence, with a controlled channel for building familiarity with and exposure to local markets and economy.

Two Special Economic Zones (SEZ) are planned in POJK. A mixed industry SEZ is to be established at Mirpur over 1,078 acres.  It is situated 22km from GT Road Dina-Jhelum and 140km from Sialkot. It would be connected to main CPEC route via M4.  Currently 430 medium and small sized industrial units exist in Mirpur, with 5,681 people employed with them. The planned SEZ is 5 Km from proposed Dry Port at Mirpur with a railway link between Dina, Jhelum and Mirpur is being established. Special incentives have been offered by the POK government for investment in Mirpur economic zone, including tax-free import of machinery and other equipment, construction of infrastructure and permission to prospective investors to generate their own electricity to run industries at the local level.

It is a fact that with the exception of Karot Hydropower project, work on the other proposed projects has been slow or not initiated, primarily because of the non-release of funds or controversies regarding the project design and the ensuing environmental issues. POJK is in seismically and ecologically fragile and flood prone zone. GB has large mineral deposits, including metallic, non-metallic, energy minerals, precious and dimension stones, and rocks of differing industrial value. Mining is dominated by corporations mainly from China. In terms of value, annual extraction of gemstones from GB is worth around $3 million. Prospecting is on for other precious minerals.

Local communities have claimed that the Pak Government awards licences secretly to ghost companies either operating on behalf of the Pak Army or the Chinese. Pakistan has illegally awarded more than 2000 leases in GB for the mining of gold, uranium and molybdenum (which is used in space technology) to China. Chinese companies and labour are everywhere in GB, especially in the Hunza-Nagar district, which is rich in uranium. Far more serious is the creation of ‘no-go’ areas by the Chinese, who prevent locals from accessing these areas. This is apparent in some areas in upper Hunza, like Chapursan Valley, where the Chinese have done both tunnel building and mineral exploration.  Chinese has also leased areas in Astore district to extract high quality copper.

The GB region is losing its ethnic identity with planned demographic invasion and settling of population from Sindh and Punjab.  It is easy to state that CPEC in POJK may collapse under its own weight, due to local resistance, financing anxieties (especially the dire straits Pak economy is in currently), the ecological fragility of the region, serious vagaries of terrain, altitudes and weather and the geological apprehension of earthquakes/floods/land-slides.  Each one has the potential to put a serious spoke in the CPEC plans for POJK.

Yet, because of the enormous advantages for China (and Pakistan) – geo-politically, economically, in resources and for the Xinjiang Province, the plan should succeed in some measure.  If that happens, the entire POJK will be inundated with Chinese managers, supervisors and workers and movement of convoys.  Indeed, the Chinese workers may establish permanent presence by constructing their own administrative enclaves (as in Gwadar).

This projected makeover of POJK will become too calamitous in the next decade or so. The age-old socio-cultural character of POJK will be largely subsumed in this economic invasion of the area.  The transformation that is arriving in speed in POJK requires constancy in monitoring, as this change may have grave geo-strategic ramifications for India.