On 27 April 2020, the Stockholm International Peace Research Institute (SIPRI) released a data on the global military expenditure highlighting the rise to $1917 billion in 2019. Exemplifying an increase of 3.6 per cent from 2018 and representing 2.2 per cent of the global gross domestic product (GDP);[1] the key trends to note here are: first, it has been the highest level of spending since the 2008 global financial crisis and the largest annual growth in spending since 2010. Second, global military expenditure is 7.2 per cent higher in 2019 than it was in 2010. Third, five largest spenders in 2019, which accounted for 62 per cent of the expenditure, were the United States, China, India, Russia and Saudi Arabia- with two Asian countries ranking second (China) and third (India) in the list. Both China and India represent an ascending trend with 5.1 percent and 6.8 per cent of increase respectively. 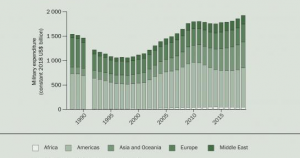 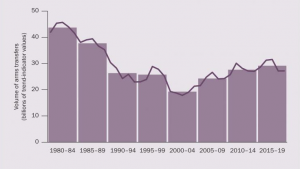 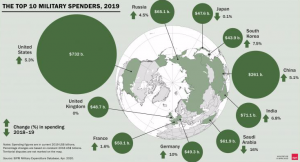 Given these statistics, it becomes imperative to understand the rationale behind China’s increasing numbers. Therefore, the big question is: What explains China’s military spending?

China’s military spending clarifies its intention of becoming  ‘World Class Military’  by 2050. But most importantly, the increased spending is reflective of China’s growing military ambitions, as demonstrated in its power projections. The test case being the South China Sea, the East China Sea, emerging interest to penetrate the Indian Ocean, where China still remains an outsider, adding to the old issue of the unresolved border with India, as witnessed in the 2017 Doklam standoff. In addition, Beijing aspires to become a security maximiser by use of high-end technology, as the 19th Party Congress report posits: “We [China] must keep it firm in our minds that technology is the core combat capability, encourage innovations in major technologies, and conduct innovations independently”.[5] This very objective is motivated by China’s pursuit of its ‘military missions and tasks’ that involves joint military operations across land, sea, air, cyberspace and outer space and the application of advanced technology, especially information technology– a prerequisite for ‘winning informationised local wars’.This is also linked to China’s rapid military modernisation programme which is targeted to be achieved by 2035.

What also explains China’s ascending military expenditure is its growing defence industry. Switching from being an arms importer, China now ranks as one of the top global arms exporters. With imports accounting for 4.3 percent, Beijing’s export accounts for 5.5 per cent of the global total[6]– the biggest beneficiaries of which are Pakistan and Bangladesh. This significant jump in China’s status highlights its significant transition from once being a backward industry to that of creating its own military-industrial complex (MIC)- with the private sector taking the lead. With “Tiananmen era bans” at the place, an innovative and efficient domestic arms industry was a crucial need for Beijing, which called for building a modern military force to safeguard its security claims. In this process, some of the key sectors that has boosted China’s MIC are atomic, aviation, microelectronics and shipbuilding. China’s top defence companies are as shown in the table below.

Source: Prepared by the Author

This clarifies that Chinese arms companies such as CSGC, AVIC, NORINCO, and CSSC are aiming to become the Chinese versions of American defence industry giants such as Lockheed Martin and Northrop Grumman or Britain’s BAE Systems. To argue so, AVIC with arms sales totalling to $20.1 billion,would rank sixth and NORINCO with sales of $17.2 billion (the world’s largest producer of land systems), would rank eighth in the world’s Top 100[7]– making China the second-largest arms producer after the United States and ahead of Russia. However, what distinguishes China’s defence industry or rather its MIC from that of the United States, is its shareholding structure, given it is mainly owned by the Chinese government. Hence, with these transitions in place, China’s defence industry has ably shed the old prejudice of being characterised by inefficiency, corruption, and poor performance, therefore,  replacing it with the chase for the “World Class Military Dream”.