Home Articles Coronavirus and China’s People’s War: To Be ‘Red’ or Not to...
Facebook
Twitter
Linkedin
WhatsApp
Telegram
Email
Print

On 19 March, given the rapid spread of Coronavirus epidemic since December 2019, People’s Republic of China (PRC) for the first time reported “zero domestically-transmitted COVID-19 cases” in Wuhan-the epicentre of the epidemic.[1] According to China’s National Health Commission’s (NHC) report, the current statistics are:  total number of confirmed cases on the Chinese mainland is 80,928, with the cumulative death toll of 3,245; and the total number of recovered cases is that of 70,420 (as noted in Figures 1 and 2 below).[2]

Figure 2. Trend of Recovery of COVID-19 Cases in Mainland China 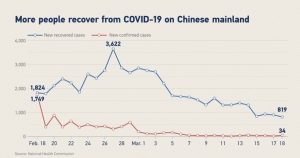 These positive trends do provide some relief to the growing threat scenario; however, a total fix to the epidemic remains to be uncertain. Although China’s domestic transmission is witnessing a downward trend, but the new challenge lies in controlling the infections imported from overseas as well as that of a relapse of recovered cases. Thus, calling for more red alarms in the future.

In the past, China did tackle the carnage of SARS in 2002-2003; however, COVID-19 epidemic has been called the “major public health emergency” since the founding of PRC in 1949. As Chinese President Xi Jinping remarked, “ [t]his is a crisis for us [China] and it is a big test”.[5] What does the ‘test’ imply?

Here, the implications of the ‘test’ can be argued under two perspectives: First, at the national level, with political stakes raised to new high for Xi, the biggest challenge is posed to the ‘leadership quotient’ under Xi’s ‘infinite rule’. Wherein, such a health emergency has shaken China’s domestic stability and most importantly, Xi’s absolute control as ‘Chairman of All-Things’. Second, at the global level, wherein China’s image of ‘responsible player’ is undergoing the test of time. The epidemic’s fallout globally has tainted China’s image on one end; while on the other end, in acting responsibly to tackle the virus outbreak China has set new precedents by taking stringent measures to minimise the risks of infections, such as: lockdown of Wuhan and other cities, cancellation of mass events, closing scenic attractions, suspending long-distance public transport and mainly, calling hundreds of millions of Chinese to stay indoors. Such stringent steps did provide dividends in absence of other alternatives, but COVID-19 has significantly raised concerns over the so-called ‘China model’.

While the two-fold perspective does qualify Xi’s ‘test’ conundrum; but what cannot be dismissed is the fact that COVID-19 has significantly resurfaced the litmus test of the old Chinese dogma of contestation between being a ‘red’ and an ‘expert’. What calls for the contradiction? In the words of Mao Zedong:

“Red and expert, politics and business are the unification of two pairs of opposites. [We] must criticize the a-political attitude. (We) must on the one hand oppose empty-headed politicos and on the other confound practical men. […] Ideological and political work is the guarantee for the accomplishment of our economic and technological work; it serves the economic basis. Ideology and politics are the commanders, the soul. A slight relaxation in our ideological and political work will lead our economic and technological work astray”.[6]

The query remains: Does this theory still apply to Xi’s China?  Undoubtedly, it does. Arguably, this phenomenon was well-witnessed in China’s delayed response to combat the epidemic at its earliest stage. Most notably, the death from Covid-19 of Li Wenliang- the doctor who sounded the alarm in Wuhan in December 2019 but was clamped down by the Communist Party officials- acting as the testament that being red still takes precedence over being an expert, even in times of crisis.

Furthermore, Xi’s expert based action-oriented approach for prevention and control of the virus outbreak also qualified for the ‘red’. In its national emergency response, Xi called for establishment of two bodies- Central Leadership Group for Epidemic Response and the Joint Prevention and Control Mechanism of the State Council for prevention and control of the COVID-19 outbreak. Wherein, Premier Li Keqiang was made to head the Central Leading Group for Epidemic Response, as unlike Xi, Li is the ‘expert’ in handing China’s crisis given the past records in dealing with the SARS epidemic in 2003. Most importantly, Xi’s muted behaviour in the early stages added with Chinese Party officials silence over the virus outbreak until late January exemplifies the Chinese tendency to put politics at the foremost.

In view of this, Covid-19 has greatly challenged China’s such a status-quoist approach. Wherein, drawing lessons from its own actions, PRC needs to take a re-look at its long held policy of upholding the Communist Party leadership even at the cost of the welfare of its people. If this be the trend, Xi’s objective to secure a decisive victory in building a moderately prosperous society by 2021 will face the biggest challenge of its times under the health crisis.  Moreover, even if Xi succeeds in dealing with the epidemic, there remains strong speculations over his infinite mandate. Hence, challenged by COVID-19, for Xi, it is time to cross the river by feeling the stones.