The influx of migrants from the Indo-Myanmar border after the military coup staged in February this year to three Northeastern (NE) states – Mizoram, Manipur and Nagaland – is a matter of concern for India as it may inflate the issue of insurgency problems once again in this region. Currently, more than 16,000 Myanmarese migrants have taken refuge in these states and more numbers are expected in the upcoming days [1]. Referring to the recent military coup in Myanmar, Reuters in an interview with a senior government source stated, “it is a genuine worry that if rebels cross over, it will give oxygen to Naga and Manipur insurgents” [2]. This report produces an indisputable security warning, which might increase insurgency-related activities in the Northeast region. Evidently, this infiltration might spawn the number of insurgent groups from the porous Indo-Myanmar border (refer to figure 1) in the NE region, especially in Manipur. Can this migrant influx in NE be a security challenge for India? What can India do in order to pre-empt this situation and ensure that the security ambience of the region remains safe?   This article attempts to answer these questions by emphasising on the origin and the nature of insurgency in the state of Manipur.

Manipur is known for its ethnic and cultural diversity since antiquity. It is a known fact that there was cultural harmony and a sense of brotherhood between Meiteis and hill tribes until ‘Hindu Vaisnavism’ arrived in Manipur. Subsequently, the introduction of ‘Aseng/ Amang’ (‘Pure/Impure’) implanted hatred and discontentment between Meiteis and Brahmins. Gradually, it had spread to other Meitei sub-groups who belonged to Scheduled Caste (SC) category and hill tribes largely [3]. The sense of the ‘other’ was so strong that the hill tribes regarded themselves as inferior to Meiteis.  Thus, there was a visible shift from the sense of ‘brotherhood’ to the sense of ‘otherness’ which resulted in the formation of separate groups based on ethnicity. Consequently, seeds of animosity were sown between Meitei and different hill tribes.

Gradually, this animosity further aggravated when Meiteis felt it unjust with hill tribes when they started receiving state ‘privileges’ as Schedule Tribe (ST) category. For instance, unlike the hill tribes, Meiteis do not have the right to protect their own lands from settlement and ownership despite being indigenous subjects of Manipur [4]. At the same time, hill tribes 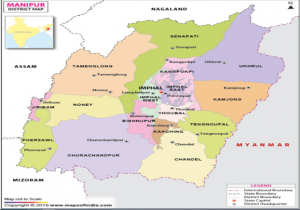 claim that Meiteis are more privileged and have more opportunities than tribes. This has been the contentious debate between Meities and hill tribes. Therefore, the growing intensive animosity among the different groups resulted in the formation of insurgent wings by each ethnic group making Manipur as the hub of one of the highest densities of hostile insurgent groups in India.

Multiple insurgent groups have been operating in Manipur since the 1960s as a shadowy Pan-Mongoloid movement. Figure No. 2 shows the illustration of different insurgent groups existing in the state at different points in time. While most of them are inactive and in the dormant stage, there are few which are active.  Unemployment is one of the major factors that act as a catalyst to the rise of insurgency. Scholar I.L. Singh contends “…insurgency in Manipur is directly linked with the problems of the educated, unemployed youth…” [5]. 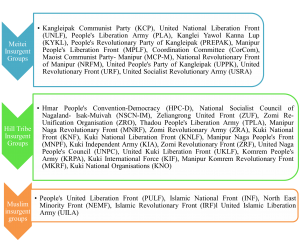 Meities insurgent groups were formed against the ‘Merger Agreement’ when Manipur was acceded to the Indian Union forcefully on 15 October 1949. These groups opposed the forceful instrument of accession by India, which implanted the seeds of secessionist tendency in Manipuris. Thus, United National Liberation Front (UNLF) was established under the command of Samrendra Singh in 1964. In addition, the sentiments of Meitei insurgents were hurt and they were worried regarding their identification fused with ‘Hindu India’, when it became a full-fledged state in 1972. Thereby, many groups were gradually mushrooming in the state. Another group called the Revolutionary Government of Manipur (RGM), separated from the UNLF, was formed under the command of Oinam Sudhir Kumar [6]. Besides, many other insurgent groups such as the People’s Liberation Front (PLF) on 25 September 1978, the People’s Revolutionary Party of Kangleipak (PREPAK) under R.K. Tulachandra in 1977 and Kangleipak Communist Party (KCP) in 1980 respectively sprang up [7]. Their common objective was to liberate Manipur through an armed revolution.

Hill Tribes and Other Insurgent Groups

Hill tribes’ insurgent groups such as the National Socialist Council of Nagaland—Isak-Muivah (NSCN-IM) in Naga inhabited areas, Kuki National Army (KNA), and Kuki National Front (KNF) in Kuki inhabited hill district respectively could be mentioned. Unlike Meitei outfits, their demands were to form their respective separate state along the line of different hill tribes, for instance, a separate state for Naga people and a separate for the Kuki homeland. They felt neglected and alienated by the government of Manipur. Further, they contend that in terms of representation at State’s Assembly, hill tribes have only 20 MLA representatives despite comprising 89 per cent of the total geographical area of Manipur. However, there are 40 MLA representatives from the valley, which comprises only 11 per cent of the total area [8]. That is why hill tribes’ insurgent groups demanded to create separate states of their own along the ethnic line. Besides, Pangals or Manipur Muslims also formed their own groups after Meitei-Pangal clashed in May 1993. People’s United Liberation Front (PULF), North East Minority Front (NEMF), Islamic National Front, Islamic Revolutionary Front (IRF) and United Islamic Liberation Army (UILA) are few instances [9]. The Meitei insurgents considered Pangal as Mayang meaning outsiders and that is why Meiteis and Pangals clashed took place. In due course of time, Meities insurgents even rebuffed the Bengali script and tried to revitalize the practices of the old Meitei religion [10]. Because of multiple clashes between different ethnic groups in Manipur, led to unsettling the dust of peace in the state. Figure 3 shows the diagrammatic illustration of the total number of active insurgent groups operating in Manipur currently. 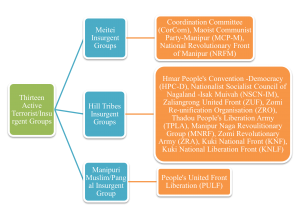 At present, there are seven proscribed terrorists/extremist groups, thirteen active terrorist/insurgents groups ( refer to figure no. 3) and twelve inactive terrorists/insurgent groups in Manipur. In the last two decades, a total number of 2117 terrorists/insurgents/extremists were killed. The highest numbers were 329 and 349 in the year 2008 and 2009 and the lowest were five and three in 2019 and 2020 respectively. In 2021, the numbers of terrorists killed were seven with zero civilian deaths [11]. Thus, there is a declining trend of fading insurgency and its related activities in the state.

The popular support gained by different insurgent groups in the 1970s and 1980s slowly faded away in due course of time. It is alleged that they were involved in extortion of resources such as demanding money from the Ministers, MLAs, contractors, collecting money from every government employee. People started feeling insecure and developed distrust towards insurgents. Not only this, youths began to indulge in criminal activities like stealing, prowling and accumulating money by disguising their identity as insurgent groups [12]. Besides, many factions and breakaways within insurgent groups were formed without any goals and ideology. All these above-mentioned factors are attributed to losing people’s faith in them and unwillingness to accept and support different outfits anymore. This led to the decline in the momentum of insurgency in Manipur. Nevertheless, this does not mean insurgency has completely disappeared from the state. There are some dormant outfits as well, which can become active at any time in the state. For instance, the influx of more Myanmarese migrants could incite the tendency of resurfacing insurgency in the state. Figure 4 shows a graphical representation of the declining trend of civilian casualties and the number of insurgent deaths in Manipur from 2011 until August 30, 2021. 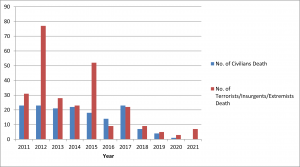 The graph shows the declining trend of insurgency after the National Democratic Alliance (NDA) governed the country since 2014. Consequently, the security situation in Manipur has also significantly improved. Major insurgent groups and factions in NE regions are now willing for an open dialogue [13] with the government but the question is how far it will be feasible to solve the issue from both sides.

In recent times, there is a clear trend of a gradual decrease in insurgency-related activities in Manipur. Nevertheless, it is a challenging task to maintain peace among different ethnic groups having distinct traditions, cultures and even languages. However, insurgency problems in the state can be minimised when the number of unemployed educated youths is employed, the more infrastructural project is developed in accordance with the interest of local people, doing away with regional deprivation and integrating the state with rest of the country.

In doing so, first, both the central and state government must come up with new counter-insurgency strategies for future prospects of the state. Second, jobs must be provided to unemployed youths and more opportunities must be open to the people of Manipur. Third, there must be an improvement in the state’s regional connectivity with its neighbouring state and bordering countries in terms of road, railway, inland waterway, and airway and more importantly people-to-people connectivity. The robust connectivity will not only improve infrastructure but will also provide an opportunity to people to export their local goods to national and international markets which in turn will upgrade their living standards. Sport is another field, which can be utilized for defusing tension and imparting development and connectivity in the state as sport lies in the heart of the people of Manipur and there lies a huge potential for sports in the state. Manipur is at the pivot of India’s Act East policy and proper development of state can contribute enormously to India’s ambition in acting eastward.

Insurgency in Manipur needs to be taken seriously especially after a military coup in Myanmar. The influx of Myanmarese migrants coming into the state can have a huge security implication and can lead to political instability in Manipur, which has been seeing the light of peace after prolonged insurgency. Therefore, in this context, it is in the interest of India to have amicable relation with Tatmadaw, which in turn will help to make the state peaceful and facilitate in extending the scope of India’s Act East policy.

India’s Foreign Policy in 21st Century: Between Embracing the West or the Rest

The Quest for Victory in 21st Century Warfare