Disruptive Technologies and how they are going to impact the emerging conflicts of the 21st century is something which every student of modern warfare is trying to understand. The sudden emergence of these technologies in a way disrupts the warfighting for times to come. The term Disruptive Technology was coined by Harvard Business School professor Clayton M. Christensen in his 1997 best-selling book, The Innovator’s Dilemma[1]. Christensen categorised new technology as being of two sorts, either sustaining or disruptive. Sustaining technology is the gradual development of existing technology. Disruptive Technology does the opposite, it revolutionises the field but comes with risks attached because it is new, untested and initially limited in scope[2].

Scotsman Alexander Graham Bell disrupted the way we communicate when he invented the telephone; and British computer scientist Tim Berners-Lee disrupted it again when he invented the World Wide Web. Now, the military and defence industry once again are facing their own Disruptive Technology challenges and dilemma[3]. In a report for the Centre for New American Security, Ben FitzGerald and Shawn Brimley defined Disruptive Technology in the defence sector as “technology or a set of technologies applied to a relevant problem in a manner that radically alters the symmetry of military power between competitors” which then “immediately outdates the policies, doctrines and organisation of all actors[4].”

Autonomous fighting platforms, cyber warfare and Unmanned Aerial Vehicles have already begun to impact warfighting. Directed Energy Weapons, Big Data Analysis, Internet of Things and Artificial Intelligence nearing their operationalisation will have a major impact on warfighting in the future. We may not see large armies, instead, we will see fewer humans on the battlefield who would be more technologically advanced “augmented humans”[5]. Russian cyber-attacks on Estonia in 2007 and Houthi directed drone attacks on Saudi ARAMCO in September 2019 have sensationalised the arena of warfighting in 21st Century.

Given India’s declining defence spending, persistently low investment in R&D and a small defence industrial base; there is a need to examine how these emerging Disruptive Technologies could shape the security environment and its military modernisation strategy. India faces complex threats and challenges that range from conventional, nuclear to sub-conventional spectrum. Both China and Pakistan have reported setting aside significant national effort in developing Disruptive Technologies such as cyber, information warfare (IW), artificial intelligence (AI) and unmanned autonomous systems. Commercially accessible technology advancements can be adapted for military use to advance Disruptive objectives[6]. Off the shelf available drones have been weaponised by ISIS and used as a potent hybrid threat.

Trends in Disruptive Technology and Military Strategy. Recent years have witnessed dramatic changes in the global technology environment due to their rapid advancements and the rate of its diffusion. Innovation today is increasingly driven by the commercial sector and produces technologies that must be adapted for defence purposes after production. This evolving interlinkage has been explained in the figure alongside highlighting three crucial business linkages namely Monopoly Suppliers, Current Defence Suppliers and Commercial Business (Dual-use technologies)[7]. 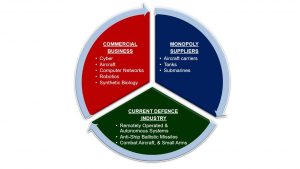 US Army Research Laboratory (ARL) created a group of military strategists and researchers to holistically analyse the sorts of Disruption these technological revolutions of the future will bring, with a target in mind: Tactical-Level Land Warfare in 2050[8]. Their conclusions were that emerging and yet-to-emerge Disruptive Technologies would require the wholesale re-invention of current tactics and doctrine. The main battlefield Disruptive Technologies highlighted by the ARL study[9] included Ubiquitous Robots, Bot Swarms and Mixed Teams (main tactical unit of the future will be a mixed human-robot team and that this will require fundamentally changing the human soldier[10]), Automated Decision Making Tools, Cyber Attack Weapons and directed-energy weapons (DEWs).

The future battlefield in 21st century is likely to be a lonely place with fewer humans on the battlefield, but more technologically enhanced ones – “augmented humans”[11]. This augmentation could see soldiers with exoskeletons, multiple implants, even genetic engineering to create seamless access to sensing and cognitive enhancements. The presence of augmented humans on 2050 battlefield is highly possible because the various components needed to enable this development already exist and are undergoing rapid evolution.

To develop Cloud Computing in military domain, Lieutenant General David Deptula (Retd), Dean of the Mitchell Institute of Airpower Studies, U.S. published a seminal policy paper back in 2018 outlining the Combat Cloud Concept, which in many ways was an early articulation of the Joint All-Domain paradigm as it stands today in US Defence Forces.[12] US Army has three small satellite programmes underway; namely Gunsmoke, Lonestar and Polaris; to provide space effects at tactical levels. Other NATO allies are also researching small satellite technologies to develop nano-satellite patrollers by 2023. Russian President Putin stated way back in 2017 that country which becomes the leader in AI “will be the ruler of the world”[13]. And certainly, the 2010s have been dominated by a new arms race in artificial intelligence. Chinese are well ahead in the race for Deepfakes and Disinformation. Concerns about growing disinformation campaigns were realised during the 2016 U.S. Presidential Election, and, as U.S. approaches November 2020; DARPA is working on developing deepfake detection systems[14]. Russia sent its Ural-9 Unmanned Ground Vehicle to Syria for testing and evaluation in 2017 and U.S. is currently working on its Next-Generation Combat Vehicle programme having unmanned assets for its future manoeuvre forces. Emergence of Augmented/Virtual Reality (AR/VR) in preparing for peer and near-peer high intensity conflicts will enable the defence forces to adapt their training processes and build more complex battlefield scenarios. When Defence iQ hosted its first Countering Drones event way back in 2016, there was a lot of scepticism towards the investment required in this deemed potential threat. Now, especially after Saudi ARAMCO incident, the appetite for investment in this field (Counter-UAS systems) has grown dramatically. Directed Energy Weapons are “no longer science fiction”. In May 2020, US has successfully test fired a high energy laser weapon which can destroy aircraft mid-flight. Perhaps, it may not be an exaggeration to say that the 2020s will be the decade of operational Lasers[15]. Both Russia and China have announced successful tests of their respective hypersonic missiles. The “Hypersonic Arms Race” has been a popular subject recently in the mainstream media.

Our networked societies are promoting a “democratisation” of technological dissemination[16]. The application of these technologies to new means and methods of warfare is aggravating an arms-racing dynamic in both conventional weapons and Disruptive Technologies. Lower risks of armed uncrewed aerial vehicles to armed forces and comparatively lower levels of physical violence is likely to lower their threshold of use and risk escalating the conflict. The growing use of UAVs and increased autonomy could lead to perceptions of casualty-free warfare. Concepts such as “left of launch” missile defence – the disabling of nuclear command and control structures by cyber means – could create “use it or lose it” mentalities for first strikes[17]. Experts have raised the possibility of AI deepfakes to spoof command and control or early warning systems. They may also try what many say “data poisoning”, deliberate alteration of operational data on which AI runs causing undesirable consequences. Because of such phenomenal risks, the digital age demands creation of “cyber deterrence” capabilities.

Challenges to India’s Military Modernisation and Disruptive Technologies. Many of these new Disruptive Technologies highlighted above are largely the product of commercial developments and driven by private sector. The challenge to Indian Armed Forces is not only to integrate these advances into military systems but also align the acquisition system, budgeting and manufacturing base. The innovation cycle for many of these technologies are much faster than traditional military programmes. China is already integrating second and third offset technologies into military capabilities at an alarming rate. However, the bigger danger to our military modernisation road map in the long run is the very low fiscal and national commitment on R&D in these cutting edge Disruptive Technologies. By the end of 2030, when our modernisation plan peaks with second offset technologies, China is likely to induct third offset technology systems which can seriously Disrupt the application/functions of our current and in pipeline modernisation inventory[18].

Way Forward. Fiscal pressure is forcing Ministry of Defence to modernise incrementally; an uneconomical approach that does not address the threat holistically. Besides exploiting the potential of C-DAC and newly created Army Design Bureau; a Next Technology Office (NTO) could be set up under the National Security Adviser to assess the implications of these emerging Disruptive Technologies. NTO should plan series of wargames by bringing together military professionals, planners, scientists, engineers, investors, ethicists, policymakers and lawyers from a variety of backgrounds to debate and identify the impact of these game-changing technologies. To encourage Defence R&D especially in Disruptive Technologies, the top-down focus would be capacity-building based on NTO recommendations. To promote Private Sector Defence Industrial Base, the government need to execute a surgical strike on the non- performing DPSUs. It should also encourage MSMEs to provide technology, especially the dual-use technology.

Disruptive Technologies are often viewed as a radical challenge to existing technologies and initially fail to meet military requirements in short/mid-term horizon. However, most of the Disruptive Technologies have dual-use and are being driven by commercial entities. An overarching national mission to identify the needs and congruence of these products into military applications must form part of the Indian Armed Forces modernisation strategy.

[4] Ben FitzGerald and Kelley Sayler, ‘Technology, Strategy and the Future of the Global Defense Industry’, n.d., 49.

[5] Sud, ‘Disruptive Impact of Technologies on Defence and Initiatives Taken by the Government – Centre for Land Warfare Studies (CLAWS)’.

[12] ‘The Combat Cloud at the Heart of the Future Combat Air System’, Defense.Info (blog), 19 June 2019, https://defense.info/multi-domain-dynamics/2019/06/the-combat-cloud-at-the-heart-of-the-future-combat-air-system/.

Col Surjeet Singh Tanwar is an alumni of RIMC, NDA, Defence Services Staff College, Wellington and Mvre Centre of Excellence (MCoE), Fort Benning, USA. The officer has served in High Altitude Area along LAC and as part of Indian Contingent in UN Mission in Congo.