O divine art of subtlety and secrecy! Through you we learn to be invisible, through you inaudible; and hence we can hold the enemy’s fate in our hands.

Post-Independence of India, the dizzy altitudes of Himalayas have witnessed substantial warfare, commencing with 1948 between India and Pakistan in Jammu and Kashmir. The surreptitious invasion of the Pakistani Army couched as tribal/ irregular invasion in 1948, was pushed back substantially due to resolute offensives. It included the capture of the lofty heights of Pir Kanthi and Ledi Gali on the Pir Panjal Range. Historic is the story of Lt Col Sher Jung Thapa, MVC,  whose tenacity, courage, commitment and ability to motivate his two officers, two JCOs and 72 Other Ranks under most adverse conditions of a siege at Skardu from 02 Dec 1947 to 14 Aug 1948 has few parallels in the annals of military history. The Indian Army pulled off the unthinkable — deploying a squadron of Stuart Mark 6 tanks of 7 LIGHT CAVALRY located at Akhnoor across the Pir Panjal Range, at the 11,553 feet high Zojila Pass (he Pass of Blizzards), thereby shocking the enemy and routing him.

The reverses of 1962 left indelible memories, but provided all-important experience, and goaded the preparations to ensure territorial integrity. Even in the reversals of 1962 War, there was the great saga of immense valour and raw courage in the defensive battles of Rezangla, Gurung Hill in Chushul Sector and Sirijap on the Pangong Tso in Ladakh. Contesting the Chinese offensive into Chushul were six AMX-13 tanks of the 20 Lancers Regiment, airlifted on the night of 24/ 25 Oct 1962. These tanks were critical in stopping the Chinese advance and deny the Spanggur gap. Both in 1965 and 1971 Wars, the Army captured the towering Point 13620 astride the Shingo River in Kargil Sector. The capture of Haji Pir Pass and the massif of Bedori in 1965 exhibited planning, valour and fortitude.  The Indian forces faced conflictual scenarios against PLA in the Nathu La-Cho La (Sikkim) skirmish in 1967[1] and Sumdorong Chu (Arunachal Pradesh) in 1987[2], and came upon the top!

The Kargil War of 1999 is another story when Pakistan had furtively occupied heights of Drass, Kargil, and Batalik above 5000 meters. This was the crowning glory, when the army and airforce, with one hand tied on the back, exhibited an epitome of courage and resilience unseen. The Indian artillery fired over 2,50,000 shells, bombs, and rockets during the Kargil conflict.  The Bofors guns inflicted huge casualties on the Pakistan forces in Kargil war used in a direct-fire role weapon. A preponderance of firepower had been concentrated at Kargil totaling 300 guns, mortars, and Grad BM 21 MBRLs. Approximately 5,000 artillery shells, mortar bombs, and rockets were fired daily from 300 guns, mortars, and MBRLs while 9,000 shells were fired the day Tiger Hill was regained. Tiger Hill is forever a household name.[3] The dizzy heights of Siachen Glacier and the Saltoro Range, as the highest battlefield in the world, are continually witnessing conflictual scenario since 1984.

Hence, be it Haji Pir, Bana Top (on Northern Siachen Glacier) or Tiger Hill (Kargil) in offensive operations; Poonch (1971), Rezangla and Walong (Arunachal Pradesh) in stoic defence, and in combating terrorism, Indian Army has proven it by blood, fortitude, courage and planning. 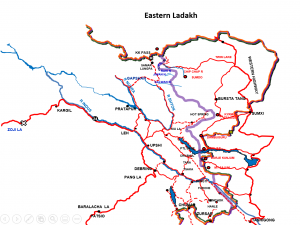 History and experience of high altitude warfare and constant combat with terrorists behind us, it is necessary to fast forward and examine. It is a given that any rapprochement on demarcating the LAC on the ground with China or resolving it in finality does not seem even in the distant horizon.[4] Since April 2013, the ‘faceoffs’ have transcended to another level, that does not lead to disengagement for a very long time, fisticuffs, brawls, use of batons and finally firming in an adversarial atmosphere, till resolved through BPMs.[5] Doklam, Raki Nalla, Chumar, Pangong Tso, Demchok, Hot Springs and Naku La are names that immediately come to fore. These are at the tactical level, and own troops exhibit immense control and resilience, and yet forcefulness and firmness.

Lately, grave concerns have been raised of the ‘transgressions’ that have happened at Galwan River, Pangong Tso and Hot Springs in Eastern Ladakh. While the extent and details of transgressions have not been placed by the Army/ Government in the public domain, the vacuum of information has led to conjecturing of Chinese firming in the substantial territory, with implausible numbers of PLA personnel, their locations and deployment. Writers, experts, veterans and ‘analysts’ have utilised maps/ satellite imageries/ goggle pictures or ‘informed sources’ to indicate fictional deployments in the proximate heights of the areas of transgressions. Without the benefit of confirmed information, such submission is vain.

Line of Actual Control (LAC) is largely un-held. The PLA would well recollect the strong methodology followed by the Army in 2013/ 2014 at Chumar and later 2017 in Doklam, to deny their designs. There are vast unheld areas or infiltration routes in Eastern Ladakh that lend to viable quid pro quo options, easily within the capabilities of the holding formations with resoluteness.  PLA should be loath and impetuous to extend the transgressions to defensive deployments in the heights, for the trepidation of quid pro quo response. That would certainly be escalatory in nature.  Hence, without official authentication and confirmation, such thought-process is presumptive. It is argued that if perchance, PLA has, as a first time, resorted to physical deployments and holding of ground in higher reaches, unabashedly own army units would have applied quid pro quo options, in the vast open spaces of LAC.

While sustenance of force of Chinese and Indian troops is generally not problematic, Galwan River is another story.  From the Depsang Plateau road head to sustain PLA force through to the lower reaches of the Galwan River, will stretch it, will require half-links for lugging, and naturally limit the quantum of force. The incoming news reports of some disengagement and move away at Galwan River LAC should then be as expected.  The talks at Corps Cdr level, scheduled as a first of its kind Border Personnel Meeting (BPM), should endeavour the return to status quo, thrash out measures to avoid physical brawls of the kind that happened in May 2020 (and earlier) and decide on proximate infrastructure construction, as Indian Army is endeavouring.

The saying goes, that the best teacher of war is war!  And wars have been a historic constant; however, warfare has always remained evolutionary. Currently, winning wars implies the ability to wage war comprehensively in all domains and achieve the political aim. Also, future conflicts are expected to be short, fast-paced and intense, non-kinetic or kinetic, non-contact or contact. There are theorists that have deep reservations on the likelihood of all-out inter-state conventional wars. With the focus on socio-economic development, neither India nor China desires a conventional war. And if conventional wars do happen, they could be limited in varied parameters.

The wars of Post-Independence India and the continued war-like deployment along the Himalayan Massif had hardened the Indian Armed Forces to the vagaries of the mountain and high altitude warfare. To that can be cumulated, the incessant employment of units in mountains and higher altitudes in counter-insurgency and counter-infiltration in Jammu and Kashmir and the North East.  Without unnecessary bravado, in territorial wars across the LAC, be it offensive or defensive, the capabilities, experience, and design of the Indian Army will be solid and most credible, even in the present-day scenario.  India will plan to offset and defeat the force asymmetry in China’s favour, by degradation, by the admixture of asymmetric warfare, kinetic strike, defensive layout in tiers and offensives. Asymmetric warfare contextually will encompass using linear defended lines as tripwires, and saturate the battlespace with strong deniability by focused and imaginative ruse and subterfuge. As salience and preparations for modern conventional kinetic war cannot put on back-burner, substantive offensive capabilities, duly acclimatised, trained and kitted, must be available for achieving ‘across the hump’ success and consolidation. In prosecuting the war in the mountains, and despite the given that mountains favour defence, the Erwin Rommel quote, ‘I would rather be the hammer than the anvil’, is apt.

Au Contraire, it has been analysed that PLA now characterizes and understands modern warfare as a confrontation between opposing operational systems rather than merely opposing armies. The wars with China, if ever, maybe wholly non-kinetic in nature, in modern warfare domains of information warfare, space & cyberspace, and electronic spectrum that may cripple critical infrastructure. Or in the fields of precision weaponry – ground or air-delivered and autonomous systems that may be aimed to incapacitate critical and defensive infrastructure and forces. Hence, Indian Armed Forces need to:

Though Indian Armed Forces do not play Wei-chi, the game of go, they know the art of warfare, learned through grit and determination over seventy years, with many a bullet having swished past the current rank and file.  We have also imbibed in Sun Tzu and are prepared!

On China, India Needs to ‘Seek Truth from Facts’ & Be Prepared

Kuwait’s Expatriate Quota Bill: How does it concern India?

On China, India Needs to ‘Seek Truth from Facts’ & Be Prepared

Articles Dr. Amrita Jash - July 10, 2020
0
The year 2020, which had the potential to be a landmark in India-China relations against the 70 years of diplomatic ties, but murphy’s law...

Intern Articles Thejus Gireesh - July 9, 2020
0
INTRODUCTION India and France have been enjoying a steady and fruitful relationship over the years. Post-Independence, India experienced a globally stable yet a ‘fluctuative relationship’...

Articles Alakh Ranjan - July 9, 2020
0
The Chinese footprint has been growing in South-Asia in recent years. It has been applying smart power diplomacy i.e. a combination of hard power...

Disclaimer: The views expressed and suggestions made in the article are solely of the author(s) / editor(s) in their personal capacity and do not have any official endorsement of CLAWS, Indian Army or the Government of India. Attributability of content lies purely with the author(s) / editor(s).
FOLLOW US
© 2008-2019 Centre for Land Warfare Studies (CLAWS). Website By, Syntactiq Labs.