The last of the terrorist fighters of the Islamic State (ISIS) are currently being driven out from their last holdout in the eastern Syrian village of Baghuz by US-backed Kurdish and Arab militia. At the same time, the group continues its transformation into a large covert network spread through the Levant. It is because of its transformation from a centralized terrorist organization to a covert network with multiple semi-independent affiliate terrorist groups across the globe that ISIS still remains a threat to global peace and world order. As I argue below, while the loss of territory will ‘damage the ISIL brand’[i] and remove some of its sources of funding, the current expulsion of ISIS fighters has only dented the group, not defeated it.

Clad in flowing black robes, ISIS leader Abu Bakr al-Baghdadi announced from the pulpit of the Great al-Nuri Mosque the creation of the Islamic Caliphate in Iraq and Syria on July 5, 2014. By the end of 2014, his foot-soldiers had captured and controlled ‘one-third of Iraq and one-third of Syria — a land mass roughly equal to the area of Great Britain — where the extremist group ruled over upward of 9 million people’[ii]. These people were controlled and subjugated with the help of more than 40,000 foreign fighters from 110 countries[iii]. With its numerous fighters filled to the brim with the latest offerings of weapon technology (ISIS mastered the weaponization of commercially available drones, for instance) and socially adept with recruitment, persuasion and monitoring through social media sites, ISIS became the most modern, most technologically savvy, and the most successful terrorist group in modern age.

And then, within a span of five years, the self-declared caliphate completely disappeared.

The fight against one of the largest and most diverse terrorist groups, i.e., ISIS, was long and hard. It spanned, ‘1688 days – lasting 3 months longer than World War I and involved 80 countries in the broader campaign; 14 kinetic international allies; and local forces in Iraq and Syria’[iv]. It was also the first ‘battle’ against a non-state armed group that moved beyond only conducting kinetic attacks and driving the terrorists out of their holdouts in a battlefield, and moved into a new battlespace which included confining and then restricting and deleting their online presence, use of airspace (ISIS made long and clever use of weaponized drones, and US-backed and Russia-backed forces retaliated), and challenging their narrative and idea of state. 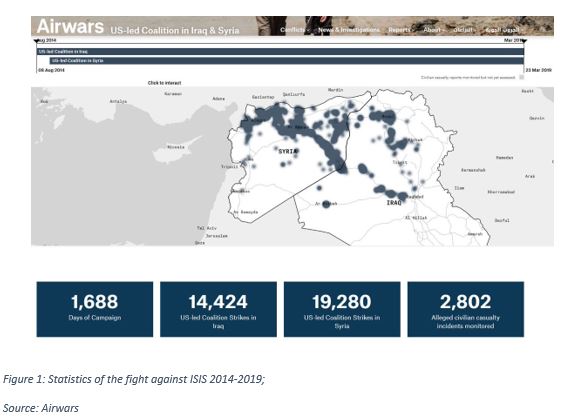 The various governments and militaries involved spared no cost in fighting the Islamic State. In the 34,000 air and artillery strikes carried out by the international allies, more than 116,000 munitions were released from the air[v]. Apart from the air strikes and cyber warfare conducted against ISIS’ online presence, hundreds of troops from various countries were involved in the on-ground assault. The Russian-backed Syrian forces defeated ISIS at Palmyra, while Turkey fought the group in Al Bab and US-backed forces were involved in fighting ISIS at Mosul.

Despite facing the world’s strongest and best-funded militaries, and their latest technology, ISIS managed to withstand their offensive actions for months at each of their strongholds. A United Nations report from late 2018 notes amidst the multiple strikes against ISIS that, ‘while the so-called “caliphate” has suffered attrition of its leadership and bureaucracy, and some delegation of authority has been unavoidable, collective disciple is intact’[vi]. ISIS had managed to create a dedicated cadre of followers capable of conducting coordinated military attacks worldwide – whether its leadership remains intact or not. And it is because of this dedicated staff of jihadist that ISIS remains strong and standing threat to the world.

In a manner similar to al-Qaeda, ISIS has spread this group of dedicated cadres across Africa, Asia and the Middle East. It has morphed from a proto-state structure into a global covert network with regional affiliates and associates, each of which are now prioritizing local operations. By organizing itself into a cell-like structure with local people and local attacks, the new ISIS sub-groups can now replicate key leadership functions without a central leadership. A February United Nations report notes that these ‘provincial networks are expected to develop financial self-sufficiency, although limited funding is still disbursed from the centre’[vii].

While the financial resources of ISIS has declined, it has not yet lost everything. With the loss of its territory, the terrorist group will no longer have access to oil, tax, mining and antiques laundering money. As these sources of income are unavailable to the group, it has turned to other avenues for financial incomings. This has included small-amount mobile money transfers by former ISIS members and sympathisers, control of mines in certain parts of Africa, and most importantly, they can now have access to aid money as well as money which will now be pumped into Syria and Iraq for reconstruction. In the same February report of the UN, the Secretary-General notes that ISIS still has ‘access to financial reserves of between $50 million and $300 million’[viii].

With its financial reserves rivalling some militaries, ISIS can therefore still access weapons and explosives material from weak states as well as those dealers who would have no qualms about selling arms on the black market for a price. The danger posed by its returning foreign fighters armed with knowledge of making improvised explosive devices and weaponization of drones will continue to pose as a threat to the world. Though there may be a decline in the number of successful terrorist attacks, ISIS with its strong and dedicated cadre of fighters will continue to show high levels of inspired terrorist attacks. The immediate relative calm that we can expect to see now that ISIS has lost territorial control in Iraq and Syria is therefore not ‘a loss of terrorist motivation but disruption of the capacity of ISIS to plan and execute attacks’[ix].

The military victory achieved against ISIS is certainly a call for celebration. Militaries from across the world coordinated, fought, and have finally reduced one of the world’s smartest, most strategic[x] and most lethal terrorist group that had manged to conduct coordinated attacks across the world to nothing.

But it is not defeated. While ISIS no longer controls territory and has a reduced core leadership, its covert network thrives under the leadership of Abu Bakr al-Baghdadi. In a recent document, ISIS laid down its objective for the post-caliphate period: to undermine stabilization and reconstruction activities, target infrastructure rebuilding efforts and in general thwart economic progress[xi]. The international community came together to drive ISIS out of the Levant to ensure peace and stability in the region. Now it must come together again to fully defeat and annihilate the Islamic State – to reduce it to nothing.

Intern Articles Urooba Ahmad - November 16, 2021
0
The Bear Trap (Afghanistan Untold story) was written down by Mohammad Yousaf a retired brigadier under Pakistan Army along with his friend Mark Adkin,...