The Middle East, since early this year, witnessed a sequence of events pertaining to the political and economic dimensions of the region.  The exit of Qatar from the Organization of Petroleum Exporting Countries (OPEC), the continuing proxy conflict between Iran and Israel, the hike in oil prices, re-imposition of sanctions on Iranian oil, attacks on oil tankers[[i]] and destruction of United States of America (US) drone by Iran[[ii]] in the Strait of Hormuz has only alarmed the region. Tension across the Strait of Hormuz since early June has affected the international oil market leading to hike in prices[[iii]]. The hostile situation at the chokepoint has also brought anxiety to the nations near to the strait.

Why is Strait of Hormuz World’s Most Important Choke Point?

The Strait of Hormuz is situated between United Arab Emirates (UAE), Oman and Iran, connecting Persian Gulf with the Gulf of Oman and Arabian Sea, and large volumes of oil transits through the chokepoint. With the global oil consumption standing at 100 million barrels per day(mb/d), it is important to note that almost a fifth of oil passes through this chokepoint.  In 2018, on a daily basis, there was a flow of approximately 21 million barrels per day (mb/d) of oil (Figure 1)HormuHormuz and  on an average.  According to US Energy Information Administration (EIA), 76 percent of crude oil and condensate in 2018 that went through the strait was for the Asian markets[[iv]].

It is evident from Figure 1 that oil flows through the Strait of Hormuz is crucial to the world economy. India and China together import approximately 6 mb/d of crude oil through the Strait while Saudi Arabia moves most of the crude oil[[v]]. If the traffic of ships gets limited or gets stopped due to some unsolvable security issue, then it would lead to indefinite hike in oil prices; that would automatically affect the world currencies and international markets. Even a temporary inability of oil transit via a major chokepoint can lead to hike in shipping costs and subsequently resulting in higher energy prices. However, majority of the chokepoints in the world could be bypassed by temporarily using other routes which might add significantly higher transit time; but some chokepoints do not have practical alternatives due to geographical limitations.

The recent tanker attacks in the region along with increasing tensions between US and Iran after the latter shot down US’s drone near the chokepoint has raised regional tensions to a high.  However, it is imperative for India to keep its flagged ships safe from any danger and to avoid the airspace until the tensions subside.

India being one of the largest consumers and importers of oil and energy sources in the globe, is very concerned about the heightened tensions in the Strait of Hormuz. After the attacks on oil tankers near the Gulf of Oman earlier in May, the tensions prevailed but the gravity increased post the shooting down of US drone by Iran in the Persian Gulf region. India has been cautious and has deployed two of its navy vessels- INS Chennai and INS Sunayna[[vi]], to safeguard Indian flagged-ships moving through the chokepoint. However, Indian Navy’s statement reads,

“The Indian Navy launches Operation Sankalp in the Persian Gulf/Gulf of Oman to re-assure Indian flagged vessels transiting through the area following the recent maritime incidents in the region”[[vii]].

Along with this, the Director General of Civil Aviation (DGCA) cautioned Indian airlines to avoid the air route via Iranian over-water airspace; however not barring any of them from using the over-land airspace[[viii]]. The twitter post of the DGCA on 22 June 2019 reads,

“All Indian operators in consultation with DGCA have decided to avoid the affected part of Iranian Airspace to ensure safe travel for the passengers. They will re-route flights suitably”[[ix]].

This precautionary advice from DGCA to avoid Tehran over-water airspace will not affect Indian airline services much as the impact would be limited to some Indian carriers including Air India’s flights way back to India from the west and Indigo’s Doha-Istanbul-Doha[[x]]. However, the flights have been avoiding the Pakistan airspace since 27 February as they have closed their airspace[[xi]]. It has been decided that flights way back to India would take the route via Saudi Arabia and Muscat (Figure 2). But with these restrictions and change in route, there would be concerns with delay and hike in flight rates, but would be in the safer side with the heightened tensions in the Persian Gulf.

Figure 2. Old route and Route likely to be taken 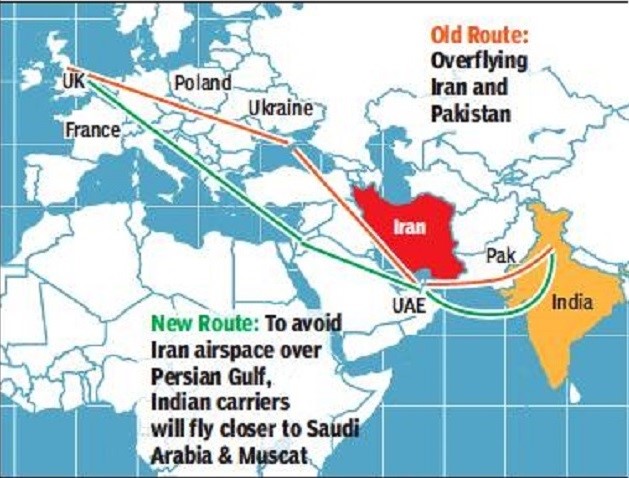 The escalating tensions in the Strait of Hormuz have hiked the crude oil price and may lead to rise in freight and insurance costs. While the US – Iran tensions have been growing since the re-imposition of sanctions on the latter by the former, the recent oil tanker attacks and shooting down of US drone by the Iranian Quds Forces has only magnified the anxiety. India has been showing concerns over the oil price rise as it has risen five percent in a week[[xii]] since the US- Iran conflict. It is imperative to note that India imports eighty four percent of its oil[[xiii]] needs and majority moves via the Strait of Hormuz and any disturbance in supply or price hike would be very costly and damaging. The risk has shot up and it would affect India significantly as it is an important oil consumer. Even though diplomatic talks have been held with top oil producers[[xiv]], the geo-political situation would cause economic fluctuation in the world markets until a resolution is sought out in the Persian Gulf. Perhaps India has to take alternative routes which are longer and expensive along with diplomatic understanding with the oil producing nations to protect its economic interest and Diaspora in the highly-tensed region.