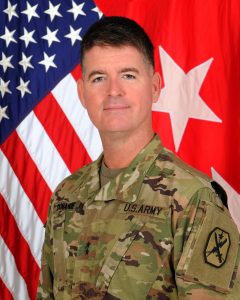 Major General Patrick J. Donahoe, a native of New Jersey, was commissioned an Armor Officer through Villanova University in May 1989. He has served in numerous company grade and field grade Armor and Cavalry positions in the continental United States, Germany, Bosnia, Kuwait, and the Republic of Korea.
He most recently served as the deputy commanding general for Operations, Eighth United States Army in the Republic of Korea. Prior to serving in the Republic of Korea, he was the deputy commanding general for Operations and acting senior commander, 10th Mountain Division, Fort Drum, New York. His other General Officer assignment was as the CJ-5, director of Plans, Headquarters Operation Resolute Support in Afghanistan.

Other previous assignments include Commander, 1st Battalion, 67th Armor Regiment, 4th Infantry Division at Fort Hood, Texas. While in command, the unit deployed to Iraq where the battalion conducted counterinsurgency operations in Babil and Karbala provinces and earned the Valorous Unit Citation for actions against the enemy.

Following battalion command, he was assigned to the National Training Center at Fort Irwin, California where he served initially, as a battalion trainer leading the Scorpion Team, and then led the Bronco Team as the brigade trainer. He commanded the 4th Cavalry Brigade at Fort Knox, Kentucky. He also served in Afghanistan as the Senior Advisor to General Sher Mohammed Karimi, the chief of the General Staff of the Afghan National Army. Following that assignment, he served as the chief of staff at, U.S. Army Maneuver Center of Excellence at Fort Benning, Georgia.

He is a graduate of the Armor Officer Basic and Advanced Courses, the United States Naval Command and General Staff College, and Senior Service College Fellowship at Harvard University. He holds a Bachelor of Arts in History, a Masters of Advanced Military Studies, and a Masters of National Security and Strategic Studies.