Welcomes You for a Book Release

“The Concept of Active Defence in China’s Military Strategy” 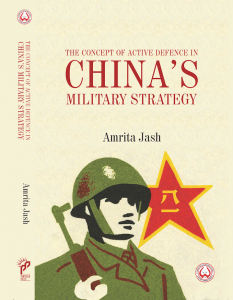 
About the Chief Guests

He was awarded India’s second-highest civilian honour, the Padma Vibhushan, for his contribution to the field civil service, in 2007.

Gen PS Rajeshwar is a graduate of the Indian Military Academy and was commissioned into the Regiment of the Artillery in December 1980. A gunner and an aviator, he is an alumnus of the Defence Services Staff College, the Army War College and the National Defence College in New Delhi and the Philippines.

Lt Gen PS Rajeshwar has actively taken part in Operation Meghdoot and Operation Rakshak. Further, he has commanded a Medium Regiment in Operation Parakram, an infantry brigade on the Line of Control, Counter Insurgency (Romeo) Force in Jammu & Kashmir and a Corps in the Desert Sector. He has served on various Staff assignments and has served as UN Military Observer in Mozambique and Rwanda.

He was the Chief of Integrated Defence Staff to the Chairman, Chiefs of Staff Committee (COSC) after this, the officer took over as the 14th Commander-in-Chief of the Andaman & Nicobar Command (CINCAN) on December 01, 2019

China’s Rise is driven by the self-fulfilling prophecy of the Chinese Dream of “great rejuvenation of the Chinese nation”- A strong country with a strong Army! Beijing’s economic miracle has translated into a call for military preparedness guided by the logic of “fight and win”. Wherein, China’s quest lies in perfecting the art of being ‘combat-ready’ with the aim of making the People’s Liberation Army a “World-Class Military”. While Beijing maintains that it has a defensive posture; however, its growing military capabilities increasing unilateral behavioural dispositions highlight an ‘offensive’ intent- demonstrating the ‘China Threat’. This very context calls for the probe: Does China Walk by Design? Thus, the need to decode ‘China’s Military Strategy’. It is, therefore, of interest to trace the evolution of the key concepts such as “active defence”, that define and shape China’s military strategy.

This book further advances the long-standing debate on China’s military strategy from the perspective of the ‘concept of active defence’. Here, ‘active defence’ is understood from the perspectives of its basic notions, China’s national and core interests and the aspects of its implementation to assess China’s strategic intentions and the implications of its military capabilities. This book is an attempt to provide a lucid and comprehensive account of China’s military strategy. The book would be of interest to military professionals, policymakers, academics, practitioners and China watchers.

Dr Amrita Jash is Research Fellow at the Centre for Land Warfare Studies, New Delhi. She is a recipient of the prestigious Pavate Fellowship at the University of Cambridge. Currently, she is the Managing Editor of CLAWS Journal. She holds a PhD in Chinese Studies from Jawaharlal Nehru University. She received the Chief of the Army Staff, General Bipin Rawat’s commendation in 2019 for contributing to the field of Chinese Studies.

Dr Jash has been a Visiting Fellow at the Department of Politics and International Studies (POLIS), University of Cambridge; a UGC Graduate Fellow (2012-2017); a researcher under Harvard-Yenching-Nanching Programme (2015); a researcher under China’s Ministry of Commerce (2014); and a US-INDIA-CHINA Initiative Fellow SAIS-Johns Hopkins University (2013). She has co-edited a book on COVID-19 & Its Challenges: Is India Future-Ready? (Pentagon Press, 2020).

Dr Jash studies China’s foreign policy, the PLA, and security and strategic issues related to: India-China, China-Japan and the Indo-Pacific.