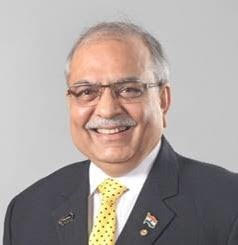 He has a rich, more than four decade long career in L&T, and has been instrumental in growing the nascent Technology and Product Development Group of L&T’s corporate R&D with a focus on top end inter-disciplinary Product Development.

Mr. Patil has spearheaded the company’s foray in the Defence sector since the inception of this segment in L&T in mid-eighties; a decade and a half ahead of the opening up of Defence Production for participation by Private Companies in 2001 (licensing it in 2002). He led the development efforts for the first orders for weapon delivery systems from DRDO for missiles under IGMDP with Dr Kalam at the helm.

Over the years, with his leadership, L&T built a portfolio of indigenous, in-house products, systems and technologies both on its own and by teaming up with DRDO and with the Indian Navy, and is today engaged in design-to-delivery of solutions across its chosen Defence segments.

Mr Patil is also responsible for the Strategic initiative ‘L&T-NxT’ launched recently by L&T as market offering through use of new age technologies, such as IIoT, digitalization and analytics, Artificial Intelligence, Augmented / Virtual Reality, Geo-spatial applications and Cyber Security leveraging the Domain expertise of L&T across diverse Industry segments.

Mr Patil also oversees Smart Cities, Safe Cities and Communication business. Over the last four years since beginning this as an initiative, L&T has emerged as the largest Indian player in this sector with series of success stories such as Kumbh mela, Odisha costal storm warning system, and converting our cities into smart across 26 major cities of India.

He is President of Society of Indian Defence Manufacturers – a unique society representing Indian Defence Industry with focus on indigenising the Defence Sector, and was founder Vice President of SIDM, setup under the aegis of the CII. He is a member of CII National Committee, Chairs CII committee on Strategic Manufacturing and member of Associations council of CII. He also serves on the PMA – India Managing Committee.

He has been conferred Honorary Fellowship by Indian National Academy of Engineering (INAE) and the Project Management Associates – India. Mr Patil has been honoured by IIT Bombay, his alma mater, with the prestigious Distinguished Alumnus Award in the Diamond Jubilee Year of the Institute.