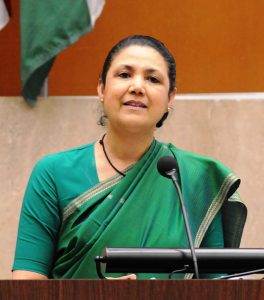 Meera Shankar was India’s first woman Ambassador to Germany. She also served as India’s Ambassador to the USA. As an Additional Secretary in the Ministry of External Affairs, she headed the Division dealing with International Organisations and Security issues. She negotiated and signed the agreement with Pakistan on the Pre Notification Of Ballistic Missile Flight Tests. She has long experience of dealing with India’s neighbors, Nepal, Bhutan, Bangladesh, Sri Lanka, and SAARC. As Director she worked in the Prime Minister’s office for six years under four Prime Ministers. She has also headed the Indian Council of Cultural Relations as its Director-General. As Minister (Commerce) in the Indian Embassy in the US immediately after the economic reforms of 1991 she played a key role in building trade and investment ties with the USA.
She now serves on the Boards of several companies as an Independent Director and on the Governing Body of a, not for a profit think tank. She currently chairs the FICCI Committee for mentoring women for Corporate Boards.