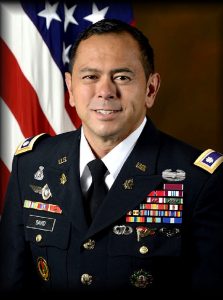 He is currently serving as the DACOS G5 for the NATO Allied Rapid Reaction Corps and was recently the US Special Advisor to the Chief of General Staff of the British Army (UK 4-Star General). He served as the Chief of Staff for the Army Future Studies Group in Washington D.C. under General Mark A. Milley. LTC David redeployed in 2017 from Afghanistan where he served as the Commander’s Initiative Group Chief for the Special Operations Joint Task Force – Afghanistan (SOJTF-A). Prior to deployment, he served as a fellow in the Chief of Staff of the Army’s Strategic Studies Group. He has served in a variety of leadership positions from platoon leader to battalion commander and in key staff positions leading planning teams and staffs. LTC David deployed routinely on overseas contingency operations to the Middle East, Southwest Asia, Central Asia, and Pacific. He was awarded a Legion of Merit medal, two bronze star medals, four meritorious service medals, the defence meritorious service medal, and the combat action badge, amongst other commendations. In 2016 he was awarded the State of Florida Citizen Life Saving Award. LTC David’s military education includes the Infantry Captain’s Career Course, Combined Arms Services and Staff School, Special Warfare Center & School, Resident Intermediate Level Education, Defense Strategy Course, Airborne School, Air Assault School, SERE-C High Risk, and Pathfinder School.

He frequently writes and publishes with pieces featured in Special Warfare Magazine, Foreign Policy, Real Clear Defense, Small Wars Journal, and War on the Rocks. He has won several writing awards and is a coauthor with Lt Gen (ret) Charles T. Cleveland, Dr Ben Jensen, and Dr Sue Bryant, of Military Strategy in the 21st Century: People, Connectivity, and Competition.

Is Covid-19 Crisis Giving Breathing Space to Naxalism in India?

Articles Vaibhav Kullashri - July 30, 2021
0
The Covid-19 pandemic has severely affected the world like never before. For the first time, the globalized world remains standstill. In the Indian context,...

Articles Mohak Gambhir - July 29, 2021
0
Druk-yul, as Bhutan is called in its national language, is a small Himalayan state clubbed between two rising global powers, India and China. While...