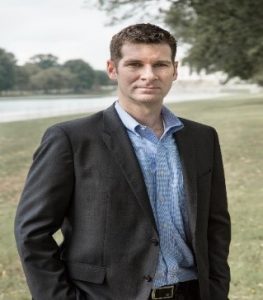 Peter Warren Singer, Strategist at New America, a Professor of Practice at Arizona State University, and Founder & Managing Partner at Useful Fiction LLC. A New York Times Bestselling author, described in the Wall Street Journal as “the premier futurist in the national-security environment,” Dr. Singer has been named by the Smithsonian as one of the nation’s 100 leading innovators, by Defense News as one of the 100 most influential people in defense issues, by Foreign Policy to their Top 100 Global Thinkers List, and as an official “Mad Scientist” for the U.S. Army’s Training and Doctrine Command.

Dr Singer has served as a consultant for the US Military, Intelligence Community, and FBI. He was coordinator of the Obama campaign’s defense policy task force, named to the US Military’s Transformation Advisory Group, NATO’s Innovation Advisory Board (for unmanned maritime systems), the NSA’s Advisory Board, and is an Associate with the US Air Force’s China Aerospace Studies Institute. In addition to his work on conflict issues, Singer was a member of the State Department’s Advisory Committee on International Communications and Information Policy and an advisor to IDS and Zignal.

Prior to his current position, Dr. Singer was the founding Director of the Center for 21st Century Security and Intelligence at the Brookings Institution. He was the youngest scholar named Senior Fellow in Brookings’ 102-year history. Prior to that, he was the founding Director of the Project on US Policy Towards the Islamic World, where he was the organizer of the US-Islamic World Forum, a global leaders conference. He has also worked for the Office of the Secretary of Defense, as a contributing editor at Popular Science, and at the Belfer Center for Science and International Affairs at Harvard. Dr. Singer received his Ph.D. in Government from Harvard and a BA from the School of Public and International Affairs at Princeton.