“The Indian Army’s prevailing doctrine leaves the military with two main choices: do nothing or risk wars it cannot win. The Indian Army needs to rethink its use of force to meet today’s new challenges.”[1]

The Indian Armed Forces are usually known to be land centric,   however,  with unsettled borders on the West and North, not many options are available for the forces with respect to casus belli in modern times. The foundational animosity with both putative adversaries is scaffolded on territorial dissonance inherited from a colonial past. Apropos, it is quite understandable that India has fought most of its wars on terra firma.

Much has been said about the Cold Start Strategy and its offspring-the Proactive Strategy (PAS)[2]─ which was the cornerstone of all operational planning and force articulation with respect to Pakistan and a derivative of OPERATION PARAKRAM. In hindsight, the efficacy of PAS, as a deterrent strategy in the sub-conventional domain, was adequate enough to ensure that no large scale terrorist attack[3] was prosecuted by Pakistan from 2001 to 2008.[4] The Mumbai terror attack on 26/11[5] burst the bubble of this strategic articulation where to Pakistan’s glee, despite extreme provocation, the Indian Armed Forces did not roll out of the garages and straight across the International Border in the manifestation of the oft-quoted, “HIT, MOBILISE and HIT HARDER”[6]. However, did this strategic paralysis since 2008 persist, and are Indian Armed Forces still looking for the lodestone which would pull the forces out of the morass. The answer to the question is a big NO.

Before we dwell into the new articulation for warfighting across the Western Borders, it may be prudent to place the construct of policy, strategy, and operational art in the correct context. A flow chart may explain the co-relation. 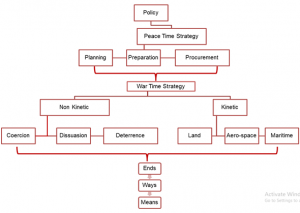 India’s articulation has been that of territorial orientation and sanctity of its own borders, being the schwerpunkt prima donna of all strategic hypotheses, hence the defensive orientation that affected the national policy and concomitantly the war time strategy. It all changed with the conduct of the Ex BRASS TACKS[7] which changed the intent on the Western Borders to punitive deterrence.

The armed forces have echoed the idea of war avoidance on the Northern Borders with dissuasive deterrence transitioning to credible deterrent capabilities. The contention that doctrinal innovations along the way, have sought to optimise rather than rethink the orthodox offensive doctrine may be incorrect. The strategic articulation has evolved with the capabilities and environmental realities of the geopolitical space in the sub-continent.

Pakistan’s responded to PAS by adopting a ‘new concept of warfighting’ (NCWF)[8] and further the enunciation of Triple R (Rearticulation-Reorganisation-Relocation) coupled with merging of the nuclear warfighting with conventional conflict, imposed a degree of caution and recalibration. Pakistan called India’s bluff on conventional conflict as a response to a sub-conventional attack and threatened a transition to the nuclear domain, thus curtailing the window of conventional conflict for India. This schema seems to have worked well for the intervening period of 2008 to 2016, where a large number of terrorist attacks were perpetrated by the “Deep State” against India and specifically so against the Indian Armed Forces─ Samba, Janglot, and Pathankot being some examples. However, the proverbial straw which broke the “camel’s back” was the terrorist attack on the Uri Military Base which led to the next level of evolution in tune with the strategic reality of upping the ante in the sub-conventional domain, while calling out Pakistan’s bluff to go nuclear in response to a kinetic conventional counter-response to a sub-conventional terrorist attack. While the response to Uri in form of surgical strikes may have looked like ‘an old wine in a new bottle’, it triggered evolutionary germination of an idea which took the form of flexible responses[9] and even before the ‘ink was dry’, it was executed as a response to Pulwama terror attacks.

Such flexible responses are premised on the capability of the Indian Armed Forces to wage a limited war under the nuclear overhang by offering the Chiefs of Staff Committee (COSC) and Cabinet Committee on Security (CCS) the choice of deviating from a preprogrammed conventional attack envisioned in the PAS; in other words, this response mechanism would allow India to ‘control and direct’ its armed forces in a crisis ‘as the military situation may dictate’, This schema permits escalation control and at the same time would exploit all vectors of the Comprehensive National Power (CNP) available, to help policymakers achieve geopolitical objectives without crossing the line into a full-scale conventional conflict or a nuclear confrontation. George Kennan lists a range of such options from negotiation to embargo to intimidation, covert subversion, assassination and the limited use of military force[10]. The failure of India’s policy to stem state-sponsored terror is linked to the emergence of two new paradigms of military force:-

(a) Force is  constant, and conflicts of all kinds are now inextricably linked to the civilian population

(b) There are no longer any rules involved in a  conflict and countries can stay in a state of perpetual conflict without declaring war.

India has indicated to the adversary, a lowered threshold of tolerance and intent to respond under the conventional overhang to target terrorists and their infrastructure with kinetic force. Similarly, this approach could entail integrating the use, or threat of use, of powerful non-conventional capabilities such as strategic cyber-attacks against Pakistan’s critical infrastructure for the same purpose of raising the costs more than that he would expect to pay for adhering to his proxy war strategy. Threatening to respond to Indian conventional aggression with nuclear weapons, whether tactical or strategic, might have been a fairly credible approach, but the new stratagem, in no manner, raises the nuclear bogey and such a response by Pakistan would tantamount to nuclear terrorism.

The evolution of the warfighting strategy might be explained with the help of the recent standoff at the Galwan Valley and the North Bank of Pangong Tso in Eastern Ladakh between two modern armies was bereft of all visages of technology and deteriorated to primal pre-historic warfare with PLA using clubs, stones, and batons. This descent from the high pedestal of “Informationised Battlefield” to slugfest has brought a new dimension to warfare and has created a strategic conundrum for the Indian Armed Forces. The “cut and dry hypothesis” against China for conventional conflict and transition from Border Management to a War-like scenario, has now been further nuanced with enough space being created for interposing levels on conflict along the escalatory ladder. This one-dimensional response to Chinese belligerence has now tested the Indian military planners and would need to be responded to. A veritable churning of ideas and processes is presently ensuing to ensure that military responses to conflagrations on LAC are prepared which cover the entire spectrum of conflict, keeping in mind the environmental realities of terrain, weather, and force differential with an adversary as key terms of reference. The synthesis of strategic policy needs and evolving characteristics of conflict with PLA projects a strong case for the development of a novel response mechanism for Northern Borders. The strategy must allow the employment of military force to better meet future challenges. The articulation must reduce the risk of full-scale intervention, permit intervention at a lower level of conflict, protect the will to intervene and achieve parity in effect, allow more rapid reconstitution of infrastructure and permit greater synergy of political, military, information, and economic tools. Restraints to the use of military force against a stronger adversary must be attenuated permitting a bolder, preemptive intervention strategy at a reduced risk and cost. For the uninformed, to castigate the military thinkers and planners, currently grappling with the volatility on both borders, is easy. It may be prudent to be give some leeway to the present generation who maybe just more intellectually stimulated than what is easy for the ‘have been’ to admit.

[4] https://economictimes.indiatimes.com/news/defence/six-terror-attacks-that-shook-india/1993-bombay-blasts/slideshow/74146291.cms accessed on 22 October 2020. The direct attribution to Pakistan in a terrorist attack was established in Parliament attack of 2001 and Mumbai attack of 2008. The Mumbai train blasts of 2006 were never credibly pinned on Pakistan.

[6]  Franz-Stefan Gady, Is the Indian Military Capable of Executing the Cold Start Doctrine? Published on 20 Jan 2019 https://thediplomat.com/2019/01/is-the-indian-military-capable-of-executing-the-cold-start-doctrine/ accessed on 13 Aug 2020.

Gaining Competitive Advantage While Securing the Country and its People : 5G Challenges for India