While geography has remained ever important, its significance is being greatly challenged and diminished by technology.  This march of technology has nearly negated the geographical barrier of the Himalayas between Nepal and China, thereby causing a rethink in Geo-politics of the region. Simply, in 2017, approximately 59 percent of Chinese imports to Nepal came through India-Nepal border, but then the remaining 41 percent came by air (to Kathmandu) and by land from Tibet.[1]  In fact there are more flights daily from Kathmandu to Tibet and China than to India.  Geopolitics of the land-locked Nepal has been greatly affected by what is noted in the Revenge of Geography by Robert Kaplan that the Himalayas have been flattened and no longer separate the two great civilizations – India and China, and the distance between China and Nepal stands defeated.  There is a newer strategic geography in the region, and the earliest India fathoms, the best, as the ‘trade routes linking China and India, by way of Tibet, Nepal, West Bengal, and Myanmar – joining Lhasa, Kathmandu, and Kolkata – will only further mature, with peaceful commerce.’[2]

The top priority of Nepal and its foreign policy orientation is a natural product of being land-locked and that it is located between two large neighbours with adversarial relations. It is oft stated, ‘Nepal is like yam between two giant boulders’.  In this Himalayan geopolitics, perspicacity and suppositions of the attitude of the two big neighbours would determine Nepal’s response to the environment. There are obvious concerns of security. Nepal has had a two-decade political instability. The Maobadi dwandakaal or the Maoist Insurgency lasted from 1996 to 2006.  The Nepalese Monarchy that existed for 240 years was abolished in 2008.  Ten Governments changed in one decade up to 2012. Following the democracy movement an Interim Constitution was promulgated in 2007. Two Constituent Assemblies worked to formulate the final Constitution that took nearly seven years. 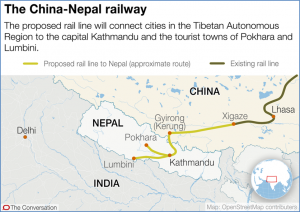 The recent visit of President Xi Jinping to Nepal, was preceded by the visits of Nepal PM to China in June 2018, and President of Nepal to attend the Second Belt and Road Initiative (BRI) Forum in Beijing on 27 April 2019. President Xi Jinping’s visit witnessed signing of 18 Memorandum of Understanding (MoU) and 2 Letters of Intent that elevated bilateral ties from comprehensive partnership of cooperation to a strategic partnership of cooperation.  China has also made deep inroads into Nepal, with major investments in infrastructure. The 72 km Kerung-Kathmandu railway corridor will get a detailed project report in the next two years. This rail link will finally connect Kerung to Lumbini. (Figure 1: Proposed China-Nepal Railway Line)

There are motorable roads from the Chinese border to Hilsa, Korala, Rasuwa, Kodari, and many more are being added.  Under the Protocol of Transit Transport Agreement with China with Nepal signed in Sep 2018, China has also agreed to let Nepal use Tianjin, Shenzhen, Lianyungang and Zhanjiang open seaports and Lanzhou, Lhasa and Xigatse dry ports for trading with third countries.[3] 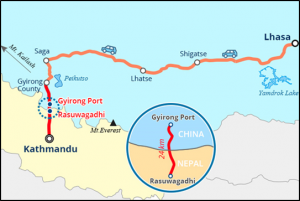 There was a commitment of US$ 500 million in the next two years for capacity development and uplifting basic living standards in Nepal. (Figure 2: Motorable Road between Lhasa and Kathmandu). The relationship between the two communist parties would be further strengthened as a fraternal relationship was established between the Communist Party of China (CCP) and Nepal Communist Party with the signing of six MoU. The Confucius Study Centres are bound to proliferate language training to Nepal.  The roads, the optical fibre network, the burgeoning trade and increasing people to people contact are pointers to a new geo-political architecture between China and Nepal.

India on her part always stands with the special, socio-cultural relationship with Nepal, the Hindu majority nation of the world, with a 1751km long open border with Indian five states. There are a very large number of Nepali workers in India, with no requirement of acquiring work permits (and vice versa).  Nepali citizens are free to acquire property in India (though vice versa is not allowed).  The Indian Army recruits from Nepal in the Gorkha Rifles, units which have exhibited great valour by their ferociousness and courage and have sacrificed in war and peace.  Their also exists a substantial Gorkha soldier veteran community drawing pensions from India.  The Gorkha veterans maintain very close bonds with the parent regiments. There are substantial financial remittances from the Nepali workers and soldiers to Nepal. Nepal being land-locked is allowed transit trade through twenty-two designated routes between India-Nepal border and the ports of Kolkata/Haldia and Vishakapatnam, in addition to Nepal’s trade with Bangladesh. Bilateral trade, as per official data, in the fiscal year 2017-18, India-Nepal was $8205 Million.

Despite this, Nepal and India relations are complex and had been inconsistent to say the least. The accusation of ‘big brotherliness’ or even ‘elder brotherliness’, the perceived unfair water treaties – Koshi, Gandaki and Mahakali, Indian objections to the major marker in Nepali politics – Nepal Constitution of 2015, and especially the four and a half month 2015-2016 blockade, rankle in the minds of the Government and the population.  There are also, though unfair, accusations of Indian support to Madeshis and Janjatis, who inhabit the plains bordering Indian States of Uttar Pradesh and Bihar. There is often stringent anti-India rhetoric, which challenges the sensibilities of the Indian establishment. Suffice it to say, an image of continual interference by India in internal, domestic affairs of Nepal has been created, and that India remains a factor in domestic politics of Nepal.  This is not to say that the historic linkages and the warm relationships, socio-cultural links that peoples of Nepal enjoy with India, stand degraded.  On the contrary, a strong pro-India constituency exists in Nepal.

These are certain trends that must be anticipated and accepted as ‘given’.  The geographic barrier of the Himalayan Mountains between Nepal and China is being changed by railways, roads and tunnels. In the battle between geography and technology, inevitably the Chinese technology and deep pockets will win.  Simultaneously the China and Myanmar Silk Road Economic Belt and the 21st Century Maritime Silk Road Initiative envisages a “Y-shaped” corridor connecting China’s Kunming to Mandalay and then extending east and west respectively to Yangon and Kyaukpyu. 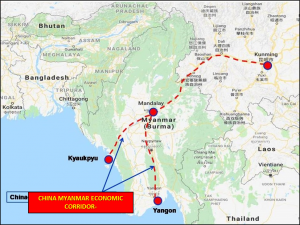 The Trans-Himalayan, Trans Tibet Economic Corridors will come into being, linking Nepal and Myanmar with China’s Yunnan, Sichuan and Gansu Provinces, and Tibet, and allow intensive trade and interaction. (Figure 3: Myanmar-China Economic Corridor)

As an aside, India, Thailand and Myanmar are also working on about 1,400km long highway that would link India with South East Asia by land and give a boost to trade. 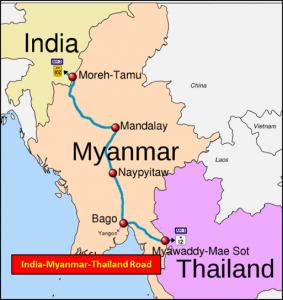 It is obvious that a new architecture is on the make; the signposts are already on the wall that China will continue to rise in importance in Nepal in multifaceted ways. And hence forth, when push comes to shove, Nepal will have the options to decide based on its own national interests, like any sovereign nation would do. (Figure 4: India-Myanmar-Thailand Highway)

A sharing of relationships with China is inevitable.  India has valid objections to the Belt and Road Initiative.  This must not deter improving connectivity with Nepal and China under the UN Sustainable Development Goal No 9 that lays down development of quality, reliable, sustainable and resilient infrastructure, including regional and transborder infrastructure.   In the era of ‘flattened Himalyas’ India must visualize taking due advantage and usage of trans-Nepal connectivity with China. Maybe India can expand its exports of bulk goods and raw materials to China through this newly emerging economic corridor.

India needs to envision the glaring future.  The infrastructure on Indian side of Nepal-India border needs urgent upgradation.  It includes upgrading approach highways to the border on the Indian side across Birgunj-Raxaul, Biratnagar-Jogbani, Bhairahawa-Sunauli and Nepalgunj-Rupediya to international standards. The newly inaugurated oil pipeline is an excellent step forward and should be extended further.  There is for upgrading and expanding of the road network in the Terai region, broad gauging and extending rail links to Nepal. In imagining the future, India will have to unlearn and re-fathom the national policies relating to Nepal, which is a sovereign nation, a friend, with lots in common.  It will be detrimental to our own interests if our policies are perceived to be inimical to Nepal.  Similarly, Nepal must ponder too on its stringency against India, and manage its domestic environment.  There are vividly apparent security issues in the background that India is mindful of at all times.  It’s for us to create a win-win situation from this inevitability of the future – and the situation is ripe to a total change of tack.

In sum, contextually if the nations look for it, the political and economic interests will converge, and may overshadow the underlying security theme of India–China relations, in furtherance of the Wuhan Spirit and Chennai Connect. Any wait and watch policy or a philosophy of procrastination may be to our disadvantage.  It is important for the future to strike a balance to ensure an effective China-Nepal-India relationship, which will determine the Himalayan geopolitics in decades to come.  For the future generations, the THREE MUST LEARN TO JIVE together!