Given the porosity along the Northeast (NE) border, drug trafficking is likely to be a huge matter of concern in the coming years. For instance, on 17 June 2021, the Assam police at Karbi Anglong district arrested Th. Paone aka the ‘queen’ of the drug empire [[i]]. The arrest of Th. Paone is not a new trend as there are many more like her who deals with illicit trades and drug trafficking since the NE region is close to the Golden Triangle, along the Myanmar border. In the year 2021, Assam alone has witnessed a 65 per cent increase in the number of drug-related arrests by the Assam police as compared to 2020 [[ii]].

There has been an increasing trend of drug smuggling and illicit activities carried out at the border, attracting the centre of attention to highlight two important issues.  First is related to the involvement of locals in illicit trade; and youth and their addiction to drugs. The second issue is related to the implications of illicit trade at borders to India’s Act East Policy (AEP). Many experts have apprehension about the success of AEP not because of lack of connectivity, but because of close proximity with Myanmar with a porous border. In this vein, some of the important questions are: 1) Is illegal trade and drug trafficking at the border an internal security challenge for India? 2) How can the increasing trend of illegal trade affect India from bearing a fruitful AEP?

Among the seven Northeastern states plus Sikkim, states like Arunachal Pradesh, Manipur, Mizoram and Nagaland share an international border with Myanmar. Since, there is no strict fencing across the Indo-Myanmar Border (IMB), cross border crimes are frequent in these states. This has resulted in the free flow of many items through illegal trade including drugs, illegal immigration, tax evasion and supply of contraband [[iii]]. Additionally, the Free Movement Regime (FMR) between India and Myanmar has again facilitated such activities across the border. According to FMR, people who are living on both sides of the border are allowed to move freely within 16 km from the border without any restrictions including visa. Furthermore, insurgents, criminal gangs and drug lords to carry out illegal trade including Chinese products and smuggling of drugs often misuse FMR. Some of the common drugs smuggled from Myanmar and imported to the northeast are opium, heroin, and methamphetamine and so on. These drugs are coming from Bhamo, Lashio and Mandalay from Myanmar and entering through Moreh in Manipur and Champhai in Mizoram [[iv]]. The diagram in figure 1 shows the nucleus of drug trafficking in northeast India [[v]]. 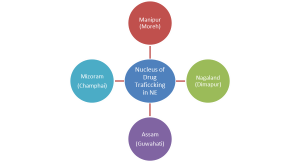 Therefore, the region remains a trouble hotspot and fragile. On top of this, arms and ammunition are smuggled through the IMB. Narcotic drugs from Myanmar enters India through Mizoram, Nagaland and Manipur and is then en-routed to Assam and distributed to different drug lords in other parts of the country.

In addition, drug mafias from parts of India use remote places such as NE region for opium cultivation. Some of these mafias sponsor opium cultivation in remote places in Manipur and Arunachal Pradesh. Several of them from Bihar and Uttar Pradesh have already started such illegal cultivation in few districts of Assam like Barpeta, South Salmara and Kamrup [[vii]]. Assam becomes a transit point of receiving the narcotic substances from the neighbouring states and distributing it to other parts of India. Thus, Assam has the highest number of cases registered on drug trafficking in all NE states as highlighted in Table no 1.

In India, alcohol is the most commonly consumed psychoactive substance by the masses. Next to alcohol is Cannabis (legal form: bhang and illegal form: ganja and charas) and Opioids (opium, Heroin and other pharmaceutical Opioids). The former is used widely in states like Uttar Pradesh, Punjab, Sikkim, Chhattisgarh and Delhi and the latter in Sikkim, Arunachal Pradesh, Nagaland, Manipur and Mizoram. Heroin is the most used Opioids nationwide and people in the NE region mostly use the Opioid at a large scale (Table 2).

Table 2: Current use of Opioids

Source: ‘Magnitude of Substance Use in India’ 2019, Ministry of Social Justice and Empowerment, Government of India, https://socialjustice.nic.in/writereaddata/UploadFile/Magnitude_Substance_Use_India_REPORT.pdf [[ix]]

Again, the above table shows that people in the border area use more Opioids substances than those who are not in the border area. Opioids which include heroin are mainly coming from Myanmar. That is why, most of the states bordering Myanmar share porous borders are easy to carry out drug trafficking and other related illicit activities, which is shown in figure 2. 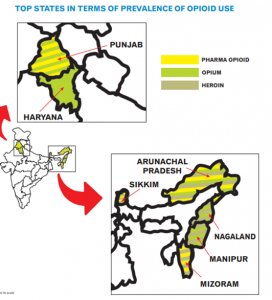 Source: ‘Magnitude of Substance Use in India’ 2019, Ministry of Social Justice and Empowerment, Government of India, https://socialjustice.nic.in/writereaddata/UploadFile/Magnitude_Substance_Use_India_REPORT.pdf [[x]]

Population residing at the border area are vulnerable and neglected and thus get involved in illicit trade and illegal activities. The following are a few reasons: First, they are economically poor and they do not have other sources. Carrying drugs and reaching the drug mafias becomes the lifeline of the locals for their survival, which is the easiest way to earn money. Secondly, they do not have job opportunities in the region due to lack of education and other unavailable options and hence, youngsters get involved in such illicit activities. Thirdly, criminals and drug lords acknowledge the poor socio-economic condition of the people and hence, they manipulate the minds of people to join such illegal activities to extract easy money out of this. Lastly, the insurgents use the porous borders to carry out illegal activities including smuggling of drugs to fund themselves and to buy arms and ammunition to keep their mission alive. In this regard, the NE region becomes a hotbed for drugs and other illicit activities that might spoil young minds. There is no doubt the region is becoming a nucleus of drug trafficking and thus pose a serious threat to India’s internal security.

The use of Opioids and the trend of usage of intravenous drugs among the younger generation especially between 15 and 20 years are prominent, which might further accelerate HIV cases in the NE region of India. Currently, India faces an alarming situation due to the increasing number of drug users imported from the Golden Triangle and Golden Crescent. In 2020, the National AIDS Control Organization (NACO) reported that the AIDS-related mortality per 100,000 population in India was the highest in Manipur with 36.86 per cent followed by Mizoram (28.34 per cent) and Nagaland (26.20 per cent) [[xi]].

Preventive measures are required to regulate the porous border in the NE region. Otherwise, the number of drug traffickers will be mounting and gradually it will be spreading to other parts of India. India needs to pay special attention, especially to the IMB because Myanmar contributes 95 per cent of the total opium production in the golden triangle, which supplies 80 per cent of heroin production in Southeast Asia and 60 per cent to the world, as reported by the US Drug Enforcement Administration[xii]. That is how the criminal, drug lords and insurgent groups build their nexus of black market and smuggling of drugs through this channel, affecting the morale of the people of NE region and ruin the spirits of the youth in near future.

Some of the important recommendations are as follows:

The problem of drug smuggling and illicit activities in the NE region needs to be given special attention. The region is the fulcrum of AEP if not regulated on time could have negative implications such as the potential development of the golden triangle in NE. Relations should be developed with the Myanmar government to step up immediate actions to stop such illicit trade at the border. Given the predominantly youthful demographic character of India, the young generation is regarded as national assets in the country which will fare demographic dividend in the near future. Addiction to drugs not only harms the cerebral hemisphere of an individual but dents the economic and social prospects of a nation. Therefore, India needs to keep a check on its youth getting addicted to such drugs. As this might pose a serious threat to India’s internal security in near future.

[2] ‘Go to Hills 2.0’ is launched by N. Biren Singh, Chief Minister of Manipur on 6 September 2021 to avail benefits of various welfare schemes at the doorsteps to the people in remote places.

[ix] Magnitude of Substance Use in India’ 2019, Ministry of Social Justice and Empowerment, Government of India, Available at https://socialjustice.nic.in/writereaddata/UploadFile/Magnitude_Substance_Use_India_REPORT.pdf, accessed on 15 November 2021