The world has been witnessing embargos on energy producing nations over the last year or so. Developing nations who are dependent on energy sources are worst hit. The first among the embargo series was on Qatar in 2017[[i]], then on Iran in 2018[[ii]] and now on Venezuela in early 2019[[iii]]. India, being a major consumer of oil and its products, has to seize the opportunities vis-a-vis maintain its diplomatic stature. The global shifts in prices and supply cuts are significant to the Indian economy. However, India’s approach in its energy policies would be leaning towards its extended neighbourhood over other diplomatic repercussions.

The United States (US) sanctions on Qatar in 2017 and then on Iran in 2018 can be considered as strategic moves to restrain their growing stature. Saudi Arabia and Qatar are not in cordial terms and the former being an ally of US took the opportunity to restrict the world’s largest natural gas producer with sanctions. Apparently, the sanctions on Qatar did not affect much internally or externally. The exit of Qatar from Organisation of the Petroleum Exporting Countries (OPEC) [[iv]] earlier this year is not surprising as it exports more natural gas over oil. However, many nations including India extended support to Qatar as a substantial number of Indians work in the geographically small nation [[v]].

In the case of sanctions on Iran, India got a waiver [[vi]] for purchase of oil from the Islamic Republic. However, this can be noticed as a strategic shuffle from US with its loosening of hold in Afghanistan; India’s closeness to both Iran and Afghanistan is crucial to this context. Moreover, it is assessed that the recent sanctions on Venezuela would not have considerable effect on India as it imports just 1.5 percent of the country’s total import [[vii]].  According to a report of International Energy Agency, India’s oil demand has grown five percent in 2018 than in 2017[[viii]]. This automatically proves that as an economic partner India would be willing to purchase more oil from Venezuela in cheaper rates – benefitting both sides. 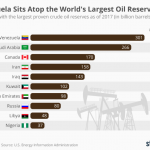 In the last two years there has been a supply crunch in the oil sector along with a price hike. The prices have been fluctuating from ¬40 USD in 2016 to ¬70 USD per barrel in the last few years[[ix]].The trends in oil price fluctuation in the global economy have brought fears of a slow economic growth across economies; signs of a sharper decline in the global growth rate. Interestingly, the global production had reached 100 million barrels per dollar (mbd) during the last quarter of 2018[Fig 2].

The Venezuelan economy is highly dependent on its oil exports as it earns 98 percent revenue [[x]] from this, as per the OPEC website. Due to unfavourable political recourse for US in the latin American nation [[xi]], the Trump administration opted for a harsh step with sanctions. Apparently, all transactions of trade between US and Venezuela have been through the US based institutions [[xii]] which would badly affect the former’s domestic economy in the coming quarter but might not hit the consumers as much as projected. But there is a high possibility that the sanctions might revert back into the American economy; US imports around 41 percent [[xiii]] of Venezuelan oil. This might also slow down the economy as supply crunch to refineries and price rise might lead to high levels of inflation in the country. 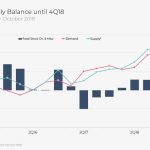 Despite the sanctions, Venezuelan oil has huge market in China and India. It is noted that Caracas is on loan with Beijing [[xiv]] and would not benefit by exporting more to China. So the next best option is India as it is one of the largest consumer of oil and deals directly in cash based transactions [[xv]]. The Fig 3 depicts a sharp dip in the supply oil from Venezuela over the years. This indeed has destabilised the OPEC member’s economy in the last few years.

What will India gain from Venezuela?

India‘s share of import from Venezuela, which is predominantly oil, in 2018 was just 1.5 percent of the country’s total imports [[xvi]]. India is Venezuela’s third largest market for oil after US and China [[xvii]] as of a 2017 data. India is important to the OPEC member as import transactions are done in direct cash method and would benefit the economically directly. The economic vulnerability of Venezuelan economy demonstrates an instant necessity to sell off the excess produce and to pump cash into their economy. The situation has forced Venezuela to request India to purchase more oil from them as the US sanctions have affected them very badly. However, India agreed to the increase imports vis-a-vis it had already increased the value of exports last year than the previous year (Table 1).

More imports from Venezuela in cheaper prices in this relatively slow growing period of the global economy would be a boon for the Indian sub-continent. It is also noted that the Venezuelan government is also interested to use barter system for the trade with India [[xviii]]. Traditionally, India’s closeness to Latin America region is limited. India’s share of import from the region in 2017 was 4.45 percent while it was 4.17 percent in 2018 as per the Export Import Bank Data, Department of Commerce- Government of India [[xix]]. From Table 1, it is evident that Indian imports from Venezuela is limited comparatively and are mostly focused on oil and petroleum.

Table 1. Value of Imports from Venezuela (in Rupees crore)

Source: Department of Commerce, Ministry of Commerce and Industry, Government of India

The recent visit of the Venezuelan Oil Minister, Manual Quevedo, to New Delhi during mid February was also to talk on “double” the oil imports from Venezuela [[xx]] as historically India has been the second largest cash paying consumer bilaterally. Quoting Manual, “We are selling more than 300,000 bpd to Indian buyers. We want to Double it”[[xxi]]. India in an average used to import 340,000 bpd before the sanctions vis-a-vis US more than 500,000 bpd from Venezuela [[xxii]].

In the wake of sanctions, it is ascertained that the latin American nation has to keep its economy ticking; the inflow of cash into the economy is critical considering the status quo. However, they are also willing for other systems for transactions with India including barter system. It is interesting that India’s positive response in spite of the US pressure represents the south Asian nation’s interest in the region which traditionally was very limited. According to US Energy Information Administration, Venezuela tops the chart of crude oil reserves with 18 percent in its account as of 2017 (Fig 3).

Moreover, India’s oil requirements are dealt through imports from its extended neighbours, who are also in the same list. Saudi Arabia, Iran and Iraq are India’s top oil importers [[xxiii]]- jointly constitute approximately double that of Venezuela’s reserves. Additionally, India has keen relations with these nations culturally which naturally links them economically. India’s current consideration of Venezuela is just in commercial terms – as an ardent consumer of oil vis-a-vis to showcase that India has a crucial role to play in the global economy. Perhaps, it is time that India prioritises to resolve its energy security conundrums while framing its policies.