On 05 August 2019, India initiated important steps to administratively reorganise the state of Jammu and Kashmir by abrogating Articles 370 & 35A of the Indian Constitution. The state was thereafter reorganised into two Union Territories―UTs of J&K and Ladakh. Pakistan, over the years, has propagated half-truths/ disinformation over J&K and has generated fake and mischievous narratives, containing factually incorrect information. The aim of this article is to establish a fact-based narrative to counter fabricated accounts, which are being sold with malign intent, and to dissuade such narrative based on falsehood.

J&K has a geographical area of 222,333 Sq kms, approximately 6.43% of the total Indian Territory. Leaving aside the areas under illegal occupation of Pakistan & China, the UT of J&K has an area of 101,387 Sq kms, which has been demarcated into 20 districts, (10 each in Jammu and Kashmir divisions) and 02 districts each in  UT of Ladakh.

Demographically, J&K is fairly diverse ―while the Kashmir Valley is predominantly Sunni Muslim, Jammu has a majority Hindu population. UT of Ladakh has a significant mix of Shia Muslim & Buddhist populations. However, the exodus of Kashmiri Pandits from 1990 onwards from Kashmir Valley at the behest of Pakistan has impacted the demographic profile of the region.

Despite years of violence engineered by external actors, J&K has sustained a good literacy rate and has a sizeable chunk of the population of youth, which is increasingly gravitating towards the Urban Areas 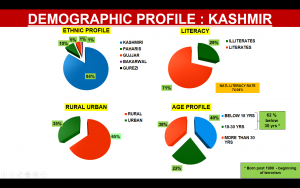 A glance at the history of India is clearly indicative of the fact that Kashmir has always been an integral part of India. It has actually been an abode for the Sages and Rishis since the Vedic period. In recent times, the area has been ruled by various dynasties. This have had a profound impact on social, cultural and religious evolution of the state. Kashmir’s cultural heritage amalgamated the Hindus, Buddhist, Sikh and  Muslim philosophies, which created a composite culture based on the values of humanism and tolerance– commonly referred to as ‘Kashmiriyat’. 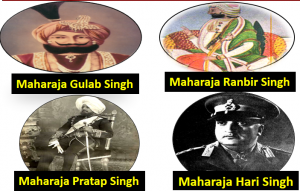 It is pertinent to mention that Maharaja  Hari Singh was the ruler when India gained independence and he later signed the Instrument of Accession. Kashmir was microcosm of everything which India signifies – Unity in Diversity. On the eve of independence, Pakistan was confident that the state of J&K would automatically accede to it. However, when it did not see that happening, therefore it grew impatient & decided to annex it by force.

Under the British rule, India was divided into two categories― first category comprised of various provinces which were directly placed under the Viceroy (constituting 60% of India), and the other category consisted of provinces ruled by the Maharajas. For these princely states, the Crown looked after the defence, foreign affairs and communications. In this context, it is worth mentioning that the ‘two Nation theory, based on religion, and as espoused by Pakistan, envisaged only the division of those states, which formed part of the first category of provinces’. In so far as the princely states are concerned, in July 1947, the Viceroy advised the rulers of these provincial states to join India, or Pakistan (once it gets ‘created’– the word created needs to be emphasised, as Pakistan did not exist before this day). On 12 August 1947, most of the states signed the Instrument of Accession less princely state of J&K, which sought a Standstill Agreement till the ruler made up his mind, and Pakistan was created on 14 August 1947.

However, few days post its creation, Pakistan started applying pressure on the State of J&K to accede to it and employed a ‘coercive strategy of economic blockade’and warned the regent of the state of dire consequences. Not having succeeded in its efforts, Pakistan infiltrated tribals from its forward areas under the leadership of Pakistani Military Officers. Though, the people of J&K resisted the invasion, however, they were no match to the invading force that is the Pakistan Army regulars who had modern weapons. 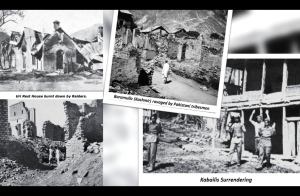 The UN Resolution No 47 (1948) never contested the accession of the Princely state of J&K to India. The resolution only spoke of three issues, all of which were conditional and sequential. The first necessary condition was the ‘absolute & unqualified withdrawal of the Pakistani troops and tribals from the area’. On satisfactory confirmation of the fulfilment of first condition by the UN, the ‘Indian troops were to withdraw leaving sufficient elements as necessary to maintain security of the state’. Only on having fulfilled these conditions, the state was to hold a  Plebiscite. UN Resolution did not recognise or grant any role to Pakistan in the conduct of Plebiscite. 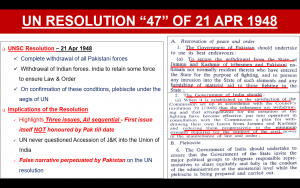 The moot point in this context is that given the simplicity of the resolution and Pakistan’s misplaced notion of two nation theory, ‘Pakistan has not fulfilled the first essential condition of the Resolution till date. This self-inflicted wound in the form of a ‘convoluted, contrived and cultivated storyline’ on the UN resolution, exposes the deceit perpetuated by Pakistani decision makers since its creation, and is now an albatross around the Pakistani neck. In any case, in the present context, the resolution has changed and all the issues between India and Pakistan are to be dealt bilaterally in spirit of Shimla Agreement of 1972.

Attempts by Pakistan to Alter the Status of PoJK

For a country that has relentlessly tried to challenge India on Kashmir, Pakistan has no credibility and moral authority to do so. Pakistan bifurcated the territory under its occupation in 1949 itself, through the Kashmir Agreement, and brought areas of Gilgit and  Baltistan, which forms 85% of the occupied territory, under its direct control. Even as the area remained under illegal occupation of Pakistan, however, it illegally ceded 5180 Sq kms of territory of the Gilgit & Baltistan region in PoJK to China.

Pakistan was also extremely cautious to not let any rights flow into the hands of Kashmiri’s. Until 1961, PoJK was governed directly from Islamabad. Then it sought to introduce a half-baked Presidential System, which did not work. In 1974, the then National Assembly of Pakistan passed a legislation to adopt a Parliamentary System. However, the real power rested with a 13-member apex PoJK Council chaired by the Pakistan PM. Pakistan could nominate six members to the Council. The Chairman, along with these six nominees, makes  the Government of Pakistan a majority stakeholder in the council.

Pakistan, over a period to time, created new ‘Rules of Businessand  Ministries’, thereby vesting powers related to PoJK with the Government of Pakistan. In 1974, it abolished what was called ‘State Subject Rule’ in the Northern Areas, thereby allowing Pakistanis to reside, and own properties in the region. It was not until 1994 that some Fundamental Rights came into place in Northern Areas. Thereafter, in 2018, the Government of Pakistan promulgated the Gilgit – Baltistan (GB) Order 2018, which gave GB Council headed by Pakistan PM overriding powers in Legislative, Executive and Judicial domains, whereas people of Gilgit-Baltistan do not have any representation in Pakistan’s Federal Legislative. The Pakistan PM, thus, has the authority to overrule any law passed by the Gilgit-Baltistan Assembly.

For the so-called self-determination of “Azad Jammu & Kashmir” (AJK), the Pakistan Constitution clearly states that – “No person or political party in AJK shall be permitted to propagate against, or take part in activities prejudicial or detrimental to the ideology of the state’s accession to Pakistan”. It was only in 2018 that PoJK Assembly managed to amend the 1974 order to ensure that their residents were granted someFundamental Rights that were enjoyed by Pakistan citizen.

Pakistan has displaced nearly 100,000 locals from Mirpur by constructing Mangla Dam on Jhelum, which services Pakistan Punjab. Clearly, all that Pakistan has tried to do over the last 74 years is, control Kashmiris by suppressing their voices, and selling off or ceding Kashmiri territory, to its ‘all-weather ally’ China.

Geographic as well as historical facts, when viewed in right perspective, emphatically establish that J&K is an inseparable part of India demographically, culturally as well as legally. It is also amply evident that Pakistan with its malign aspiration of ceding J&K with itself has adopted lies, falsehood, propaganda, hatred, terror and violence, as strategic tools to further its own interests. It continues to make all the attempts to alter the narrative in its favour without respecting the historical facts.