Kashmir’s economy is multifaceted by the fact that it has contributions from a variety of sectors. The region has witnessed violent conflict for over 3 decades now, its geography is unfavourable and politics even more convoluted. Since Kashmir’s economy is export-driven and import-dependent, the turmoil disrupted the supply chain and had a negative influence on whatever economic activity was present, with politics and political discourse taking centre stage. This article tries to understand the ground realities economically, with an emphasis on the last five years.

While earlier lockdowns and hartals could impact the economy only to a small extent because of them being localized in nature, the lockdown imposed in the wake of the removal of special status and later due to pandemic had a severe and irreversible impact on the economy of Kashmir valley. In earlier lockdowns, household production activities like handicrafts and horticulture would continue to some extent. The goods produced could be transported out of Kashmir to the rest of the country and outside. However, the lockdown imposed post-August 5 was the strictest the region had witnessed in decades While the production activity continued, the value of produced goods could not be realised in the market.

The major contribution to the region’s economy comes from exports, a substantial part of that comes from agriculture and allied activities, which are partially taxed. So, it doesn’t have a robust tax base and results in dependence on the Centre for funds. The argument that the region’s economy is dependent on the Centre, however, has to be understood in context. The erstwhile state was given the Special Category State status because the region is situated in mountainous and difficult terrain and strategically situated along the borders of neighbouring countries. In the larger political economy perspective, there is a fostered dependence, which over the years has become a part of the system. As a result, the regional government was not obliged to raise resources to fund itself. This could be to keep the regional government in control.

Jammu and Kashmir have a population of roughly 1.25 crore people. Following are the five major sectors contributing to the region’s economy: agriculture and horticulture, tourism, handicrafts, industries and government jobs. About  65 to 70 per cent of Kashmir’s population is supported by agriculture and horticulture. Although the service sector contributes around 50% to the Union Territory’s GDP, this sector employs a significant proportion of the population.[1] The second sector is tourism, which varies but on average employs about a million people. The third is handicrafts, or the artisanal sector, which employs around 1 million people. The handicraft sector plays an important role in the state’s economic structure, and its high-quality craftsmanship, appealing designs, and functional utility have earned it international renown. Fourth is the industry sector, which is in its early stages of development. About 5 lakh people are employed by the government.[2] Apples and shawls were two goods that helped the economy withstand the militancy.  Below is a detailed account of the major sectors.

The economy of Kashmir valley is predominantly agricultural, with over 70% population depending on it and allied activities. Within the agriculture sector, it is the horticulture sector that has gained prominence. Estimates suggest that the annual turnover of this sector is over Rs. 9,000 crores. The horticultural industry is crucial to Kashmir’s economy, employing 700,000 households or 3.5 million people directly or indirectly.[3] The Valley is the Country’s largest apple grower. The Shopian district is known as the Country’s apple bowl, with apple orchards covering 21,676 hectares.[4] Employment generation in the horticulture sector or the apple industry has different tires viz., horticulturists, packing industry, the cold storage industry and the transport industry.  In an interview with the Hindu in January 2018, the then Minister of Horticulture of J&K, Syed Basharat Bukhari, had said that this sector is a key job creator. “An apple orchard produces over 400 man-days per hectare. The Valley produces 20.75 LMTs of fresh fruit and 2.80 LMTs of dry fruit, accounting for roughly 8% of the state’s Gross Domestic Product”, Bukhari said.[5]

The apple industry is very sensitive to logistical disturbances because it is perishable and therefore is directly defined by a certainty, lockdowns,  curfews and a delay in transporting the produce to Delhi or Punjab or any other place may cost whatever profit a horticulturist could make. As per the state economic survey 2018, about 40% of farmland is dependent on rain for irrigation. As a result, producers are increasingly vulnerable to weather extremes, which experts attribute to climate change.[6]

For the past two years, this sector has been under tremendous pressure. Post 5 August 2019, the UT had to go through restrictions and curfews for a few months, which was followed by the Covid pandemic. What added further to the woes was Scab, a fungal disease, that invaded the apple orchards in 2020, rendering two-third of the crop unfit for market.

Saffron is grown in three districts of  Kashmir: Pulwama, Budgam, and Srinagar. Pampore in Pulwama has been crowned with the “saffron town” title since it produces the most and best quality saffron in the region. About 30,000 families in Pampore are associated with saffron cultivation.[7] According to the 2011 census, roughly half of the workforce in the saffron farming sector is made up of women. Saffron productivity in the valley has been rapidly declining due to climate change, insufficient irrigation, and imports of the cheaper Iranian saffron.[8] According to the Department of Agriculture Kashmir, the production of Kashmiri saffron has decreased by 65 per cent in the last two decades, from 16 metric tonnes to 5.6 metric tonnes.[9]

Tourism is another vital component of Kashmir’s economy, accounting for 8% of UT’s total GDP. According to industry estimates, this sector employs approximately 100,000 people directly and indirectly.[10] But this sector is very sensitive to the political situation in the Union Territory. The erstwhile state received 1,299,112 (1.29 million) tourists in 2016.[11] But as per Govt. records, numbers have been declining since, beginning with the long chain of violence following the killing of Burhan Wani. In February this year, the Govt. acknowledged in the Parliament that post-removal of special status, tourism has been on the decline and only 84000 tourists have visited Kashmir valley since August 5, 2019.”The impact was felt more severely in Kashmir valley than in Jammu division,” Union Tourism Minister Prahlad Patel told the Rajya Sabha.[12] However, post the second wave of covid the industry has made recovery. According to officials, the months of July and August saw over 1 lakh visitors.[13] 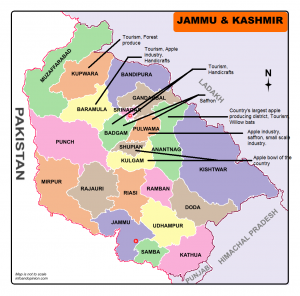 This sector has the potential to be an example of long-term economic sustainability. The valley has traditionally been a cultural economy with a significant craft sector at its heart that is socially organized, materially produced, and developed sustainably. The handicraft sector plays an important role in UT’s economic structure, and its high-quality craftsmanship, appealing designs, and functional utility have earned it international renown. It requires cooperation amid disturbance, technology and innovation. The cultural identity of Kashmir is defined by its arts and crafts industry.  According to estimates, the yearly turnover of Kashmiri handicrafts is more than Rs.2,000 crores.

Handloom is the state’s oldest and most widely practised industry, and it has been a way of life in the state since time immemorial. This is the largest unorganized sector in the UT and mostly employs craftswomen. The handloom specializes in the production of materials such as pashmina shawls, ruffle shawls, shahtoosh shawls, silk sarees etc. Because policymakers are enthralled by industrial jobs, no one has kept track of the artisanal economy’s job creation.

As per records from the Department of Handloom, Govt. of Jammu and Kashmir in 2007, one lakh women were officially registered as spinners, and an estimated five lakh women worked from home. However, in 2021 only 15,360 active women spinners were registered with the department.[14] In Kashmir, the number of women involved in hand-spinning yarn for Pashmina shawls has decreased substantially over time. The traditional weaving techniques are rapidly vanishing. Women who used to spin the finest yarns in the world have been driven out by low pay and automation. However, In response to this tendency, Kashmir’s Directorate of Handicrafts and Handloom has recently announced a Minimum Support Price (MSP) for GI-certified hand-made Pashmina shawls to “preserve existing techniques”.[15]

MSMEs (Micro, Small & Medium Enterprises) dominate UT’s industrial sector, and they play a critical role in driving industrial growth and the economy in the state, contributing 8% of UT’s GDP and employing the highest number of people in the manufacturing and services sectors. [16] Approximately 25,000 MSMEs operating in the UT account for nearly 60% of total investment and 90% of total employment in the UT’s industrial sector.[15] J&K SIDCO (Jammu & Kashmir State Industrial Development Corporation) is the state’s nodal body for the promotion and development of small, medium, and large businesses.

Before 2019, around 22000 persons were employed in about 500 IT firms in Kashmir. [17] Rangreth, in the Budgam district, on the outskirts of Srinagar, is home to the region’s largest information technology (IT) centre. The Jammu and Kashmir government recently announced plans to build a huge IT hub with a built-up area of 2 million square feet in order to boost the Information Technology sector. According to J&K’s IT policy 2020, the government would create a world-class IT park near the airport, national highways, rail terminals, and institutes of higher professional education in order to attract investment to the UT.

Since the internet is oxygen for the IT sector which is often suspended, this sector always remains at risk. Although the government has announced incentives for this sector,  its future still looks grim with many of its facilities currently unusable.

Although positioned at a very strategic location, Jammu and Kashmir have not been able to take advantage of their geography. Post-1947, the region has lost traditional routes linking it to several central Asian countries, providing ample prospects for expansion and development. Kashmir can become a gateway to Central Asia, and it has the potential to turn the region into an economic and trading hub of Asia.

The tourism sector has a lot of potentials. Kashmir is a brand for tourism but has not been able to leverage this brand due to the system’s inability to move beyond Pahalgam and Gulmarg, which are probably the only known places in India or outside the country. Many places remain unexplored due to infrastructural challenges at these uncharted locations.

There is huge scope for investment in the industrial sector. But, the Government has a bottleneck of resources. It must be opened up. This sector could be opened for Public-Private partnership so that requisite infrastructure comes up. But because of the volatile atmosphere and fragile political situation, the region continues to be a high-risk investment destination. Although some investors such as the Tatas, ITC, the Radisson Group and the Four Seasons, have invested their scope has remained limited only to the hotel industry.

The first variable for economic growth is stability viz. political and institutional stability. If one looks at how Kashmir’s economy has done in the last 20 years, one realises that the only periods of growth in the region’s economy have been when there was reasonable political certainty and stability and a decline in violence.

The bottom line is peace. Peace has to be ensured by people who are going to benefit out of it. People of the region should contribute towards strengthening and consolidating peace. It is the responsibility of the Central and UT governments to address all the issues that affect peace; eventually, prosperity follows peace.

[7] Government intervention has failed to arrest the decline of saffron cultivation in Kashmir. (n.d.). https://scroll.in/article/977579/government-intervention-has-failed-to-arrest-the-decline-of-saffron-cultivation-in-kashmir. Accessed on 18th September 2021.

[13] Ashiq, P. (n.d.). Tourism during pandemic: “What better than Kashmir if you can’t go to Europe?” https://www.thehindu.com/news/national/other-states/tourism-during-pandemic-what-better-than-kashmir-if-you-cant-go-to-europe/article36344007.ece. Accessed on 04th August 2021.

China’s Military Diplomacy in New Era and Implications for India