The Ministry of Home Affairs released its Annual Report for 2018-19 last month. The overall decline in the number of incidents of Maoist violence for the ninth consecutive year depicted an improving picture of India’s Internal Security situations. An overall drop of 8.3 per cent was recorded in the incidents of violence since last year with the number of casualties dropping by over 8.7 per cent. The positive developments in various welfare projects, including the Road Requirement Project, installation of Mobile Towers enhancing connectivity, as well as operationalisation of new schools in affected districts, seemed further encouraging. All this considered, a closer reading of the same report also trigger some very pertinent questions that might be of concern for the concerned authorities.

In fact, the decadal trend from the figure shows that the number of incidents has roughly oscillated between the 300-500 brackets in Chhattisgarh, with no steep decline, as opposed to the national trend. This trend could be deciphered in different deductions. One, that Maoist-influence in Chhattisgarh continues to present a challenging threat despite an overall national crackdown. Two, apart from testifying the continued stronghold of the Maoists, in a contrary view, the surging clashes also hint towards the extremists’ desperation for visibility in the event of a national crackdown. 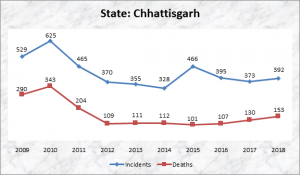 The same report also points out that of all the seized explosives in the same year, only 0.1 per cent could be seized from the Naxals and insurgents combined. Provided that the Naxals use IEDs as their major instrument for carrying out violent attacks, such a limited seizure raises obvious questions. In a conversation with this author on this subject, a scholar mentioned that this is not even the “tip of the iceberg” of explosives that the Maoists own. It must not be forgotten in this context that most of the recent incidents in the past one year primarily involved the use of IEDs.

Slowed Infrastructural Progress: 2017-18 Vs 2018-19
Regarding the Road Requirement Project, while an appreciable construction of 650 km of roads was undertaken in 2017-18, only 255 km of roads got constructed in 2018-19 (dip by 60.8 per cent). This slowed construction of roads with the project currently over 630 km short of achieving its target of 5422 km stands unanswered. Similarly, while over 1164 towers were installed in 2017-18, the reasons for the installation of only 6 the following year are worth examination. Over 2335 Mobile Towers have been operationalised so far as part of Phase I of the Project. The Phase II envisages the installation of 4072 towers. 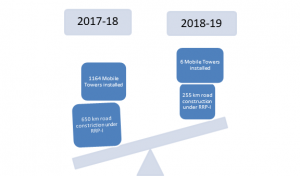 Welcome Steps: Welfare Schemes and SF’s Capability Enhancement
As welcome steps, the operationisation of new schools in affected areas was a primary development. A total of seven new Kendriya Vidyalas along with six new Jawahar Navaodaya Vidyalayas in worst affected districts, including in Gadchiroli (Maharashtra) and Kondagaon (Chhattisgarh) came up since last year. Capability enhancement of the Security Forces including the Central Armed Police Forces and State Police Forces through better intelligence sharing, fortification of Police Stations, and inter-state coordination continued.
Another very important development involved the diversion of forest land for development of infrastructure under the “14 specified categories” this year. It has been extended up to 40 hectares from 5 hectares, which may impact the local situations in a manner that would require a deeper analysis. The implementation and local acceptance of this development shall be a thing deserving constant observance.
Overall, the LWE-presence has been contracting and developmental infrastructure is gradually being put in place. Intelligence sharing has improved the SF activities on ground, and improving inter-state coordination is benefiting the crackdown. Initiatives regarding encouraging the local languages among SFs by local administration among other progressive steps helped improve communication with the local population. Amidst all of this, the only issue of concern comes from the interiors of Chhattisgarh, which need to be looked at individually with much more urgency. And this must be done before the overall national figures completely eclipse the alarming ones coming from this continued Naxal-epicentre, leading to any undesirable re-emergence.

4. Graphs and Charts Prepared by the Author from the data collated from MHA.