Traditionally, India’s West Asia policy was majorly seen through the lens of its huge diaspora residing there, the energy trade and the cultural connect. Over the years, bilateral relations with the region have turned into strategic partnerships and some into comprehensive strategic partnerships. However, India is also concerned about the increasing Chinese presence in the region especially with more investments in the ports facing the Indian ocean and in the special economic zones of certain strategic hotspots. Oman being India’s oldest defence partner in West Asia (Middle East),[1] the access to Al-Duqm port would further help in cementing its foothold in the Indian Ocean Region.

Interestingly, over the last few years, the Chinese have intensified their presence in the Indian Ocean Region and the Persian Gulf. While they have etched a few major deals in the region, the second-largest economy has also invested in the strategic ports/locations entailing it with the Belt and Road Initiative(BRI).[2] India, on the other hand, has shown its competitiveness by retaining and strengthening relationships with nations in the Persian Gulf while also willing to actively get involved to counter the growing Chinese influence in the Arabian Sea and its premises.  For India, the development of the Chabahar port [3] has been in the scheme of things for some time whereas Duqm port is another strategically located port overseeing the coast of Oman in the Arabian sea, which might meet its requirements. India’s gain in accessing the Duqm port [4] is a vital asset in enhancing the port’s strategic positioning and for the broader interests of safeguarding the regional security vulnerabilities.

Strategic Port in the Arabian Sea

The port sits at the north-westernmost tip of the Indian Ocean providing access to East Africa and also to the red sea via the Gulf of Aden. It is a deep-sea port (18 m) with a dry dock facility and comes under the Special Economic Zone at Duqm (SEZD). The port is situated in the Al-Wusta province where habitation is very less compared to the areas near to the Capital, Muscat. It has only been a few years since the coastal town has been identified as a potential Special Economic Zone and there have been rapid developments in Duqm due to the economic and strategic significance it posits.[5] 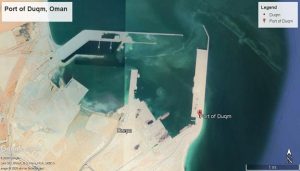 With the signing of the Maritime Pact between India and Oman in 2018 when India’s Prime Minister Narendra Modi visited Muscat, the Indian Navy can now use the port for logistics and support with an eye on sustaining long term operations in the region.[6] This would also assist in keeping a check on the piracy issues in the East African coast as well. The usage of the port for military related purposes would enhance India’s strategic outlook in the region given that it has already been able access the Chabahar port for its development and further trade connectivity. However, with China already gaining entry into Iran, it is crucial in India’s point of view to have access to another port in the region, especially one with a military use and this is where Duqm fits in. While China has roped in Gwadar and Djibouti ports for further military use and invested heavily in Abu Dhabi port,[7] its economic expansions through BRI may turn into a possible economic and strategic threat to India’s interests in the extended neighbourhood in the long run. Hence, India through Duqm port would be keen to keep track of the developments of its northern adversary’s regional ambitions.

In the last few years, China’s BRI and its accompanying capital outlays have gained prominence in the Indian Ocean Region and the investments in the ports are part of it. Incidentally, the SEZ at Duqm is also backed by a share of Chinese capital where a China-Oman Industrial park is developed within 12.72 sq. km.[8] Apart from them, investments from the United Kingdom, United States of America and India are also prevalent at Duqm.[9] Interestingly, India is constructing a consolidated tourism project name ‘Little India’ at SEZD, spanning around 60,000 sq mtr. This will allow Indian expats to buy property there and would be receiving residential visas as well. Indian companies have invested around $1.8 million in the SEZD.[10] Moreover, the Sultanate offers 4 sea ports and as many equal amounts of economic/industrial free zones- all overseeing the Arabian Sea and Indian companies are increasing their footfall in these zones as well. The attractive part of the SEZD is that it offers around three decades of corporate tax exemption, zero percent customs duty, complete foreign ownership, usufruct agreements, no restriction on repatriation of profits, no income tax, currency exchange freedom and a stable currency; it would also have airports to support the seaports and also warehouse facilities for storage.[11]

Map 2. Connectivity to major Ports in the Indian Ocean Region 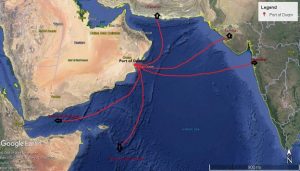 Source: Google Earth Pro and Annotated by the Author.

Given that India has been investing in connectivity projects and routes, Duqm port seems to be an enduring option to assist Chabahar port and in accessing East Africa and other parts of the Gulf. More than 70 percent of trade to India, especially oil and gas comes from the region. Moreover, as India’s Indo-Pacific strategy is still being discussed along with the effectiveness of the Quadrilateral, the port of Duqm would play a pivotal role in the long run as it is considered to be one of those ports which are strategically positioned in the Indian Ocean Region.[12] With Assumption Island in Seychelles being developed along with Agalega in Mauritius,[13] port at Duqm seems to fit into India’s proactive maritime security roadmap. From Map 2, it is evident that the port would help trade to be economical in nature and further allow the India- Oman trade to flourish in the future as well.

Being India’s Oldest Defence partner in West Asia, Oman and India have signed various Memorandum of Understanding (MoU) especially the one on Military cooperation which was first signed in 2003 and later renewed in 2016, which is the most significant, as it strengthens the bilateral defence ties. Apart from this there has been MoUs on cooperation on Maritime Security, between coast guards of both nations and in other areas of concern, giving an enduring foundation for strengthening institutional associations. Indeed, keeping Duqm in mind, there is a broader scope for cooperation in building strategic oil reserves as India has already invited Oman for the same being a significant importer of oil from the latter.[14]

With the Maritime Transport Pact signed in 2019 between the two nations [15], it has only enhanced India’s ambition to expand its footprints in the region and to focus on bilateral and regional security aspects more closely. Over the last two years, there has been an increase in Indian activities and traffic at Duqm. Military exercises were also held in 2019 [16] and various submarines and naval war ships were also stationed at the port. Indeed, there were also naval deployments for longer periods for improving surveillance and cooperation at the port as well. However, India’s major aim is to deter any threat posed by the Chinese activities in the Arabian Sea as they are adding their bases/ presence in the vital extended Neighbourhood and Duqm seems to be a reliable fit to keep a check on these issues.