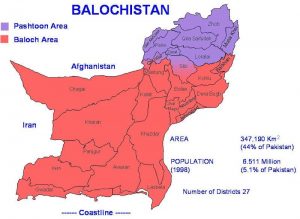 Even after seventy years of independence, Balochistan has been described as an “edgy place” It is a boiling pot of ethnic, sectarian, militant violence, secessionism and terrorism which is threatening to boil over at any time. A multi ethnic region sharing 2/3rd of Pakistan coast line, 40 percent of the trade transits and 180,000 sq. km exclusive economic zone which lies untapped, and is a potential zone of future conflicts and explorations.

Balochistan presents a mosaic of conflicts and fault lines with multiple layers of violence, these range from those between the Baloch Nationalists and the State; intra-tribal and inter-tribal conflicts; and clashes of ethnic division; sectarian and terror strikes with forced disappearances and mass murders. Moreover, the frequency with which the people have gone missing and how their tortured bodies turn up after some time, certainly has added bitterness to this conflict.

The step motherly treatment started from the very inception of Balochistan’s merger or rather forced accession to Pakistan which was based on mistrust. The Human Rights Commission of Pakistan (HRCP) described the situation in the province as an active volcano that may erupt anytime with dire consequences and the situation is alarming and worsening by the day

What have we received from the people of Pakistan except neglect, pain and anguish is the lament of the Balochi people? Balochi narrative hinges on the terrible memories and injustices of the times they were forced to accede to Pakistan. Many Baloch believe that state of Kalat as it was known then, was never even part of India, the British violated solemn treaty arrangements by treating it as an Indian state just prior to their departure. They believe that Pakistan is guilty of forcing its accession in March 1948. This issue resonates even today and is an important reason why many Baloch have not reconciled to this forced accession to Pakistan.

The domination by Punjab and exploitation of their vast natural resources only made them feel that they are being colonized. A famous Baloch saying, “a Baloch may be born without socks on his feet, but when he grows up every step that he takes is on gold”. Hence their treasure of minerals, energy resources is one of the main factors behind the turmoil in the province. The feelings of alienation have been sworn by the continued military oppression; serious human rights violations; the exclusion of Balochi people in the decision pertaining to mega economic projects of Gwadar and CPEC and the anxiety of converting into a minority. The feeling of alienation has been further spiked with the continuous and undeterred military operation, rising enforced disappearances and kill and dump policies. When a Baloch compares himself with his counterparts in other provinces especially Punjab.  He rightly asks what has he gained by remaining within Pakistan? A Human right commission report states. “a sense of deprivation and suppression is deep rooted in the Baloch national identity, the establishment’s failure to negotiate and compensate further isolates a population that has long been put up with armed and aggressive tactics to curb the struggle for their rights.” For Baloch, this together with the social-economic disparities and lack of provincial autonomy, has made the conflict essentially one over identity to preserve their culture, language and ultimately all that it means to be a Baloch.

Jinnah’s regarded Islam as a glue for binding the nation. Such was contrary to what Islam preached as pointed by Maulana Abdul kalam Azad,” Pakistan is being demanded in name of Islam, the division of territory on the basis of religion is a contraption devised by the Muslim League. They can purse it as their political agenda but it finds no sanction in the Islam or the Koran.”. Jinnah’s concept of using Islam as a binding factor for the people of Pakistan without giving importance or due recognition to their distinct identity of them being a Balochi, Sindhi, Pashtun or Bengali. Walin Khan best exemplified this identity dilemma, “I have been a Pashtun for thousands of years, Muslim for thirteen hundred years and a Pakistani for just over forty”, hence clearly for him and for others the specific ethnic identity was more important than being a Pakistani citizen. The creation of the state based primarily on Islamic identity created a host of issues when faced with the people like Baloch whose tribal tradition were more secular in nature, or for Bangladeshi, for whom, language was more important than religion.

The creation of Bangladesh demolished the thesis that Islam could provide the glue that could bind the different nationalities and secondly, it reinforced the feeling that provincialism and provincial autonomy would lead to the dismemberment of the state. Therefore, any form of provincial rise or nationalist movements became an anathema, and the only instrument used to crush the movement was the military. For example, in 1977, President Zia expressed similar sentiments when he met the Baloch leaders in jail. During the meeting, Zia told them that ‘we are all Muslims, and we should not say that we are Baloch or Pashtuns’. The Baloch leader Mir Ghaus Bakhsh Bizenjo replied that ‘we are Baloch and Pashtuns and we will never make a viable Pakistan except on that foundation’.

The central govt narrative is that a small number of tribal sardars are creating trouble in order to maintain their privileges and power and misleading the Baloch. But the Pakistani government has not been able to explain convincingly why so many Baloch especially in the non-tribal areas in Makran post have taken arms against the Govt.?

The causes of the insurgency are not only historical and legal nature but also gross economic exploitation. The denial of gas to the Balochi people themselves when they are the sole providers of the same for decades; indiscriminate use of airpower by Iran and Pakistan has left a bitter legacy; overbearing presence of the Pakistan military moreover; the flux of large number of Chinese and Punjabis are only adding to their vows and converting them into a minority in their own land.

According to the Government’s Budget White Paper 2015-16, ‘for the last fifteen years, the overall share of Balochistan in the national Gross Domestic Product (GDP) has remained constant at 4 per cent’. However, according to a recent study by noted economist Kaiser Bengali during the three decades period 1970s to 1990s, per capita growth was 0.3 per cent, implying zero growth and stagnancy.

The critical resource in Balochistan is the natural gas production which is critical also for Pakistan economy. It provided gas to Pakistan for almost about half a decade but no gas was supplied to it for nearly three decades till 1982.The town of Dera Bugti itself was supplied with gas only in the mid-1990’s, forty years after as was discovered in the district. According to the World Bank Report, Balochistan has the weakest long-term growth, the worst quality of employment and the weakest social development performance of all provinces.[1]

Baloch insurgency has been continuing since last fourteen years and with no signs of dissipating. It is no longer confined to one or two tribes; their women and children too have become involved in the movement giving it a mass base. With the surge in the spirit of nationalism, the Baloch movement is certainly transforming into a nascent nation.

The international Crisis group summary, “the military can retain control over Balochistan territory through sheer force but it cannot defeat an insurgency that has local support, the insurgency is not likely to recede, nor will Islamabad manage to dampen the Baloch, Moreover, politically and socially also the Baloch believe that their secular democratic mindset is not compatible with the religious fundamentalism and dictatorial behaviour of the Pakistan state ruling elite”.

Chief Justice of Pakistan, Mr Iftikhar Chaudhary summed up the conundrum best,” we are all responsible for the destruction of Balochistan ourselves. Balochistan is a warning of the real battle for Pakistan, which is about power and resource and if we don’t get it right, we are headed for a major conflict”. Baluchistan is a test case of Pakistan resolve not only to hold Pakistan together but also to weld the various nationalities into a larger whole, however it is doing just the opposite.

(Synoptic of the talk delivered by Mr. Tilak Devasher on Oct 16th, at CLAWS)

China’s Military Diplomacy in New Era and Implications for India