On October 14, all post-paid mobile services were restored in J&K.[i] The temporary, preventive measures were taken anticipating malicious activities by Pakistan and other radical elements to destablise the situation in Jammu and Kashmir (J&K).

Pakistan upped its psychological operations and diplomatic offensive against India’s internal decision to de-operationalise Article 370 and Article 35A and bifurcate the state of J&K into union territories of J&K, and Ladakh, even as Pakistan’s economy continued to sink with a depreciating Pakistani rupee, mounting external debts, and a balance of payment crisis. Perhaps Pakistan does not realise that these steps are legally tenable, within the provisions of the Constitution.

While the international community has more-or-less rightly accepted the fait accompli presented by India as her internal matter, there is insufficient Indian narrative to counter malicious and false propaganda, especially by Pakistan. The government may hence consider dedicating a special section of the website india.gov.in to international readers, especially the international media, explaining its rationale and/or perspective on various issues of relevance. The government must also ensure its wide circulation and readership.

While some crucial points with regard to the August 5 decision were raised in some sections of the national media, it perhaps didn’t form a part of the larger, international discourse. These were –

On China’s intervention, the United Nations Security Council did hold a meeting on Jammu & Kashmir, but an informal and closed-door one without any formal pronouncements. It is pertinent to note that China itself is in possession of two parts of J&K, the Shaksgam Valley (illegally ceded to China by Pakistan in 1963) and Aksai Chin (occupied by China post 1962). It may be noted that China provides no real autonomy in these (or any other) areas, with the local statutes requiring the approval of the National People’s Congress.[iv] Moreover, China has been urged to “allow meaningful access to Xinjiang” by several countries and international organisations.[v]

While Pakistan is shouting herself hoarse on India’s internal issue of modification of Article 370, it conveniently overlooks the issue of Gilgit-Baltistan (G-B) – Indian territory of J&K illegally occupied by it. It was Pakistan which first revoked the ‘special status’ of J&K by abolishing the State Subject Rule in G-Bin 1974.[vi] This resulted in Pakistanis from outside G-B purchasing land in G-B and changing its demographic profile (Shia character) and bringing in Punjabi and Urdu influence. In fact, the so-called ‘Azad Jammu and Kashmir’ High Court had declared G-B a part of the so-called ‘Azad Jammu & Kashmir’ in 1993! This decision was, however, overturned by the Supreme Court of Pakistan. In 2018, Pakistani Prime Minister Imran Khan gave an in-principle approval to accord the status of a ‘provisional’ province to G-B, in line with the recommendations given by the Sartaj Aziz Committee.[vii] This made the administrative affairs of G-B more Pakistani Prime Minister-centric.

Expressing “deep concern” over the India’s modification of Article 370, the Organisation of Islamic Cooperation (OIC) called for the respect of the “fundamental rights” of the people.[viii]This is almost facetious given the dubious record of the member countries on fundamental rights, and the fact that earlier this year, the OIC commended China for its efforts “in providing care to its Muslim citizens”.[ix] The entire world knows about the suppression and the state-led detention of the Uighurs in Xinjiang. The OIC’s statement is more reflective of the economic realities than social realities.

The Way to the Heart of the ‘Awaam’

The issue of J&K is multi-faceted and requires a whole-of-government approach. It is exigent for the government to keep the ‘ummeed’ or hope of the people alive and win them over psychologically. The communication blackout, closure of schools, damage to business, etc. would have significantly led to an increased feeling of alienation, distrust, and dismay. Hence, it is imperative that the people, especially the youth, see development and feel emancipated. The government also needs to restore communication services, including internet connectivity, post-haste. It should be ensured that ‘governance with accountability’ is provided to the people with focus on infrastructure development, health, education, and provisions for the disabled and marginalised communities, including sexual minorities. In this regard, the following points are of relevance – 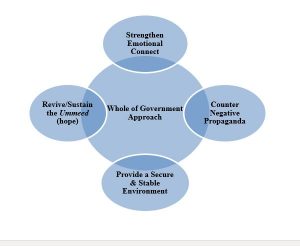 [x] Chonker, A. and Ramanujam, K. (2018). Mapping of Perceptions in Jammu and Kashmir: The Way Ahead. Centre for Land Warfare Studies, p.40.