The standoff in Eastern Ladakh has opened a Pandora’s box of force employment measures which have now transcended from lethal use of physical force resulting in casualties on both sides, to adopting measures to intimidate predators and to dissuade them from attacking[2]. This nuanced application of force or rather non-application of force has presented commanders on ground and planners at all levels with novel challenges which need to be countered with succinct operational guidance to commanders and to troops in contact with the adversary. But before one does that it may be prudent to understand the dialectic that China or PLA has posed.

Mounting costs, risks and public anathema towards waging war are raising the importance of Power to Intimidate (PTI) capability of a nation. India and China both may find it increasingly hard, costly and risky to use kinetic military force to counter the perceived threats to national security that will appear in the years to come. While there may be no alternative to military force in some circumstances, policymakers need better non-kinetic military options from which to choose. Such measures cohered with skilful diplomacy and effective economics, may be relied on to deter a determined aggressor. With the limits of both kinetic military power and soft power in mind, there is a need to explore the space in between, i.e. non-kinetic military ways of coercing, deterring, weakening and punishing those that threaten peace, security and national interests.

India’s response to the declining “usability” of force need not be limited to the kinetic realm. Because India has relied so heavily on a one-dimensional use of force that conventional force application has become synonymous with power exertion. In fact, the ability to affect the calculus and channelise the behaviour of opposing states covers a wide range, from using or threatening to use force, to organising international isolation and inflicting economic pain, to supporting domestic opposition, to influencing media and shaping perceptions, to diplomatic arm-twisting, negotiating, and rapprochement in varying measures in isolation or in a comprehensive package offering a multitude of options,  must be the cornerstone of India’s National Security Strategy.

On the contrary, Chinese military analysts have meticulously studied the use of armed force during the 1991 Gulf War and during the Balkan conflict. They have noted with great interest in the integration of military strikes and psychological warfare activities, and the increasingly strategic role that the mass media played during both operations.[3]

The unfolding of events in Eastern Ladakh has demonstrated PLA’s propensity to play mind games carelessly and therefore,  one must confess with a candidness that it has at some level had an effect on the planning parameters on which the Indian Army response has been predicated. Demonstrations and shows of force have been the basic operational methods of conducting psychological operations. Demonstrations were used in ancient times, as detailed in the “Thirty-Six Stratagems of War[4]” ─ a collection of Chinese proverbs and instructions for winning at war. Dǎ cǎo jīng shé[5] has been on display from Day One of the stand-offs. Be it the riot gear worn by PLA troops or carriage of Guangdao, a medieval weapon at the sub tactical level to the massing of forces in broad daylight in areas where the terrain doesn’t permit its employment in the operational domain or be it the strategic signalling executed by Global Times or Xinhua, to influence opinions domestically as well as internationally can be inextricably linked to the agenda of installing caution and forcing India’s hand with respect to force deployment and positioning. 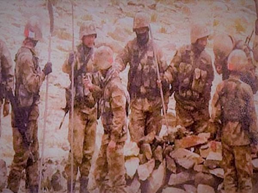 A great example of the tactics of winning by intimidating is Napoleon’s army. They used what was called the “Napoleonic column[7]” when in battle. This was an inefficient way to use “musket men”. The math doesn’t work as there is a relatively small front line and an enemy putting a line of muskets across the column had a definite numeric advantage. These columns worked very well for a long time because they looked very intimidating. Superior forces with better tactics would run away.

While military actions can be used for compellence, PLA has attempted non-kinetic military intimidation. Options of this class offer non-violent ways of threatening pain until the target state complies with their demands or amends its Course of Action (CoA). The intimidation power of China has been incorporated in its strategy to achieve the desired end. Compared with projecting offensive military power, PTI is less difficult, less costly, risk-averse and non-destructive, yet it can still be effective. While tactical and operational intimidation may not afford the total control over the enemy’s response, the adversary’s ability to respond offensively would surely wane. Unlike soft power, PTI could obviate the need to use force under the right conditions, or is at least worth attempting prior to a decision to use force.

At its best, PTI can offer the “effect of victory without violence”. The easiest distinction is that intimidation, unlike hard kinetic power, does not involve using military force to produce the desired outcome. Should PTI be regarded and used as a rung in an escalation ladder that starts softly and, if need be, concludes with military force? It certainly can be. Indeed, intimidating measures are more likely to work when the adversary has reason to believe that force will be used if they do not.  Intimidation can work only if backed by the threat of force. PTI could be used as the penultimate rung on an escalation ladder. But when not reinforced by the threat of force, coercive measures by other vectors need to be all the more severe.

Information technology has made it possible to influence operations to become both a strategic resource and a method. PLA is exploiting many mediums including social media platforms to launch an “acerbic” assault on the Indian psyche, planting false information in the command-information system, creating misperceptions among decision-makers and influencers with malafide intent may be able to penetrate the cognitive space of the nation thus executing an Omni-directional influence operation. Intimidation by using influence operations, as well as statecraft employing it, will include economic sanctions, punitive political measures, cyber operations, covert intelligence operations, military collusion, propaganda, constriction or manipulation of trade. These instruments as a package have the potential to bend policies, break the will or weaken the resolve of states at the receiving end.

China’s efforts to influence and shape public discourse and political outcomes within India have gone well beyond the kinds of legitimate public diplomacy that all governments engage in. The wave of influence operations has thrown a spotlight on once little-known department within the CCP─ the United Front Work Department (UFWD)[8]. Under Xi Jinping, who calls the UFWD a “magic weapon” for the great rejuvenation of the Chinese people, United Front work has been dramatically expanded and elevated within the party. As described by Laura Rosenberger and John Garnaut, “the UFWD guides and controls an elaborate network of proxies and front organisations[9]” which are used to reward, intimidate and coopt the overseas Chinese community, its civic and business associations, student groups and Chinese language media—as well as academic institutions, politicians, and others with influence. The goal is to “win hearts and minds” of overseas Chinese and other influential targets and unite them in support of the CCP and its goals while neutralising critics. India’s democratic culture, fractured political setup, an overtly healthy shot of freedom to press and transparency may prove to be absolutely fertile ground for Chinese intrusion into Indian domestic domain if it has already not done so.

Intimidation by the military and influenced by other vectors of national power play a role in international relations that is neither new nor confined to situations like now that are on a verge on a major conflict. It is a permanent feature of the foreign policy of China.  It currently remains unrivalled in its intentions and capabilities to use intimidation against its neighbours till India decided to step up and confront China. Beijing had judged that its efforts had yielded effective results and the frequency and sophistication of these challenges is expected to increase. China will continue seeking fissures within the region and will try to exploit any opportunities to erode cohesion of other nations. China will most likely employ both direct and indirect actions, and closely synchronise these activities across the spectrum of national institutions, while concurrently keeping its activities non-kinetic, thereby complicating effective policy responses. As President Xi faces increasing internal pressure, it might even conduct more aggressive intimidation. To conclude, China is likely to remain the most active and aggressive hybrid threat actor for India.

[5] Do something spectacular (“hitting the grass”) to provoke a response from the enemy (“startle the snake”) to have them give away their plans or position. Do something unusual, strange, and unexpected to arouse the enemy’s suspicion and disrupt their thinking.

CAPFs as part of Theatre Commands

Intern Articles Maryam Rehan Masood - July 20, 2021
0
Kai-Fu Lee is a celebrated computer scientist, born in Taiwan, raised in America and now settled in Beijing. This book is divided into two...

Intern Articles Abraham Martin - July 19, 2021
0
Iran: Cyber ​​Repression, a book published by the National Council of Resistance of Iran, is an ideal revelation of state-backed cyber warfare focused on...

Intern Articles Abraham Martin - July 19, 2021
0
Countdown to Zero Day, written by Kim Zetter, is about Stuxnet, malware or virus designed to roll back and stop Iran's nuclear program. The...