War is not always fought by weapons or military but psychologically too, where psychology is used to defeat an enemy or sway it at the very least. Psychological Warfare is not a new concept but one whose evidence can be seen throughout history. This warfare can also be called propaganda war or war of the mind since it helps in influencing the opinions, emotions, and behavior of the enemy. According to Michael T. Stevens paying attention, observing and being able to judge the strong and weak points of your enemy can be your psychological weapons, and the influence of religion, pseudoscience and superstitions make the enemy vulnerable.[1] Charles H. Smith, on the other hand, conceptualized Psychological warfare and explained it as Political Power, Ideological Power, Economic Power and Military Power, which are- what we desire, what we believe in, how we can attain those wants and how prepared we are to achieve what we want respectively.[2]

Psychological Warfare is conducted at a strategic, operational and tactical level.[3] Various means are used to support this warfare like television, radio, books, magazines, newspapers, or brochures. One of the main examples of this can be World War II where pamphlets were used to weaken and deter the enemy and shake their faith in their leader.[4]

Pakistan in recent years has been an ardent user of Psychological warfare against India. ISI- the Inter-Services Intelligence has been on the forefront and has played an important role in executing several Pakistani proxy wars over the years. The role of the agency though was later expanded to suit and guard the interests of the politicians and favoring and fostering military rule. It has been keenly interested in the Kashmir region and has been consistently monitoring the developments of unrest and violence as well as instigating them unceasingly. The capabilities of the organisation were mainly put to test when the Soviet Union invaded Afghanistan, which led to it becoming more prominent with the support from the CIA and Saudi intelligence.

For decades the Jammu and Kashmir region has been a play board for Pakistan’s psychological warfare and a major security issue for India for decades. As Jinnah in one of his speeches said ‘Jammu and Kashmir is the jugular vein for Pakistan’.[5] Pakistan has used various means to implement its psychological warfare but this article focuses on twitter as a tool for the same.

Social media has become the main center for warfare and the use of twitter for this warfare is the new constant. Pakistan is taking advantage of it to further its propaganda against India and the twitter platform is being abused by Pakistan, considering the misinformation it has been spreading on twitter and if it continues, the trail of erroneous and inaccurate accusations it might end up losing its credibility along with its integrity. The twitter account operated by DG ISPR was set up in December 2016 and despite having been created in 2016, this account has 845 tweets as of 23 July 2020, and a following to follower ratio of 0 to 3.9 million, which shows the tremendous impact it has generated globally in just a span of four years.

The spurt in this platform is very visible and various agendas and hashtags to create misinformation have been doing the rounds on the social site some of which include #GobackModi- which was have been in use since 2019, #ChaosInIndia-can be traced to April 20, 2020 and #Islamophobia_In_India- 23 March 2019. These hashtags have been doing the rounds since 2019 and have trended on twitter. Pakistan’s ISPR is famous for spreading fake news and creating tensions, this was specially seen with respect to the abrogation of article 370 and was seen round the clock on DG ISPRs twitter handle.

Thousands of youth of the country have been trained and used by ISPR, a noble agency for spreading fake news and propaganda against India. They have also made them believe that the work they are doing is no less than that of a soldier and they are fighting a narrative war with India. To further boost the morale of the youth and get the work done the ISPR awards them when an individual is successful in creating a buzz on the social media and the individual with the most retweets on social sites like Twitter and Facebook gets the award which includes jobs and contracts with Fauji Foundation. [6] Several twitter handles also came in the limelight when the names of the account were changed to those of Arab royalty like @pak_fauj changed its name to @SayyidaMona who is an Omani Royalty and posted anti-India tweets about the ties between India and the Gulf. [7]

Twitter is being used as a tool for building narrative wherein Pakistan is showcasing itself as a peaceful country that wishes to maintain peace in Kashmir and the Region prominently whereas it is itself one of the major causes of instability. All the while playing the victim card and accusing the Indian Army of targeting the civilians in Pakistan occupied Kashmir. The former Director-General Asif Ghafoor has been called out time and time again for sharing misleading information on social media, but a change in narrative has been observed from Major General Asif Ghafoor (2016-2020) to the present DG ISPR Major General Babar Iftikhar. The former Director-General had been time and time again lauded for expressing his viewpoint on pertinent and topical issues as well as his assertive stance on India, his tweets were accusing and direct. The present Director-General, on the other hand, has a different approach and is seen shedding light on how the civilians are being attacked and killed by the Indian troops.

According to a report released by The Freedom House in 2019, an international internet rights group, Pakistan is one of the most restricted countries in the world for internet laxity and was placed 26 out of 100 in the world and in the 3rd position regionally. [8] The analysis of the report can be that majority of the public do not have access to internet thus making twitter inaccessible. Does this mean that the twitter account operated by the DG ISPR is focused more on creating an anti-India sentiment throughout the world than to constitute an impact internally?

The tweets by Pakistan against India can be categorised in two aspects:

There has been an overflow of tweets related to the unprovoked ceasefires by the Indian troops and the violation of the ceasefire agreement. Such tweets have become a common occurrence on their twitter, appearing almost every second day whereas tweets related to the Jammu and Kashmir region, see an increase during the time nearing their independence day. Moreover, Pakistan has always monotonously asserted that it is India that violates the ceasefire and targets civilians in their land. Such tweets have increased since the abrogation of Article 370. The Chief of the Indian Army has denied these allegations and stood their ground. Few examples of the tweets are showcased at below: 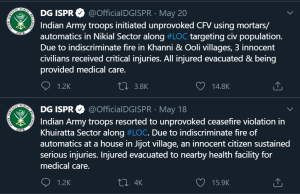 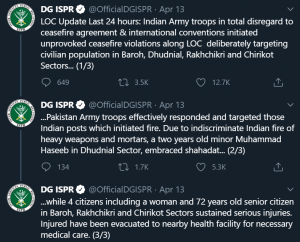 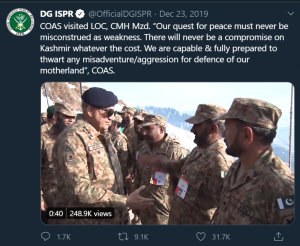 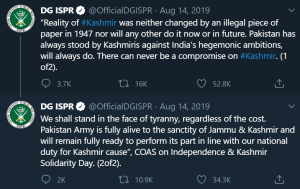 Pakistan, ready to always perform its national duty for Jammu & Kashmir. Their independence day is also observed as Kashmir solidarity day and the tweet right after this was on 15th August to observe a black day on India’s independence day to protest against the decision taken for Kashmir.  (Source: Twitter DG ISPR) 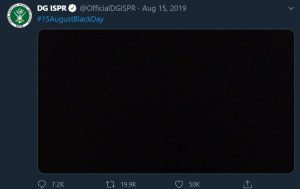 This is the tweet right after their independence in 2019 where they observed a Black Day on  15th August India’sindependence day to protest against the decision taken for Kashmir. (Source: Twitter DG ISPR)

Therefore, twitter in the current times acts as a means and an actor to Pakistan’s Psychological Warfare in which the ISPR plays a pivotal role. As per the regulations and laws set by twitter the handles that practice hateful conduct, violence, terrorism/violent terrorism are reprimanded and even removed.[9] Since the partition of India and Pakistan in 1947, psychological warfare has been a tool that has been used time and time again to sway people, create chaos and mistrust. The Pakistan ISI and ISPR have also savored the feud of the Jammu and Kashmir region and have tried pushing their narratives and carrying out several proxy wars. In times to come, the saga of twitter being used and abused will continue and only increase manifold. Hence, it seems like the right time for the Indian policymakers to take appropriate countermeasures against the cyberwar being initiated by Pakistan.

[1]Michael T. Stevens. “Art Of psychological Warfare: How to Skillfully Influence People Undetected and How to Mentally Subdue Your Enemies in Stealth Mode.” 2016.

Gaurica Sethi is an intern with Centre for Land Warfare Studies