Revenue vs Capital Expenditure and how rising manpower cost is adversely affecting defence modernisation and operational preparedness of the armed forces, is discussed often, especially in run up to the presentation of annual budget. A perception has been generated as if, armed forces are expending the entire allocation on pay, allowances and maintenance of forces and not on creating any assets. The Govt, as also the Ministry of Defence (MoD) has been highlighting the imbalance between Capital and Revenue Expenditure and emphasising that the defence forces need to improve this ratio. Army is especially ‘pillared’ on this account because our Revenue and Capital Expenditure ratio stands at 83 : 17 as compared to Navy whose ratio is 52 : 48[1], while that of Air Force is 55 : 45. While the figures can’t be disputed, the rationale for the same needs to be put across to the Govt officials as well as the academia  and general public to correct the misplaced perception.

Army, Air Force and Navy operate in completely different environment and therefore, require diverse resources to meet their operational requirements. Comparison between the three services and the categorisation of ‘What is Revenue’ for Army suffer from serious lacunae. Army by its very nature is ‘Manpower Centric’, whereas, Navy and AF are ‘Platform Centric’. Air Force and Navy cannot execute operations without weapon platforms, which costs exponentially higher than individuals who man these systems/ weapons. However, that is not the case in army. Infantry, the principal fighting arm, for example has its strength in bayonets. Thus, the man who wields the bayonet to take on the enemy, both in peace and war, should rightly be called as ‘Capital Asset’ rather than being part of ‘Revenue Expenditure’.

In addition to above, it is also highlighted that expecting a substantial increment in the defence budget (under Capital Head) may not be feasible unless the policy makers make an unexpected departure from the current thought process while allocating budget, which seems improbable. Therefore, the article will focus to carry out ‘Perception Management’ & also to suggest an alternate mechanism for calculating capital expenditure for Indian Army, thereby correcting the perceived imbalance between Revenue and Capital expenditure.

Some of the statistics with respect to defence budget for the year 2018-19 are as under: – 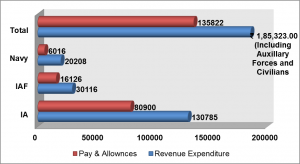 Revenue Budget.  The revenue budget of the defence forces has seen a modest increase in the past few years. However, the growth has been neutralised by the rising expenditure on the pay and allowances of the personnel. For the current year, 73.29% of the revenue allotment has been apportioned towards pay and allowances and balance for operations & maintenance. Amongst the services, Army being the largest service, accounts for bulk of the expenditure on this account and thus perceived to be responsible for imbalance in revenue and capital estimates of the defence budget. The same needs to be seen in light of the following:-

Nation’s Necessity of a Large Standing Army.   The strength of the armed forces of the nation including the land, air and naval component is dependent on the envisaged security threats. India faces a multi-dimensional threat across the spectrum ranging from full scale conventional war to low intensity sub conventional operations. Large land frontiers, active borders and unabated internal security problems, necessitate maintenance of large land forces. Even advanced countries such US & UK, despite not facing a direct threat to their land borders or coastline and access to high end technologies, maintain a larger component of land forces as compared to air & naval component and consequently higher budgetary allocations[6].

Keeping in view the inescapable requirement of maintaining a large standing army and need for capital intensive expenditure on Air Force and Navy, the imbalance in revenue and capital outlays for IA is likely to stay. However, some of the measures mentioned below will help in better management of the available resources besides creating better perception regarding utilisation of revenue budget:-

The current ‘approach’ towards defence budgeting without awarding due weightage to India’s geostrategic threats and IA’s operational requirements emanating from a  hegemonic China& radical Pakistan will only lead us to a troubled future. In order to counter the impending threats effectively, it is imperative that based on the economic growth and globally accepted parameters for defence spending, adequate resources are made available for modernisation and sustenance of Indian Army.

The outcry against increasing revenue expenditure, especially on account of ever increasing manpower costs is primarily due to lack of knowledge and understanding of complexities in which the army is operating. It must be appreciated that “War is Human Endeavour” and any weapon or technology without human interface will become partially or fully ineffective. That notwithstanding,    restructuring of the budget by apportioning the expenditure incurred on payments to combat arms from the capital head will go a long way in correcting the skewed ratio between revenue and capital outlays, leading to better perception with respect to utilisation of funds by Indian Army.