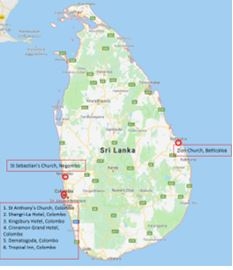 As a series of eight blast tore through Sri Lanka in and near the capital on Easter Sunday, the world watched on in horror as one blast after another continued to pile up the dead and the injured. Leaving 359 people dead[i] and another 500 injured, the attacks targeted churches and high-end hotels in what appears to be a coordinated attack. With the details of the attacks still coming in from the Sri Lankan government, this article focuses attention to the manner in which the suicide attacks took place, and argues that such attacks targeting a single community may result in upending the careful balance between the ethnic groups established in Sri Lanka after three decades of civil war – something that the governments must prevent from happening again.

Just as the clock stuck 8.45 am on Sunday, 21st April morning, the first suicide explosion took place at St Anthony’s Church in Colombo, ripping through the hundreds gathered in the pews for the Easter mass. Minutes later, a second suicide bomber ‘queued up at the hotel buffet and set off the blast’[ii] at the iconic Shangri-La Hotel in Colombo, destroying the tranquillity of a Sunday brunch. And then in a series, six other suicide attacks and bombings took place targeting the capital, Colombo, and the cities of Negombo and Batticaloa, as shown in the map below. The most devastating attack since the end of the civil war in Sri Lanka took the lives of at least 359 people, including at least 39 foreigners[iii], and left hundreds others injured.

The news of the attack, the largest of its kind targeting South Asian Christians in recent times, disrupted Easter celebrations across the world. World leaders including Narendra Modi, Imran Khan, Theresa May, Donald Tusk, Jean-Claude Juncker and Vladimir Putin condemned the attacks and expressed their sympathies to the victims. May called the violence “truly appalling” and said that “no one should ever have to practise their faith in fear”[iv]. Addressing a crowd in St Peter’s Square at the Vatican during his Easter message, Pope Francis said: “I learned with sadness and pain of the news of the grave attacks, that precisely today, Easter, brought mourning and pain to churches and other places where people were gathered in Sri Lanka.”[v]

The bombings come after a decade of relative peace and calm in Sri Lanka, though ethnic tensions have prevailed since then. What is unprecedented though, is the scale of destruction and violence targeting the Christian community, which makes up roughly 7% of the population[vi], and has never been the focus in any ethnic conflict in recent memory. The coordinated attacks were carried out by single suicide bombers in each of the locations, except for the Shangri-La Hotel in Colombo, which was carried out by two suicide attackers. It also appears that the Sri Lankan government was made aware of the attacks on the churches in advance, but political squabbles amongst them led to no action taking place, or the Prime Minister[vii] being informed of the same.

Sri Lankan government has identified National Thowheet Jama’ath[viii], a small Islamist terrorist organization in the country as the perpetrators of the attack, though they suspect an international hand in the planning and coordination for the attack. ISIS[ix], however, has claimed responsibility of the attack. After its brief report claiming responsibility for the attack though previously unknown and unlinked channels, the group announced through its Amaq News Agency on April 23 a formal communiqué along with photos of the attackers. The photo shows the men lined up, but instead of the seven attackers mentioned in the report and the communiqué, eight men are shown. The ISIS communiqué notes that ‘the attacks primarily targeted Christian churches and hotels in which foreigners were present, and involved 7 martyrdom-seeking attacks and several explosive devices’.[x]

However, we must be sceptical of the claim, since ISIS has a tendency to say that it has a hand in various terrorist attacks without claims to back it up. Given the downward trajectory of the group in recent times, claiming credit for the Sri Lanka attacks could be understood as one of two things for ISIS. One, it could be simply a way of trying to retain any level of international focus and attention on the group, especially given the demise of the central leadership. We must also note that the first report of the claims was made by the group through a previously unknown channel. Second, it is possible that with the demise of the central core group, many of the fighters belonging to Sri Lanka had come back to their country to set up a cell – thereby making this their first attack as ISIS in Sri Lanka. ISIS has given more weightage and independence to local groups and cells to carry out attacks against all non-believers any where it may find them. As Rita Katz noted, ‘The Sri Lanka blasts were both sophisticated and well-coordinated, making it very likely that the attackers received some sort of training and assistance from ISIS — possibly from one of the group’s bases in the Philippines or elsewhere in the region’[xi]. The Sri Lanka attacks could then be the first of many in the country.

The Sri Lankan government, while seemingly inactive with the advance intelligence received on the possible attacks, showed fast response in the immediate aftermath of the attack. The government cut off access to Facebook and WhatsApp[xii] across the country to avoid the spread of misinformation and initiated a curfew while it got the situation under control. A crude, homemade six-foot long pipe bomb was found near Colombo’s main airport, and was successfully defused by the Sri Lankan air force[xiii]. Most importantly, the Sri Lankan police almost immediately arrested 24 people[xiv] in connection to the attack, and by Tuesday, the number had gone up to 40[xv], and continues to rise as the article is being written, suggesting that the government knew where the key members of Thowheeth Jama’ath could be found. The group was under surveillance, and the authorities had learned as far back as January that radical Islamists possibly tied to the group had stockpiled weapons and detonators[xvi].

The devastating Easter attacks have certainly rocked the country that had only just managed to maintain peace after over three decades of intense violence among the different ethnic groups. This careful balance can be easily upturned by fanatics and community leaders in asking for retaliation and increase in violence levels against other minority groups. Seen along with the failure of the government to stop the attacks despite prior knowledge, and the president and the prime minister already engaged in a bitter feud[xvii], it is entirely possible that Sri Lanka experiences a downward spiral of violence and hatred for some time to come.

What is more important from a terrorism analysis and policy directive purpose is to grasp the extend of ISIS support and activities in the country and the region in general. Intelligence agencies in the region would have to continuously monitor the group and its activities as it tries to set up shop in South Asia with the help of local affiliate. The threat of frustrated travellers and returning foreign fighters from the fields of Levant must not be underestimated.

Finally, the government and the NGOs in Sri Lanka must now work together to ensure that the communal tensions already simmering due to decades of violence and mistrust among the communities does not dissolve into another civil war, this time involving even the Christian and Muslim communities, which were previously not involved in the feud between Hindus and Sinhalese majority. The international community too must stand together with the people and government of Sri Lanka as it goes through tremors in the aftermath of such a devastating attack.