In a recent development, the Arakan Army, an ethnic armed group that operates in the Rakhine and Chin states of Myanmar and is designated as a terrorist organisation by the Myanmar government[1], has hinted at levying “taxes” on India’s infrastructural projects in its area of domination. This comes as a serious concern amidst already growing apprehensions regarding the security of Indian assets in the country.

Myanmar is not only crucial for eliminating India’s Northeast Insurgency, but is also a country of crucial strategic importance for India in the Southeast Asian context. Being a convergent country for two of India’s flagship policies (‘Act East’ and ‘Neighbourhood First’), it is looked at as a gateway of India to Southeast Asia. The Kaladan Multi-Modal Transit Transport Project (KMMTTP) is considered as the first significant step in that direction. Having signed the project as a memorandum between India and Myanmar in 2008, the project is finally on its last leg after exorbitant delaysand cost fluctuations. It holds the potential of not only connecting India to Southeast Asia, but also overcoming India’s chicken’s neck syndrome. 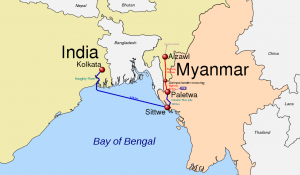 Of late, the sequence of events involving the Arakan Army has increased threats to the project’s completion and operation, thus raising Indian concerns. An incident involving abduction of five Indian workers attached to the project, wherein one of them died due to cardiac arrest while in custody, took place only in November 2019. Previously, on March 30, the same year, a civilian vessel carrying logistics for the Paletwa bridge (a part of KMMTTP) was set ablaze and three crew members were abducted. The announcement regarding “taxing” the project in its area of domination by the AA comes as the third instance of an aggressive assertion of its authority in the region. Although, in a coordinated operation with the Myanmar Army (in February-March this year), almost 12 of AA camps were claimed destroyed[2], judging by the sequence of events that followed, it hardly seems to have acted as a deterrent for the insurgent group.

What is the Arakan Army?

Founded by Major General Htun Myat Naing in 2009, the Arakan Army is an Arakanese Buddhist armed group that dominates the Rakhine state of Myanmar.It currently holds a cadre strength of over 7000 and demands for a confederate status for the Rakhine state. With swelling local support, the AA has become among the largest ethnic armed organisations (EAOs) of Myanmar. The Myanmar government in turn has designated it as a terrorist group and violent clashes with casualties on both sides have been on a rise.

A significant part of India’s KMMTTP passes through the Rakhine state which is controlled by the AA. Since this project is a result of a memorandum signed between the governments of the two countries in consideration, it is often perceived as a venture of the Myanmar government. Consequently, it is looked at as an existential challenge for the insurgents asserting authority in Rakhine. The AA chief recently mentioned that Indian companies can “carry out their work but they must inform us (them) of their plans”, thus urging to negotiate terms with the group for securing their investments.[3] Letters regarding the same are expected to be delivered to the Indian Embassy, as also to Indian companies. While local businesses claim that this taxation system is aimed at generation of funds, most experts opine that this is more about a stronger assertion of authority in the Rakhine state.

Two things become important to note in this context. One, the AA’s welcoming attitude regarding development projects as far as they are kept “informed” hint at a tangible interest of the group attached with these projects. They will not only bring tangible trade gains for the investors, but also improve navigability and instigate spillover developmental effects for the region, thus benefiting the outlawed group. Two, owing to the military muscle of the India Security forces (and a recent crackdown of AA camps in Mizoram), the AA is reluctant to call for a direct confrontation. The AA, on a number occasions has vocally clarified their intentionsof cooperation with India’s interests instead of any direct confrontation, provided that their stakes in Rakhine are acknowledged. Their demands for direct“negotiation” with the AA, instead of that with the Mynamar government, for projects in Rakhine, only clarifies this assertion of authority. India has not acknowledged this “authority” as of now.

What is interesting to note here is the role taken over by the Chinese in this conflict between the EAOs and the Myanmar government. The extent of Chinese investment in the country, as it has grown in the recent years, cannot be denied. With Myanmar taking an active part in China’s Belt and Road Initiative (China-Myanmar Economic Corridor – CMEC), being host to oil and gas pipelines running to Yunnan province of China, along with the strategically important Kyaukphyu port at the southern branch of the CMEC, the growing Chinese footprint on Burmese soil is not an encouraging sign for India’s interests in Southeast Asia. Interestingly, the Kyaukphyu deep sea port also falls in the Rakhine province. The Chinese stakes in the country, consequently, are equally high. In this regard, China has been mediating for ceasefire between the Myanmar government and the EAOs since 2017. The last such mediation meeting was held only last week, on December 14, in Kunming, Yunnan. It ended in a stalemate.

It must be kept in mind that China and Myanmar share a love-hate relationship with frequent instances of clashes and convergence of interests. Three things must be noted in this regard. One, Chinese economic and strategic stakes in Myanmar are very high. It has invested close to USD 20 billion in the country on various projects.[4] Owing to severe local opposition on grounds of adverse environmental and humanitarian impacts, a number of its projects have been scaled down by the Myanmar government, which has hit Chinese interests. Two, while China has been shielding Myanmar against allegations with regard to Human Rights violations on various international fora, its tacit support to rebels on Burmese soil have been earning frequent backlash. In a public statement by the Myanmar Army in November this year, displeasure was expressed over seizure of a cache of Chinese arms from an insurgent group in Northern Myanmar. In fact, some experts also believe that the Myanmar’s ethnic conflicts are used by the Chinese as a leverage against their economic and strategic interests in the country. Drawing a link between the rise of ethnic conflicts in Northern Myanmar at the exact time of downsizing of Beijing’s projects in the region around 2011, the then Information Minister of Myanmar hinted at a Chinese role in conflict escalation.[5] Three, China has assumed the role of a “peace broker” between the EAOs and the Myanmar government, but the peace talks including the one held in December 2019, have failed to reach a solution. With respect to the Arakan Army, which concerns India the most, Beijing does not recognise them as terrorists. This directly results in a trust deficit between the Myanmar government and the Chinese. It is notable that some experts believe that the AA shares a patron-client relationship with the Chinese since it is a part of the Brotherhood Alliance that is believed to have significant Chinese influence.[6]

What lies ahead for India?

Putting all of this in perspective, India is expected to act in an extremely calculated and measured manner. What India has at stake is its internal security with respect to the Northeast Insurgency, its economic and strategic assets in Myanmar, and keeping a tap on the growing Chinese influence in Southeast Asia.

While engaging in any military action on Burmese soil is out of question, negotiation with the Arakan Army seems equally improbable. India shares a 1,643 km-long border with Myanmar and insurgents in the Northeast have often used Burmese territory as an escape from Indian Security Forces. Of late, Myanmar has been instrumental in eliminating Northeast India’s insurgent groups and their safe havens through coordinated military operations which has earned India significant gains. On the other hand, AA insurgents too have used Indian territory (mostly in Mizoram) as a safe haven against Tatmadaw, which has been lately checked by the Indian Security Forces. Initiation of acknowledgement of an outlawed group’s authority by India, could adversely affect the bilateral relations thus impacting Myanmar’s role in containing the Northeast insurgency.

On the other hand, the mediation process by the Chinese has failed to bear any result so far. Keeping in mind the trust deficit that already exists between the two countries – Myanmar and China, it could be for India to assume a larger role than it holds in the region currently. While mediation in an internal conflict of a sovereign country could not be one of India’s preferred choices, provided its own stand on foreign intervention for internal conflicts, a larger role played by India could help resolve the issues for both countries. We must not forget that Myanmar is a nascent democracy and its democratisation process is still far from complete. We must also take into consideration that the Arakan Army’s demands, at least as of now, are for greater autonomy, instead of secession. Encouraging a more federal structure in Myanmar by India, which an autocratic country like China could be incapable of doing, would prove helpful in moving towards the awaited conflict resolution. This would involve more nuanced procedures and considerations, and there is no denying about that, but giving a neighbour what India has best – a strong democracy – could kickstart the long overdue process of conflict resolution, thus serving in everybody’s interest.

[4] The Myanmar Times, “Myanmar on Radar as investors shift funds from China”, 24 June, 2019. Accessed on 24 December 2019. Available at: https://www.mmtimes.com/news/myanmar-radar-investors-shift-funds-china.html

[5] The Irrawaddy, “Myanmar’s Generals Make a Show of Displeasure at China’s Arming of Rebels”, 26 November, 2019. Accessed on 23 December, 2019. Available at: https://www.irrawaddy.com/opinion/commentary/myanmars-generals-make-show-displeasure-chinas-arming-rebels.html