The Chinese have exhibited a coercive and intimidating approach in 2020, in South and East China Seas, the Taiwan Straits, Nepal (Mt Everest), Bhutan (Sakteng Wildlife Sanctuary in Eastern Bhutan’s Trashigang district) and Eastern Ladakh.  Without a legal basis, the Chinese actions clearly demonstrate muscle flexing and hegemonic intentions.  These are a part of China’s larger geopolitical aspirations and also reveal a greater willingness to use military force, as was apparent in the induction of 6 Mechanised and 4 Motorised Divisions across Eastern Ladakh.  The Chinese aim was to show their national will and deter India from any quid pro quo military actions. These geopolitical ambitions, and the will or intent to employ military force to achieve those ambitions, is a major futuristic challenge for India.

The Chinese aggression in Eastern Ladakh at multiple areas, followed by an intransigent attitude in disengaging, de-escalating and return to pre-May positions, was a first of its kind.  It has forcefully brought home the threat of a conventional war in the high altitude areas of the Northern borders and also heightened the likelihood of collusive support by Pakistan. In appreciation of the threat that the People’s Liberation Army (PLA) poses, the Indian Armed Forces have undertaken robust and forceful measures in Eastern Ladakh. There has also been a positive movement in the Government for facilitating essential and emergency defence acquisitions to strengthen the armed forces, fill-in voids where they exist, and allocate additional resources for infrastructure development. However, there is a need to undertake a comprehensive assessment of our warfighting techniques in super high altitude areas. 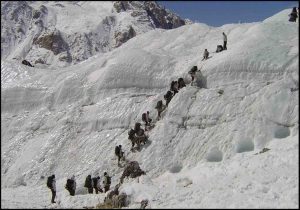 India is a sub-continent, with a wide variety of terrain configurations and extremes of climatic conditions on the borders. The two different adversaries though could collude at the strategic level, have uneven levels of capabilities and contrasting pattern of operations. Hence, planning for conventional operations in India has to perforce follow sectoral and theatre level specificities, in equipping, training and, most importantly, in designing the methodology of conduct of wars. This peculiarity mandates on the operational commanders at Command and Corps levels to plan the design of battles, task, train and equip the forces almost independently for each theatre, particularly in areas like Eastern Ladakh that remain cut off from the rest of the country for five to six months in a year. It also envisages a heightened level of operational logistics and management to overcome the difficulties in rapidly mobilising resources into remote, high altitude areas. 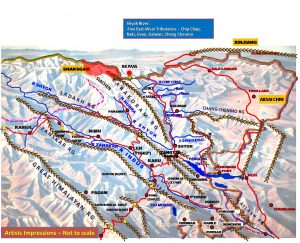 A very broad mention of terrain configuration in Eastern Ladakh will be in order. The 1000km Eastern Ladakh frontage is walled by the two tiers of masssifs of Karakoram, Cheng Chenmo, Pangong, Kailash Ranges and Saser Brangza (an offshoot of Karakoram) and Ladakh Ranges. The Shyok River in the North, the Pangong Tso in the middle and Indus River in the Southern Sub-Sectors, are near-parallel to the LAC, between these two massifs.  There are limited passes, gaps, axes and laterals, and river valleys (like Chip Chap/ Galwan/Cheng Chenmo/ Indus) that could facilitate PLA movement from the Western Highway – the G219, to the Line of Actual Control. With the terrain’s distinct peculiarities, the movement for both the defender and the aggressor in the battlefield is limited to ‘Go’ areas for the tanks and mechanised vehicles that is, along these narrow valleys and gorges, defiles and passes. The exploitation of natural and man-made features, and its analysis and interpretation, predict the effect of the terrain on military operations.  In the super high altitude areas as obtaining, terrain analysis employing geospatial information, of heights and plains, passes and valleys, rivers and water sources, presents a basic visualization of operations to support decision making.

Knowing the enemy, his appreciated intent, the pattern of operations and perceived end state, forms the basis of all planning.  The Chinese have invested greatly in the Strategic Support Force (SSF) and configured critical new domains in “informationalized” 21st-century warfare – space operations, cyber, electronic warfare and signals intelligence, among others. Offensive operations across the electronic medium will employ electronic jamming, electronic deception, directed energy weapons and electromagnetic pulse radiation. The PLA also views cyber operations as an independent means to subdue the adversary by achieving information dominance. The PLA Second Artillery Forces was renamed as the PLA Rocket Force (PLARF) in 2015 and made a full service like the army, navy and air force. With a vast array of short and medium-range ballistic missiles, the PLARF could conduct well-planned strikes against key Indian targets. Such a campaign can be undertaken by long-range precision attacks by rockets, missiles and air forces, to destroy important targets, paralyze operational systems, and destroy war potential, creating favourable conditions for further operations.  The vast range of options available to the Chinese includes the covert cyber targeting of civilian/ national infrastructure with plausible deniability and overt attacks on military infrastructure and defences at the border areas.

While the PLA would hope that standoff attacks cause major military damage, victory cannot come without a defeat of the Indian Army on the ground in Ladakh. With offensive operations at Kargil War 1999 as a general indication, PLA has to bring to bear a major force asymmetry to contemplate operations against the battle-hardened and experienced Indian troops, occupying well-constructed linear defences. To obviate the severe terrain restrictions, PLA may resort to using of the third dimension, but inevitably, the aggressor has to finally capture and control dominating heights.

In order to combat the PLA offensive in Eastern Ladakh, a suggested warfighting methodology could be designed around the following:

Though conventional war may not be on the horizon, the Chinese aggression prudently demands preparations for the same in right earnest. Northern Army and Western Air Command, formations/ bases and units have to jointly design, orchestrate, and coordinate ground and air operations, and plan tactical operations within the overall campaign objectives.

Decentralisation of ground, tactical operations will have to be the norm in super high altitude areas.  Most importantly to succeed in this terrain, we must train our tactical leaders to think and operate to be – innovative, bold, risk-takers, independent in thought and action.  Undertaken asymmetrically and by segregated TFs and small teams, operations in various sub-sectors would entail manoeuvres, engagements and battles that would make up the overall campaign. From this perspective, the success in tactical level operations has the potential to translate into achieving an operational and even a strategic victory. The operational planning and acquisition plans, hence, should also commence from strengthening the IBGs and TFs.

Articles Dokku Nagamalleswara Rao - October 3, 2022
0
Tensions along the Line of Actual Control compelled India to give away its symbolic South China Sea Policy. It is worth taking time to observe...