Conflicts in recent times have become increasingly complex. It is widely held that the nature, intensity, and frequency of conflict has changed in recent years, shifting from direct conflict between states to insurgencies, guerrilla wars, terrorism, organised and large-scale criminal violence, and protests.[i] This generally good trend in “successful” conflict reduction at national levels often conceals latent, simmering, or persistent conflict at subnational and cross-border levels.[ii] Border regions are widely recognized as hotspots for latent conflict, driven by a variety of intersecting factors such as unresolved colonial tensions, unclear or contested border demarcations, the historically porous nature of border regions, natural resource competition, and the “less-” or “un-” governed nature of many such areas. According to Goodhand, subnational conflicts with substantial trans-border dynamics are the most common and long-lasting conflicts in South and Southeast Asia, affecting half of the region’s countries.[iii] The trans-border kinship of identity groups can lead to a regional spillover of violence, for example, the Balkans in 1990.[iv]

Language/ethnicity, tribal rivalry, migration, ownership of local resources, and a pervasive sense of exploitation and alienation have all culminated in violence and various demands from various Indian insurgent groups (IIGs).[v] The demands range from sovereignty to an independent state or homeland in some cases, or simply better living conditions for the ethnic groups they claim to represent.[vi] As per the latest MHA report on insurgency in the North-East, about 16 major insurgent groups are active in the region. However, the cross-border ties and strategic alliances that these groups have, work as force multipliers, complicating conflict dynamics.[vii] The region is sure to be tumultuous, with insurgent demands ranging from secession to autonomy and the right to self-determination, as well as a multitude of ethnic communities clamouring for special rights and the safeguarding of their identities. These insurgent groups have links across the border. They acquire arms, recruit and train their cadres, and engage in illegal activities such as vandalism of public property, bombings, extortions, the murder of innocent civilians, Security Forces personnel, and attacks on/abductions of government employees, politicians, and people in business.

Background of the security problem:

Three major hill communities — Kachin, Naga, and Zo – live on both sides of the Indo-Myanmar border and are transborder people.[viii] Presently, the Kachins are primarily found in upper Myanmar (formerly known as Kachin Hills). They are also found in parts of India’s Assam, and China’s Yunnan province. 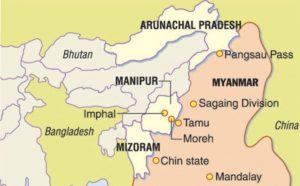 The northeastern Indian states of Mizoram, Manipur, Nagaland, and Arunachal Pradesh share a sensitive 1,640-kilometre border with Myanmar.[ix] What happens in Myanmar ultimately has its ramifications on these bordering states. Myanmar’s challenges from 26 armed insurgency groups are far more significant than the Rohingya crisis. Only 17 of these organisations have agreed to a ceasefire, while the rest continue to use violence and challenge the Myanmar government’s authority. Often it has been witnessed that there have been strong differences between the Government and Tatmadaw. India shares a border with Kachin State, Sagaing Division and Chin State. In Myanmar, ethnic minority-populated provinces are called states, whereas Burman-populated areas are referred to as divisions.[x] The civil war in Myanmar is intimately connected to the conflict in the North Eastern States of India. The Kuki-Chin-Mizo ethnicities, who moved from Myanmar in the last century, have settled in large numbers in the border areas of Assam, Manipur, and Mizoram.[xi] These ethnic groups share ethnicity in Myanmar, where the borders are unfenced, and Naypyidaw is hardly in charge. The Nagas, who live on both sides of the border, have the same disdain for the International Border (IB) as the Pashtuns have for the Durand Line. Th Muivah, Isak Chisi Swu, and SS Khaplang were part of a 140-strong ‘China Group’ that resisted the Shillong Accord and founded the National Socialist Council of Nagaland (NSCN) from bases inside Myanmar after returning from China. The United Liberation Front of Asom (ULFA) began sending its cadres to Myanmar’s Kachin Independence Army (KIA) for military training in 1988. The United National Liberation Front (UNLF), along with the NSCN(K) and the ULFA, formed the Indo-Burma Revolutionary Front in May 1990 to launch a “united struggle for the independence of Indo-Burma.” Manipur-based insurgent groups UNLF and People Liberation Army (PLA) and smaller groups of Kukis and Zomis have built camps. These insurgent groups acquire weapons on the Sino-Myanmar border from surreptitious sources. Some of these weapons are manufactured in China’s Yunnan province, while others are made in Myanmar’s northeastern gun factory. Because of their close relations with China, Myanmar’s largest rebel group, the United Wa State Army (UWSA), acts as a broker for Chinese-produced guns and sells weapons from their arms factory near Panghsang.[xii] Paresh Barua, the ULFA’s army head, is believed to be hiding in Myanmar’s Taka with a significant number of cadres. Taka is a PLA base near Chindwin River.

China’s role in the cross-border insurgency

China’s Special Envoy for Asian Affairs, Sun Guoxiang, has emerged as a virtual mediator in the peace process with Myanmar armed factions such as the Kachin Liberation Army, Ta’ang National Liberation Army, Kokang Alliance Army, and the formidable United Wa State Army (UWSA).[xiii] Ambassador Sun travels freely between Myanmar and Kunming, Yunnan Province’s capital, meeting with representatives of armed separatist organisations. The UWSA has been granted extensive firepower in China over the years, including armoured vehicles, AK-47 rifles, assault weapons, and supposedly surface-to-air missiles.[xiv] In Myanmar, these groups also make a lot of money from drug trafficking and illegal mining. The strong ties that these organisations have with Indian separatist groups like ULFA have accompanied China’s support with armed separatist groups in Myanmar. These advances have been supplemented by the formation of the ‘United National Liberation Front of Western Southeast Asia,’ a Myanmar-based organisation of insurgent groups operating in India’s northeastern states (UNLFW).[xv] The UNLFW includes the National Socialist Council of Nagaland (Khaplang), the United Liberation Front of Assam (ULFA), the Kamtapur Liberation Organisation, and the National Democratic Front of Bodoland.[xvi]

New Delhi should keep pressing Myanmar to take action against these Indian insurgent organisations and their Myanmar allies. In the past, joint/coordinated operations[xvii] by the Indian and Myanmar armies were launched against similar insurgent organisations. Most significantly, New Delhi may like to appoint a dynamic person, who is fully aware of the situation in the region and can balance the interests of the locals as well as the Government.

While Myanmar has resisted Chinese efforts to carry out projects on its soil that are opposed by the public, such as the $6 billion, 6,000 MW Myitsone dam[xviii], China will continue to use pressure to get its way, as it did with the Hambantota Port in Sri Lanka. China is constructing vast energy, manufacturing, and transportation corridors across Myanmar to connect its landlocked Yunnan Province to the rest of the country.[xix] India has been careful in its investments in Myanmar’s significant industrial and infrastructure projects. ONGC has been successful in its offshore natural gas exploration efforts. India’s Institute for Information Technology in Mandalay and the skill development centres created around Myanmar with Indian support have received high appreciation.[xx] Moreover, under India’s Technical and Economic Cooperation Programs, hundreds of Myanmar students study on scholarships and take courses at professional institutes in India. While China completes projects quickly, it is well accepted that India takes an excessive amount of time to approve and implement development initiatives. While China may receive praise for its economic and military support to Myanmar, its commercial exploitation and meddling in Myanmar’s domestic affairs may provoke a backlash, similar to the wrath and violence directed at the Chinese in Myanmar in 1967.[xxi]

Although India recognises the ties between cross-border groups, it has placed a greater emphasis on security rather than the region’s political, cultural, and economic issues. The biggest worry for India remains the potential of China to extend its military might via Myanmar. Commentators have proposed that promoting economic growth, offering cultural recognition to minorities, opening political space for insurgent organisations, and cracking down on armed rebels could help calm the region’s tensions. These measures failed partly because they were unable to account for challenges that existed outside of India’s boundaries. New Delhi will have to move beyond a simple military strategy in Myanmar to integrate political, economic, and cultural components in its counterinsurgency strategy. While New Delhi may prefer to avoid direct advocacy of democracy, it might assist Myanmar with border law enforcement and recommend measures to facilitate economic and cultural relations.

[v] Insurgency in the North-East. The Ministry of Home Affairs. Accessed on 10 January 2022.  https://www.mha.gov.in/sites/default/files/InsurgencyNE_20092021.pdf