On July 26, violent clashes erupted between the Assam and Mizoram police forces which led to the killing of Assam police personnel and injuring many civilians at contentious border point Lilapur in Cachar district of Assam. However, this is not the first time that a clash between the states has happened. In October-November last year, the locals from both the states clashed against each other. The locals on the Assam side blocked the trucks carrying goods to Mizoram [1]. On the other side, the Mizoram security forces are seen digging trenches and building bunkers along the borders [2]. The situation turned ugly on October 17 when the 20 shops were burned, and more than 50 people from both sides were injured.

The dispute between the two states dates back to the British colonial era. In August 1875, the British had drawn a boundary between the Lushai Hills (now Mizoram) and the Cachar plains (now district in Assam). Mizo people believe it was the only time it was done with the consultation of their chiefs [3]. Later in 1933, the demarcation of the boundary between Lushai Hills and the then princely state of Manipur was done. This demarcation turns out to be the real bone of contention as Mizo people do not accept it and point to the demarcation of 1875, which is derived from the Bengal Eastern Frontier Regulations (BEFR) Act,1873 (also known as the Inner Line Regulation).

Mizoram, also known as ‘Lushai Hills,’ was part of Assam and became a union territory in 1972 and later became a full-fledged state in 1987. It shares a 164 km long boundary with Assam. The Assam district of Cachar, Hailakandi, and Karimganj shares a border with Kolasib, Mamit, and the Aizawl district of Mizoram. Both the states have accused each other of encroachment of land. The first clash broke out in 1994, seven years after the formation of Mizoram [4]. Despite the several rounds of a talk organized by the central government between both the states, the tension remained.

Current Scenario and Reasons behind the Clash

The clashes between both the states have underlined the fault in demarcating state boundaries within the country. The intensity of the clash can be understood from the fact that the state governments of both the states have booked officers on each side officially under various sections of the Indian penal code, including the chief minister of Assam [5]. Making the matter worse, the Assam government has even issued an advisory to people not to travel to Mizoram and asked its people staying in Mizoram to exercise utmost caution [6]. On the other hand, Mizoram is constantly accusing Assam’s miscreants of blocking National Highway (NH-306) and removing railway tracks leading to economic blockade in the state [7]. NH-306 is considered the lifeline of Mizoram as it connects the state to the rest of the country. Later, to maintain the status quo, the ministry of home affairs deployed a neutral force, i.e., CRPF, to avoid further clashes between the state forces. The central forces are deployed at the NH-306 and on the disputed border until the peaceful resolution. Of late, both the states have issued a joint statement and show a willingness to defuse the ongoing inter-state border tension through discussion. The joint statement stated that – “Both the states shall not send their respective forest and police forces for patrolling, domination, enforcement or for fresh deployment to any of the areas where confrontation and conflict has taken place between police forces of the two states in recent times. This would include all such areas along the Assam-Mizoram border in the districts of Karimganj, Hailakandi and Cachar, Assam; Mamit and Kolasib districts, Mizoram,”[8].

However, merely deployment of central forces and maintaining the status quo will not augur well for the overall peace and tranquility of the region. The border dispute of this kind lays its root in its formation. The policy adopted by the authority to curb the different states out of greater Assam needs a thorough review. The state boundaries were carved out against the local perception of traditional boundaries [9].

Assam has major border disputes with Arunachal Pradesh, Meghalaya, Nagaland, and Mizoram. The Nagas were the first to demand redrawing of the map for greater Nagaland, and the dispute had its root in its formation in 1963. Major clashes along the Assam-Nagaland border have been reported in 1968, 1979, 1985, and as recently as 2014 [10]. Following the Assam-Mizoram border clash, Assam has signed an agreement with Nagaland to diffuse the standoff at the eastern front [11] and is working with Arunachal Pradesh to fix border disputes without the intervention of the court[12]. Assam shares an 804.1 km long boundary with Arunachal Pradesh, and border disputes between both states occur following the Arunachal Pradesh refusal to accept 1951 notification as to the basis of boundary delineation [13]. Arunachal argues that the plain areas transferred to Assam after the recommendation of the Bardoloi committee are not done with the consent of its people.

Similarly, the fallout of reorganising the state of Assam without the consent of the local people can also be seen along the Assam-Meghalaya border. Meghalaya was carved out of Assam in 1970 and became a full-fledged state in 1972. However, Meghalaya has declined to accept the transferring Block I and Block II of Jaintia hills to Mikir hills (in Assam) and areas in Garo hills to Goalpara district of Assam [14]. 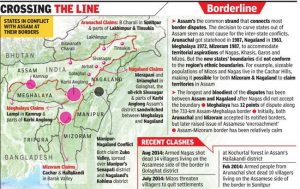 Thus, the core reason for these clashes revolves around the people’s quest for identity. The fear of being alienated and overpowered has been deep-rooted in the mind of the northeastern people. They push their energy to protect their identity, culture, and ancestral land more than craving for infrastructural development projects.

It is a rare sight that forces of two states are clashing against each other. The Northeastern region remains one of the most fragile regions of the country. All the aspects of national security, i.e., insurgency, drug trafficking, terrorism, and many more, is found in the northeastern state. In a region like such, land boundary dispute among the state is the least one can think of. Following the various policy initiatives by both the state and central government over the subsequent year, the situation and ground reality of the region has changed a lot. The northeastern state remains at the fulcrum of India’s ‘Act East Policy,’ aiming to connect India to the Southeast Asian countries, reaching up to ASEAN.

The persistence of state-boundary disputes shows the lack of political will and vested interest of the various sections of the society. It must be the duty of the state and the central government to spread awareness among the locals to ease tension and resolve the dispute peacefully. The previous efforts of the government to resolve the dispute did not bear the desired fruit as the recommendation of the appointed committee was not binding on the states [15]. Further, merely appointing a committee following the clash will not do good until and unless the fixing of borders revolves around the needs and aspirations of the local people across the two states.

To ensure the peaceful resolution of the inter-state boundary dispute, both the center and state must focus on the following aspects:-

The speedy resolution of border disputes is necessary, given that the central government has invested heavily in the region over the last decade. The resolution of these border disputes will improve the overall connectivity, employment opportunity, livelihood, and make the northeastern state the doorway to southeast Asia, and enhance the scope of India’s ‘Act East Policy. ‘However, if the focus remains on maintaining the status quo, the time is not far that these border disputes will turn into major internal security threats for India.